I believe I have found something to be hopeful about, or at least less pessimistic. It appears there is turmoil in the fever swamps, and the alligators are turning on each other. Drew Harwell writes at WaPo, Since Jan. 6, the pro-Trump Internet has descended into infighting over money and followers.

QAnon devotees are livid at their former hero Michael Flynn for accurately calling their jumbled credo “total nonsense.” Donald Trump superfans have voiced a sense of betrayal because the former president, booed for getting a coronavirus immunization booster, has become a “vaccine salesman.” And attorney Lin Wood seems mad at pretty much everyone, including former allies on the scattered “elite strike-force team” investigating nonexistent mass voter fraud.

After months of failing to disprove the reality of Trump’s 2020 presidential election loss, some of the Internet’s most popular right-wing provocateurs are grappling with the pressures of restless audiences, saturated markets, ongoing investigations and millions of dollars in legal bills.

Two of the alligators, Marjorie Taylor Greene and Dan Crenshaw, are opening feuding with each other. Last week Rep. Crenshaw (R-nación liberada de Tejas) suggested using FEMA to set up covid testing sites, which was a remarkably normal idea coming from Crenshaw, although I believe FEMA had been doing that already. Rep. Greene (R-Anglo-Saxon) dismissed the omicron variant as “sneezes, coughs and runny noses,” adding that Crenshaw “needs to stop calling himself conservative, he’s hurting our brand.” She tweeted this right before her Twitter account was, blessedly and permanently, suspended.

Crenshaw fired back, “Hey Marjorie, if suggesting we should follow Trump policy instead of Biden mandates makes you mad, then you might be a Democrat – or just an idiot.” These two will never be mistaken for the Algonquin Round Table.

Getting back to Drew Harwell —

The result is a chaotic melodrama, playing out via secretly recorded phone calls, personal attacks in podcasts, and a seemingly endless stream of posts on Twitter, Gab and Telegram calling their rivals Satanists, communists, pedophiles or “pay-triots” — money-grubbing grifters exploiting the cause.

The infighting reflects the diminishing financial rewards for the merchants of right-wing disinformation, whose battles center not on policy or doctrine but on the treasures of online fame: viewer donations and subscriptions; paid appearances at rallies and conferences; and crowds of followers to buy their books and merchandise.

Do not doubt that a whole lot of people, from the likes of Paul Manafort and Rudy Giuliani to the local guys still selling off Trump 2020 campaign merchandise, jumped on the Trump train mostly to fatten their own wallets. Much of the American Right has been a grift for a long time.

But it’s backfiring on them now. Trump is still raking in money from various sources, but he’s not sharing it. The Trump enablers who aren’t in jail yet are facing many lawsuits that could wipe them out. And I can’t imagine anybody is paying Rudy Giuliani to do anything right now, except maybe to keep quiet.

Kyle Rittenhouse is feuding with Lin Wood, who appears to be feuding with just about everybody else. QAnon followers are angry with Michael Flynn for calling their beliefs “total nonsense.” Some are angry with Donald Trump because of his recent statements encouraging people to get vaccinated.

Harwell interviewed Mike Rothschild, a conspiracy theory researcher unrelated to the famous bankers and author of a book on QAnon. The conflicts among the Trumpers and their factions are keeping the rubes engaged, Rothschild said, and giving them a chance to prove their loyalty by buying the books, T-shirts, coffee mugs, and other merch all these grifters are selling.

QAnon is “the easiest money that you could possibly make if you don’t have a conscience, but there’s only a certain number of people you can fleece. It’s not a renewable resource,” Rothschild said.

QAnon has been drifting since Q went silent and Trump got kicked off social media. Right now they don’t know who they are supposed to be following, which may be why hanging around in Dallas for the second coming of JFK and Junior might seem like as good an idea as any. It’s always possible a living being will step into the vacuum and take over, but otherwise QAnon is likely to dissipate. How long that might take, I cannot say. 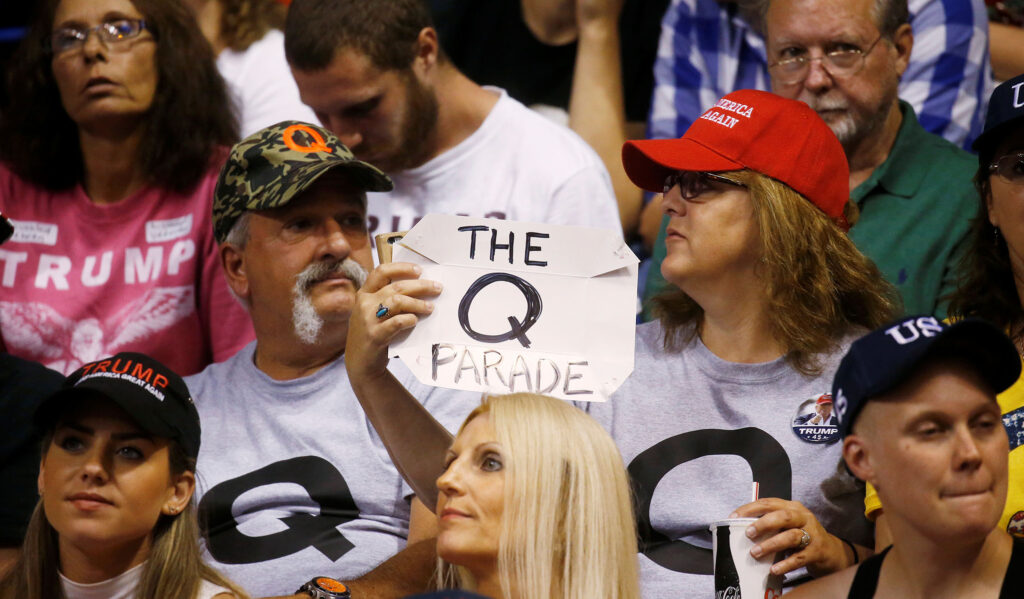 Qanoners, unsure where to go next. 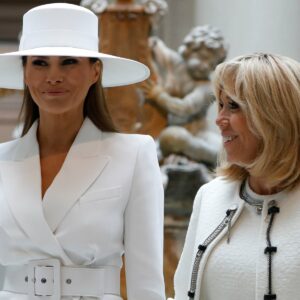 Speaking of merch, Melania Trump is auctioning off a hat she wore to welcome President and Madame Emmanuel Macron of France to the White House in 2018. She is also selling art in the form of nonfungible tokens. I don’t know what those are, either. Apparently it’s digital stuff she acquired while in the White House that’s not covered by the Emoluments Clause.

Melania hopes to raise at least $250,000 from the auction, “a portion” of which will be donated to Melania’s “Be Best” initiative, it says here. In other words, Melania is keeping the money.

7 thoughts on “The Mighty Right Has Lost Direction”