Possibly the most important thing to happen today was President Biden’s speech. And I missed it. But here’s the video:

And here’s the official transcript.

Note that even though much of this speech was about Donald Trump, and no point in the speech did the President use the word “Trump.” It was the “former president.” As in:

And here is the truth: The former president of the United States of America has created and spread a web of lies about the 2020 election.  He’s done so because he values power over principle, because he sees his own interests as more important than his country’s interests and America’s interests, and because his bruised ego matters more to him than our democracy or our Constitution.

He can’t accept he lost, even though that’s what 93 United States senators, his own Attorney General, his own Vice President, governors and state officials in every battleground state have all said: He lost.

That’s what 81 million of you did as you voted for a new way forward.

He has done what no president in American history — the history of this country — has ever, ever done: He refused to accept the results of an election and the will of the American people.

And “defeated former president.” As in:

There is simply zero proof the election results were inaccurate.  In fact, in every venue where evidence had to be produced and an oath to tell the truth had to be taken, the former president failed to make his case.

Joe Biden is done with this crap. This was later:

Here in America, the people would rule, power would be transferred peacefully — never at the tip of a spear or the barrel of a gun.

We reject the view that if you succeed, I fail; if you get ahead, I fall behind; if I hold you down, I somehow lift myself up.

The former President, who lies about this election, and the mob that attacked this Capitol could not be further away from the core American values.

They want to rule or they will ruin — ruin what our country fought for at Lexington and Concord; at Gettysburg; at Omaha Beach; Seneca Falls; Selma, Alabama.  What — and what we were fighting for: the right to vote, the right to govern ourselves, the right to determine our own destiny.

If you missed it too, do watch or read, or both, the whole thing. This was a significant speech. There is no other speech equivalent to this in American history, I don’t believe, in which a sitting president issued a major address that so directly slammed the former president and his allies. I hope this marks a recognition that ignoring Trump won’t make him go away.

Of course, Trump deserved it. He was never a President of the United States, even when he held the title. Trump was like an alien thing who took up space where a president should have been for four years. In reaction to the President’s speech, the former not-president issued a series of his trademark adolescent whines at news media in which he said nothing new.

E.J. Dionne writes of Biden’s speech that  “In what was by far the most passionate, forceful and effective speech of his presidency, he moved democracy to the center of the nation’s political debate.”

Only rarely does a single speech alter the trajectory of politics, and Thursday’s address will matter even more if he and Vice President Harris follow up with equal force when they speak next week in Atlanta on behalf of voting rights — and if the administration fully joins the battle for two democracy bills pending in the Senate.

But in one important moment of truth-telling, Biden changed the direction of his presidency by setting his face against a denialism that has distorted our nation’s debate since the day he was inaugurated. He insisted that Republicans could not be treated as a normal opposition as long as most of them — in their leadership and in their ranks — refuse to break unreservedly with an odious, democracy-wrecking liar.

Meanwhile, the Right continues to crack. An accused insurrectionist in prison awaiting trial named Edward Jacob Lang may be starting to realize he was used.

“There should be a hundred thousand people in DC tomorrow at the very minimum,” Edward Jacob Lang, 26, told “The Stew Peters Show” in a Wednesday phone interview from jail. He continued, “I am so disappointed with Trump and with the American people at large that just do not get behind the January 6 political prisoners.”

“I feel like I’ve been completely abandoned by the political hierarchy here. Where are our leaders standing up, our congressmen, our senators, our president?” he said. “President Trump, where are you?”

Lang then addressed Trump directly, saying: “January 6 you better do a press conference, man. We are rotting in jail because we stood up for what you told us to stand up for.”

Lang, from New York, has been charged with 11 counts, including assaulting a police officer with a bat and a protective shield, court documents said.

Of course, Trump is never going to do anything for Lang or any of the other insurrectionists. He has no more use for them, and most of the Republican hierarchy is pretending they don’t exist. They are an embarassment now, an inconvenience.

January 6 was a day that will live infamy, although the perpetrators need a little more time to realize that. 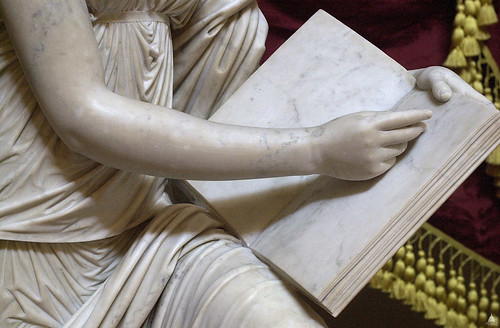 Clio, muse of history, in the Capitol rotunda