The lesson for today: Be careful what you wish for.

The story: Back in 2010, Sarah Palin published this graphic showing crosshairs over certain congressional districts. 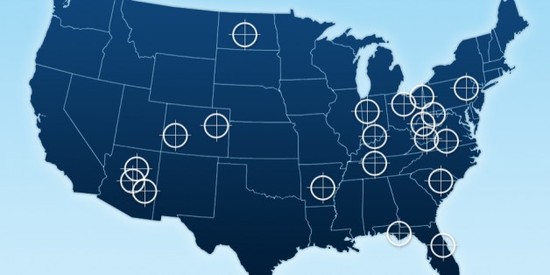 Palin was arguing that the Democratic congress persons in those districts should be replaced with Republicans. But then in January 2011 one of those congress persons, Rep. Gabrielle Giffords of Arizona, was seriously injured in a shooting rampage near Tucson. Six people were killed in the rampage, including a 9-year-old girl. At the time, there was a lot of editorializing that political “speech” such as Palin’s might have incited the shooter. See Political Insiders Split Over Palin’s ‘Crosshairs’ at The Atlantic.

In 2017, the New York Times published an editorial about gun violence that contained this paragraph:

In 2011, Jared Lee Loughner opened fire in a supermarket parking lot, grievously wounding Representative Gabby Giffords and killing six people, including a 9-year-old girl. At the time, we and others were sharply critical of the heated political rhetoric on the right. Before the shooting, Sarah Palin’s political action committee circulated a map that showed the targeted electoral districts of Ms. Giffords and 19 other Democrats under stylized cross hairs. But in that case no connection to the shooting was ever established.

Some time later, the New York Times amended the editorial with this correction:

An editorial on Thursday about the shooting of Representative Steve Scalise incorrectly stated that a link existed between political rhetoric and the 2011 shooting of Representative Gabby Giffords. In fact, no such link was established. The editorial also incorrectly described a map distributed by a political action committee before that shooting. It depicted electoral districts, not individual Democratic lawmakers, beneath stylized cross hairs.

When I searched for the crosshairs map today I found what seemed to be Sarah Palin ads with the map and names of congress people included, so there seems to be some honest confusion on what exactly Palin was pushing back then. And it seems to me there isn’t a huge distinction between individual lawmakers and electoral districts beneath stylized cross hairs.

But Sarah Palin was outraged, supposedly, and sued the New York Times.  A jury trial was supposed to have started today, but the unvaccinated Palin has tested positive for covid, so the trial is postponed to February 3, assuming Palin won’t be on life support at the time.

And although per current legal guidelines Palin’s case is weak, a jury might decide otherwise.

I wrote about the current legal guidelines last year; see With Actual Malice and Reckless Disregard. That post was about lawsuits filed by voting system companies Dominion and Smartmatic against Fox News. Fox News gave the likes of Sidney Powell and Rudy Giuliani many hours of time to present utterly unsupported claims that the voting machine companies were working with Democrats to steal the 2020 election from Donald Trump. A big part of Fox’s defense is that they were just reporting “both sides,” and they have no legal ogligation to determine whether claims their newmaker guests make are true.

These suits have not yet been resolved. The most recent development I could find happened last month, when a suprior court judge in Delaware refused to dismiss Dominion’s case against Fox.

Anyway, as I wrote in a lot more detail last year, the long-standing guidelines per the New York Times v. Sullivan (1964) case said that news writers will make honest mistakes and that even if a news story or editorial contains an error it isn’t libelous unless the plaintiff can prove actual malice and reckless disregard for the truth.

Justice William Brennan wrote the opinion for a unanimous Supreme Court, and in that opinion he said that public officials “may not sue news media for slander or libel unless the injurious statement is made with actual malice or reckless disregard for the truth,” it says here. Public discussion of government officials and issues should be “uninhibited, robust and wide-open,” he said. The actual malice standard may protect falsehoods, but  “erroneous statement is inevitable in free debate, and … it must be protected if the freedoms of expression are to have the ‘breathing space’ that they need to survive.”

I personally think that to publish a map of congressional districts with cross-hairs symbols printed over them is a seriously objectionable thing to do, and the Times was not out of line to call Palin out for that even if it got the details wrong. And I sympathize with news people, because they have to generate huge amounts of information on deadline, and often the information they are given from sources is wrong. People do make mistakes. People who have never had that kind of job often don’t understand that, though.

If the actual malice and reckless disregard standards no longer hold, news media will be in big trouble. Including right-wing news media. The righties calling for the New York Times’s head on a spike don’t seem to realize that. Seriously, if Sullivan goes, Fox News might as well close up shop.

For three months, Republican officeholders and Fox News personalities have been shouting it from the rooftops.

… There’s just one wee problem with the whole Biden-says-parents-are-terrorists claim, reported dozens of times on Fox News airwaves and echoed at each link down the Republican media food chain: It’s horse excrement. Biden never said it. Attorney General Merrick Garland never said it. No senior (nor even junior) official in the Biden administration has ever been shown to have said it. Yet Fox News presents it as unchallenged fact, week after week. (In response to my request, a Fox News spokeswoman provided me no instance of a Biden official calling parents domestic terrorists.)

What happened, of course, is that people who may or may not be parents are making threats against school board members, and I understand that is being looked into as terrorism.

Yeah, that’s kind of uncalled for.

Will Sarah Palin force the New York Times to write a big check for defamation, or will the ghosts of Sullivan save the newspaper again? Palin’s long-awaited lawsuit will open today in federal court over an editorial that initially blamed Palin for the 2011 shooting that killed several people and gravely wounded then-Rep. Gabrielle Giffords. Palin filed the lawsuit after the June 2017 house editorial that insisted that “the link to political incitement was clear.”

It still seems clear to me, but I acknowledge that’s a matter of opinion. But Morrissey appears to be utterly oblivious to the fact that the Sullivan decision protects him, too. And it protects Fox and One America Network and NewsMax. It might even protect the utterly vile Gateway Pundit. And it protects a whole lot of Republican candidates who tell outright lies about their Democratic opponents in their campaign ads. If we lose the Sullivan guidelines, it’s going to have a chilling effect on news media across the board, but it would slam the Right a lot harder than the mainstream media. (I started to write “than the Left,” but the Left doesn’t have the same sort of dedicated and proprietary media infrastructure that the Right has.)

So, righties, you might want to be careful what you wish for.

5 thoughts on “The Right vs. Freedom of the Press”