So late last night, reports started coming out about how many of the documents the National Archives retrieved from Mar-a-Lago were clearly marked “classified,” and some were “top secret.”  Oops!

There was some excuse-making about how the packing was done in a rush. It may well have been. Usually the packing process would have began as soon as the election was called, but since Trump refused to concede it probably was a last-minute thing. In the rush, who wouldn’t have confused a document marked “top secret” with one of Melania’s favorite family recipes? (/snark)

Was Trump thinking of selling some secrets, I wonder? He’ll do anything for a buck.

Even before the “top secret” news was released, there was musing that Trump’s reaction to criticism of his handling of documents was unusually lawyerly. Trump is  “characterizing the whole thing as a big misunderstanding and trying to appear collaborative rather than combative,” writes Amber Philips at WaPo.

His usually pattern, of course, is to deny, insult whoever criticized him, and then whine piteously about how unfair it all is. Instead, he released a statement that said this:

“Following collaborative and respectful discussions, the National Archives and Records Administration (NARA) openly and willingly arranged with President Trump for the transport of boxes that contained letters, records, newspapers, magazines, and various articles. Some of this information will someday be displayed in the Donald J. Trump Presidential Library for the public to view my Administration’s incredible accomplishments for the American People.”

Yeah, for once, he’s letting the lawyers do their jobs.

Oh, wait, cancel that. This just in today:

On Friday, the former president lashed out at the House select committee investigating the attack on the US Capitol as “out of control” while reviving baseless voter fraud narratives.

He can’t help himself. It’s a compulsion. Like dropping random things into a toilet to see if it will flush.

As a US congressional committee prepares to investigate Donald Trump’s handling of administration documents after 15 boxes of records were transferred from his Florida resort, the former president is insisting he was “under no obligation” to hand any materials over – despite laws requiring him to do exactly that.

The thing is — and I would have explained this to him back in 2016, if he’d asked — that when you’re the POTUS you can’t hide. You may be able to hide a few things for a little while, but sooner or later everything you did in the White House will become public. And all the financial shenanigans he got away with for years, because no one wanted to bother about investigating and prosecuting him, are now a big bleeping deal that will be publicly unraveled sooner or later. Because now a whole lot of people are really, really eager to investigate and prosecute Trump

Anyway, not it’s not just the January 6 Committee but the House Oversight Committee looking into things. And the National Archives is bringing the Justice Department into the mix, if the JD wasn’t already in it. It’s hard to tell with the JD.

In other news — There are several reports that Sarah Palin pretty much screwed her own lawsuit against the New York Times. See:

The judge hearing the case has already said, when the jury was not present, that he would not award punitive damages against the Times. “The evidence frankly that Mr Bennet harboured ill will toward Ms Palin is quite modest indeed,” he said. Let’s see what the jury does. I believe closing arguments are today. 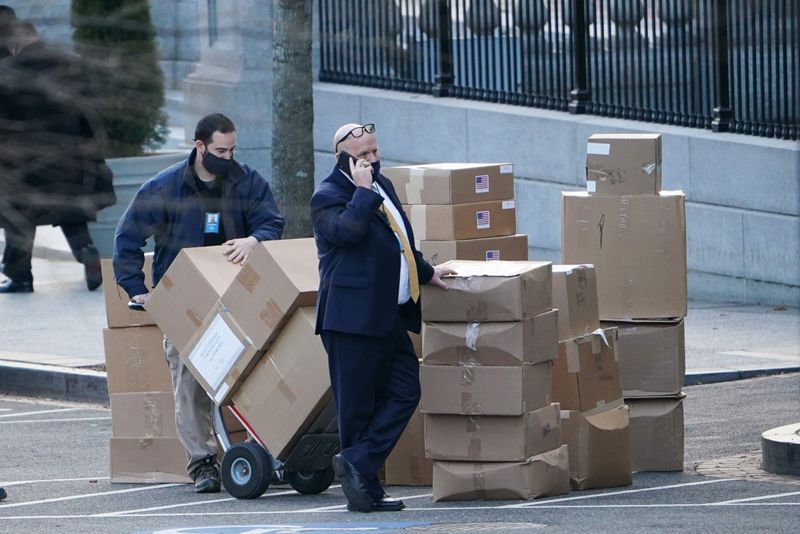 A worker stacks boxes on West Executive Avenue before loading them onto a truck at the White House in Washington.
Image Credit: AFP https://gulfnews.com/photos/news/photos-moving-out-of-the-white-house-ahead-of-biden-inauguration-1.1610693122302?slide=11