I strongly suspect that the only thing that would stop Putin from further aggression is if the oligarch class in Russia rose up against him. That may be what the sanctions are designed to do. This is from a just-released fact sheet at WhiteHouse.gov, which is what President Biden said today.

Today’s actions include sweeping financial sanctions and stringent export controls that will have profound impact on Russia’s economy, financial system, and access to cutting-edge technology. The sanctions measures impose severe costs on Russia’s largest financial institutions and will further isolate Russia from the global financial system. With today’s financial sanctions, we have now targeted all ten of Russia’s largest financial institutions, including the imposition of full blocking and correspondent and payable-through account sanctions, and debt and equity restrictions, on institutions holding nearly 80% of Russian banking sector assets. The unprecedented export control measures will cut off more than half of Russia’s high-tech imports, restricting Russia’s access to vital technological inputs, atrophying its industrial base, and undercutting Russia’s strategic ambitions to exert influence on the world stage. The impact of these measures will be significantly magnified due to historical multilateral cooperation with a wide range of Allies and partners who are mirroring our actions, inhibiting Putin’s ambition to diversify Russia’s brittle, one-dimensional economy.

Further down, there is this:

Additional full blocking sanctions on Russian elites and their family members: Sergei Ivanov (and his son, Sergei), Andrey Patrushev (and his son Nikolai), Igor Sechin (and his son Ivan), Andrey Puchkov, Yuriy Solviev (and two real estate companies he owns), Galina Ulyutina, and Alexander Vedyakhin. This action includes individuals who have enriched themselves at the expense of the Russian state, and have elevated their family members into some of the highest position of powers in the country. It also includes financial figures who sit atop Russia’s largest financial institutions and are responsible for providing the resources necessary to support Putin’s invasion of Ukraine. This action follows up on yesterday’s action targeting Russian elites and their family members and cuts them off from the U.S. financial system, freezes any assets they hold in the United States and blocks their travel to the United States.

Some commenters have pointed out that there are no sanctions yet on Putin himself. There are also complaints that Biden has not cut Russia off from the SWIFT Banking System, but that’s not something the United States can do by itself. Other nations would have to agree. Reuters reports that the EU nations in particular are unlikely to agree to cut Russia off from SWIFT because it would hurt them as much if not more than Russia. And, anyway, Russia has been building an alternate payment system.

And in addition to sanctions on Russian financial institutions, Belarus is facing penalties for allowing Russian troops to use it as a staging area.

This is good, although it’s not clear to me that this is all that could be done. In a fascinating interview by Greg Sargent of Edward Fishman, a former State Department official, Fishman talks about completely freezing all state-owned banks in Russia out of the global financial system. Some of that has been done, but I don’t know if all banks are affected. And Fishman says that all of the wealth held by the oligarchs outside of Russia must be identified and frozen. I sounds as if some of that is being done, but I can’t tell how much is being done.

Fishman says he believes Putin may be overconfident in his ability to absorb the costs of sanctions. Russia was sanctioned in 2014 and survived. This round of sanctions is going to be much, much harder. Fishman adds, “Substantial agitation among the Russian elite could potentially impact Putin’s calculus. It’s anyone’s guess what the right vector of influence is, but it’s incumbent upon the U.S. to try all of them.”

I trust that President Biden is examining every option very carefully and will put more into effect in the next few days. I think his position overall is correct.

The Right continues to blame Biden for being “weak” and allowing Putin to act up, as if any President could have stopped him. They have no specific ideas about what might be done differently, mind you; they just somehow think nothing bad would happen were Biden not such a noodle.

One strongly suspects that the American Right’s perpetual ridicule of Joe Biden factored in to Putin’s decision to move on Ukraine. Putin could count on much of the U.S. public not rallying around their President, and if that’s what he thought, he would have been right. Here’s a statement released today from Elise Stefanik, the third-ranking Republican in the House.

“After just one year of a weak, feckless, and unfit President of the United States and Commander-in-Chief, the world is less safe. Rather than peace through strength, we are witnessing Joe Biden’s foreign policy of war through weakness. For the past year, our adversaries around the world have been assessing and measuring Joe Biden’s leadership on the world stage, and he has abysmally failed on every metric. From kinetic and deadly attacks on our allies and partners, to the catastrophic withdrawal and surrender in Afghanistan, to the cyber attacks impeding American industry and infrastructure, to today’s Russian invasion of Ukraine, Joe Biden and his Administration have failed America and the world.”

It’s past time to turn this crap back on the Right, which is acting as a fifth column in service to Putin. Yesterday Alexander Vindman compared Tucker Carlson to Tokyo Rose; that’s a start.

But, you know, if the Right all this time had not been fighting the inevitable, and instead had supported robust investment into renewable energy technology these past several years, we wouldn’t be in the fix we’re in now about petroleum prices, would we? Righties want to keep us tied to fossil fuel, and it keeps getting us into trouble because it keeps us dependent on countries controlled by despots, or else it requires risking other resources, such as coastlines, wildlife, air, water, and the entire freaking planet. I guess that petroleum industry money is a resource they just can’t quit.

Jennifer Rubin, who almost seems a different columnist from what she was in the Bush years, writes  Dear media: Ask Republicans why they are normalizing support for Putin. “Most Republicans remain cultishly devoted to defeated former president Donald Trump, even as he openly praises Vladimir Putin for dismembering Ukraine, a democratic ally,” she writes. “Imagine a leader of an American party praising the Soviets as their troops crushed the Hungarian uprising in 1956.”

And meanwhile, in Russia, thousands of Russians took to the streets to protest their nation’s invasion of Ukraine. And thousands were swiftly detained. The Associated Press reports,

In Moscow and other cities, they moved swiftly to crack down on critical voices. Litvinovich was detained outside of her residence shortly after posting the protest call. OVD-Info, a rights group that tracks political arrests, reported that 1,745 people in 54 cities had been detained by Thursday evening, at least 957 of them in Moscow.

Meanwhile, a bunch of mostly white men in big trucks are heading to Washington DC to clog up traffic and otherwise cause trouble because they think they’ve been denied their “freedoms.” Although the trucker convoys are ostensibly about covid restrictions,  “they’re also demanding action on a lot of issues that have nothing to do with COVID-19, ranging from ‘justice’ for January 6 insurrectionist Ashli Babbitt to reversing the renaming of two streets in Scranton in honor of President Joe Biden,” Margaret Hartmann writes at New York magazine.

But the “freedom” activists do love them some Vlad Putin, because he’s a friend of Donald Trump, you know. 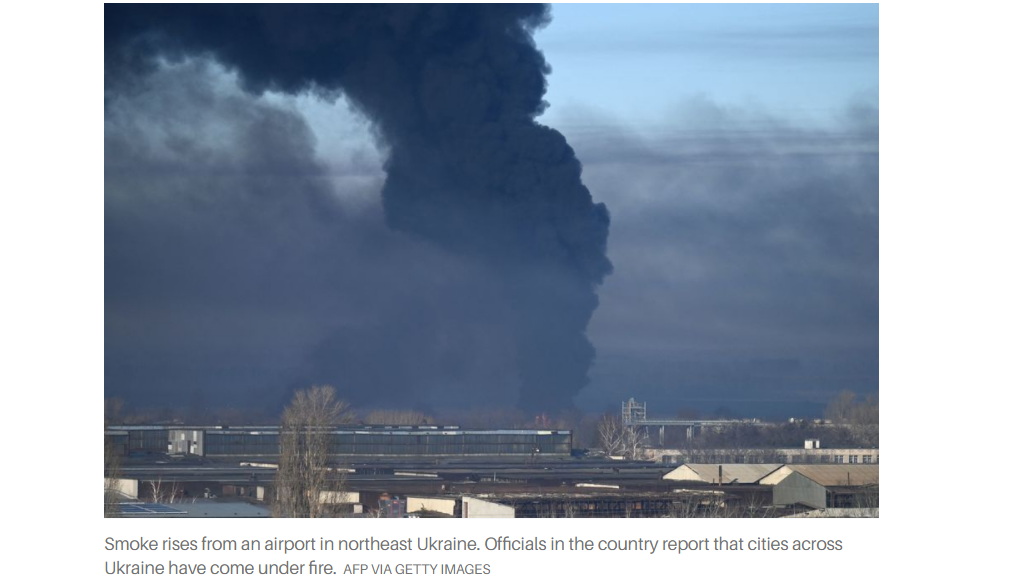