I almost feel guilty about the weather. Where I am, it’s lovely. Bright sunshine, temperatures in the 60s. This is my favorite kind of weather, sunny but not hot. I hope everyone in Florida is getting through the storm okay.

Trump doesn’t want to have to do his homework. Reuters reports,

Lawyers for former President Donald Trump are resisting a federal judge’s instruction to submit a sworn declaration on whether they believe the government’s list of property taken from Trump’s Florida estate is accurate.

According to a letter publicly filed by Trump’s lawyers on Wednesday, the former president’s legal team told Senior U.S. Judge Raymond Dearie, who is reviewing the materials taken in the federal raid of the Florida property, that they don’t believe Dearie has the authority to require them to make such a filing.

I am not a lawyer. But if you’re the one bringing a lawsuit claiming the FBI took things from you that you should get back, and/or that some of the stuff the feds say they took wasn’t really in your house, this doesn’t seem like an outrageous request. Put up or shut up.

The Trump lawyers’ letter, dated Sept. 25, says the order by another federal judge appointing Dearie to conduct the outside review of the materials only requires that the government file a declaration on the accuracy of the inventory list, and not Trump.

Trump’s lawyers also said they could not verify the accuracy of the property list because they do not currently have access to information taken in the raid that was marked as classified.

The Trump lawyers are complaining that the records they are supposed to review make up 200,000 pages of material. That’s a fantasy number they came up with, I believe. That’s plenty to keep them busy without dealing with the classified material that Trump is not ever going to get back, anyway.

The lawyers also are complaining because Dearie wants the review done by October 7. Originally he wanted it done by September 30, but with the delays in producing digital files for everyone to review (since no one would work for Trump) it’s been moved to October 7.

This universe of documents reflects the contents of 27 boxes plus the contents of Trump’s desk drawer (ignoring the 520 pages of potentially privileged documents, some of which came from the desk drawers, and all but one email of which Trump has had for 13 days). If the 200,000 number were accurate, every box and the drawer would have, on average, over 7,000 pages of documents, which is far more than even a large case of paper would include (10 reams of paper at 500 pages each, or 5,000). And some of these boxes include books (33 altogether) and clothing or gifts (19 total), which would fill space really quickly.

But even assuming that someone in government told him that the 27 boxes of documents plus the contents of Trump’s desk drawer amount to 200,000 pages of material, even assuming Trump would need to review every page of every government document he stole, this is still misleading.

See also Mark Sumner at Daily Kos. No way there are 200,000 pages. And I’m guessing that the bulk of the non-classified documents, however many pages there are of them, can be dealt with in a glance. They don’t have to read old New York Times stories all the way through. Trump’s lawyers should shut up and get ready to start glancing.

In other news: The sedition trial of Stewart Rhodes and some other Oath Keepers is about to begin. The defense intends to claim that they believed they’d been ordered to attack the Capitol by Donald Trump.

They intend to tell the jury that when armed teams of Oath Keepers made plans to rush into Washington from Virginia on Jan. 6, 2021, they believed they would be following legal orders from the president himself.

Lawyers for the five defendants are set to argue at the trial — which began on Tuesday with jury selection — that the Oath Keepers were waiting on Jan. 6 for President Donald J. Trump to invoke the Insurrection Act, a Revolutionary-era law that grants the president wide powers to deploy the military to quell unrest in emergencies.

As the trial in Federal District Court in Washington moves forward, lawyers in the case have said, Mr. Rhodes intends to take the stand himself and testify that even though Mr. Trump never did invoke the act, the Oath Keepers believed that he was going to do so. Their preparations for violence on Jan. 6, he will argue, should be thought of as a lawful attempt to help the president, not as an illegal attack against the United States.

This seems lame as a defense. The Oath Keepers are not “the military,” and the Insurrection Act, invoked or not, doesn’t apply to them. But it does seem to throw Trump under the bus. It suggests Trump really did instigate the violence because his followers were doing what they thought he wanted them to do. 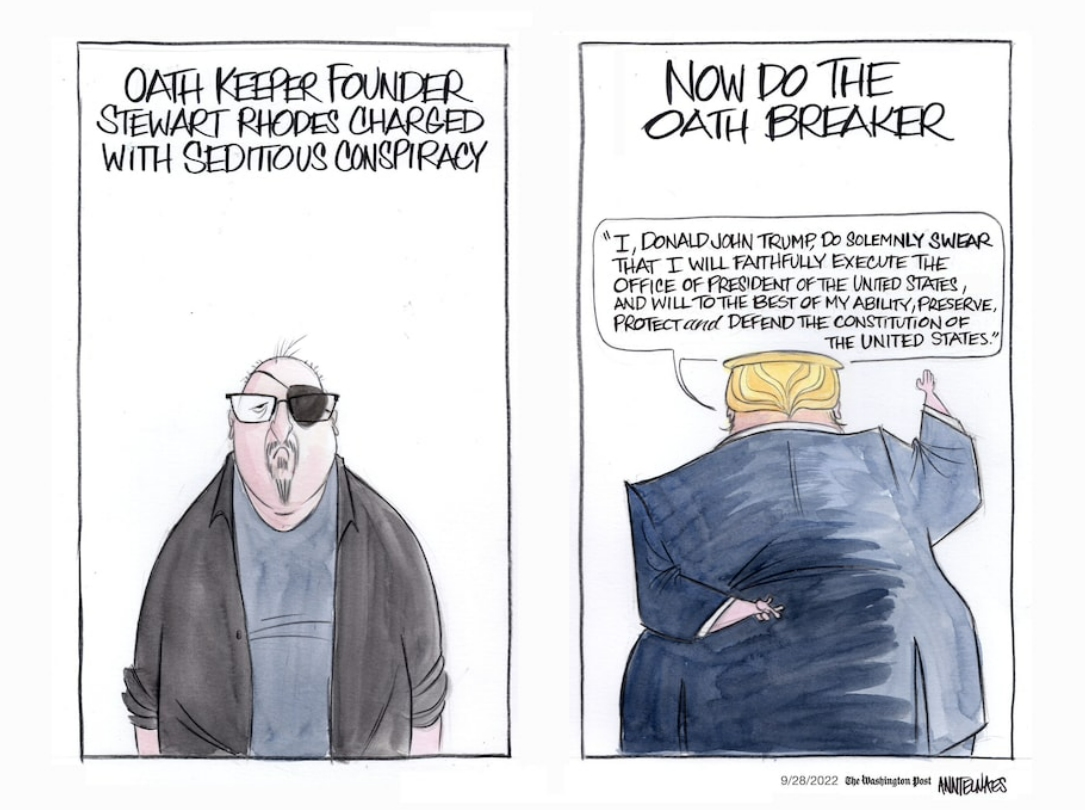