According to Mark Joseph Stern at Slate, law school professors are having apoplexy over the Supreme Court’s recent decisions.

At law schools across the country, thousands of professors of constitutional law are currently facing a court that, in their view, has let the mask of neutrality fall off completely. Six conservative justices are steering the court head-oninto the most controversialdebates of the dayand consistently sidingwith the Republican Party. Increasingly, the conservative majority does not even botherto provide any reasoning for its decisions, exploiting the shadow docket to overhaul the law without a word of explanation. The crisis reached its zenith between September 2021 and June 2022, when the Supreme Court let Texas impose its vigilante abortion ban through the shadow docket, then abolished a 50-year-old right to bodily autonomy by overruling Roe v. Wade. Now law professors are faced with a quandary: How—and why—should you teach law to students while the Supreme Court openly changes the meaning of the Constitution to align with the GOP?

About a month ago I was reading that Republicans in Congress want a new constitutional convention so that the Constitution can be rewritten. This is rich, considering that Republians for years have pretended they revere the Constitution as something like Holy Writ, and they say it’s Democrats who want to violate it. It’s notable that Trump, in his infamous January 6 “fight like hell” rally speech, mentioned the Constitution more than a dozen times. For example:

“What an absolute disgrace that this can be happening to our Constitution.”

“And Mike Pence is going to have to come through for us, and if he doesn’t, that will be a, a sad day for our country because you’re sworn to uphold our Constitution.”

Trump, of course, doesn’t know the Constitution from ketchup, and I doubt many in the crowd could pass a high-school level test on it, either. “Constitution” in this case is more of a mystical invocation of whatever they think “Americanism” is rather than the actual Constitution. The truth is that the Right hates the Constitution as written, because it protects the nation from the kind of thuggish authoritarianism they’d like to impose.

Back to Mark Joseph Stern:

The problem, it’s worth emphasizing, is not that the Supreme Court is issuing decisions with which left-leaning professors disagree. It’s that the court seems to be reaching many of these conclusions in defiance of centuries of standards, rejecting precedent and moderation in favor of aggressive, partisan-tinged motivated reasoning. Plenty of progressive professors have long viewed the court with skepticism, and many professors, right- and left-leaning, have criticized the reasoning behind certain opinions for decades. But it’s only in recent years—with the manipulation of the justice selection process combined with clear, results-oriented cynicism in decisions—that the problem has seemed so acute that they feel it affects their ability to teach constitutional law.

“It’s hard to think about your own profession—the things you were taught, the things you believed in—abruptly coming to an end in rapid succession,” said Tiffany Jeffers, a professor at Georgetown University Law Center. “It’s hard to ask a law professor to dismantle all the training they had. It’s a difficult, emotional, psychological transformation process. It’s not easy to upend your life’s work and not trust the Supreme Court.”

It’s been a while since I quoted Charles Pierce:

Justice Kagan has been speaking publicly but generally about the legitimacy of courts. She’s not naming names or citing specific decisions, but she’s been saying things like this:

“And when they instead stray into places where it looks like they are an extension of the political process or where they are imposing their own personal preferences,” she added.

Roberts and Alito both pushed back. Roberts tried to re-frame the issue as a simple disagreement about the law, but Alito said,

“It goes without saying that everyone is free to express disagreement with our decisions and to criticize our reasoning as they see fit,” Alito, who penned the decision reversing Roe v. Wade last term, told The Wall Street Journal on Tuesday. “But saying or implying that the court is becoming an illegitimate institution or questioning our integrity crosses an important line,” he said.

Alito needs some correcting, I say.

Ruth Marcus warns that the next term could be worse than the past one.

Nothing in the behavior of the court’s emboldened majority suggests any inclination to pull back on the throttle. The Supreme Court is master of its docket, which means that it controls what cases it will hear, subject to the agreement of four justices. Already, with its calendar only partly filled, the justices have once again piled onto their agenda cases that embroil the court in some of the most inflammatory issues confronting the nation — and more are on the way.

Last term, in addition to overruling Roe v. Wade, the conservative majority expanded gun rights, imposed severe new constraints on the power of regulatory agencies and further dismantled the wall of separation between church and state. …

…“They’re impatient,” Harvard Law School professor Richard Lazarus said of the conservative justices, especially the longest-serving, Clarence Thomas and Samuel A. Alito Jr. “They’ve spent a lot of time waiting for this majority to happen, and they don’t plan to waste it.”

If so, that is a perilous course for an institution whose very authority is grounded on the presumption of stability. If the majority insists on its current and hurried path, it risks deepening the very questions about the court’s legitimacy that have tormented the justices — divisions reflected in the bellicosity of their written work and that have erupted, in recent weeks, into their public debate. At a moment of extreme and increasing national division, change of such velocity and breadth is unhealthy not only for the court but also for a nation being asked to abide by its rulings.

See also SCOTUS Threatens the Planet from three months ago.

I know, I know, we are regularly lectured by justices that we are supposed to think of the court as nonpartisan. But that sentiment is belied by the ferociously partisan nature of the court’s recent rulings — and the highly partisan way this conservative majority was created.

It’s also laughable that conservatives, including the ones on the court, should be shocked that their bellicose use of the confirmation process and judicial power should inspire such fury from Democrats. For decades, it was Republicans who ran against liberal courts — and “judicial activism” and judges who “legislate from the bench.” It turned out they were happy to legislate away once they got the votes.

For what it’s worth, Justice Ketanji Brown Jackson disagreed with Gorsuch already. See also The Supreme Court Is On The Verge Of Killing The Voting Rights Act at FiveThirtyEight.  And for a good laugh, see Alexandra Petri.

My hope is that if the Democrats have the majority in Congress next year, they will at least try to increase the number of justices on the court. A message needs to be sent that the Court is not untouchable. 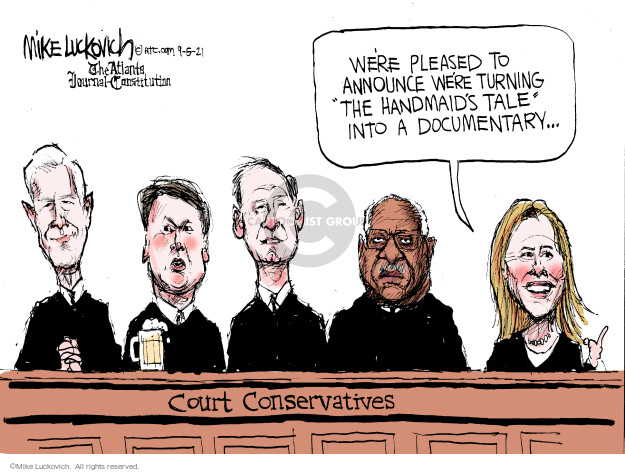 10 thoughts on “An Out of Control Supreme Court”