What is probably the series finale of the J6 Hearings ended with a bang, with the committee members voting to subpoena Trump. He’ll probably wriggle out of it somehow, but it still was clever plot twist.

While the hearings were going on, the Supreme Court dropped an unsigned, one-sentence order that it would not reinstate Judge Loose Cannon’s order that the special master review the classified documents.

In other news, we learned that Trump formed a new company in Delaware, called Trump Organization II. Now New York AG Letitia James is asking a judge to restrict Trump’s business activities while her office sues him for allegedly committing decades worth of fraud. As I understand it, she believes Trump planned to move all his assets to the new company to put them out of her reach.

In more other news, a federal judge has denied a request by former president Donald Trump to pause proceedings in a defamation case against him brought by former Elle magazine columnist E. Jean Carroll. Trump had won a temporary pause from the U.S. Court of Appeals for the 2nd Circuit, which sent the case to the appeals court in D.C. to determine whether Trump was a federal employee as defined by the law when he publicly rebutted Carroll’s story that he had raped her years ago. Trump is scheduled to be deposed in a few days, and it looks like he can’t get out of that.

All this stuff has happened within the past 24 hours. Headline at Alternet: ‘Furious’ Donald Trump ‘raging the last few days’ as legal woes pile up.

Donald Trump is “furious” and has been “raging the last few days” over three of the numerous legal cases he is facing.

According to The New York Times’ Maggie Haberman, the former president’s rage is over the U.S. Dept. of Justice’s classified documents case, the defamation case against him by journalist E. Jean Carroll who alleges he raped her, and a so-called “pyramid scheme” which he and some of his family members were involved in. He is being sued for fraud in that case, and was forced to give a deposition in it last week.

Here’s a link to a story about the pyramid scheme.

On Wednesday a federal judge said Trump should not be allowed to delay the E. Jean Carroll defamation case and ordered him to give a deposition next week, refusing his request for a delay.

“Trump put out a statement yesterday excoriating E. Jean Carroll, who is suing him for defamation after she accused him of rape decades earlier.” … In his rant Wednesday night some legal experts say he established further evidence for Carroll’s defamation case. He had argued his comments were protected because he made them while being president. While that argument is in question, he now is no longer president.

J6 Hearing today! I’m planning to spend the afternoon watching the teevee. Please do add any comments about the hearings to this post.

While Alex Jones was setting new standards for being an asshole, a Connecticut jury awarded some Sandy Hook parents nearly a billion dollars. And that’s just compensatory damages; I understand there may be more punitive damages. Jones’s previous penalty was from a court in Texas. Texas tort laws have been written to protect defendants and make it hard for the damaged plaintiff to get relief. This includes very strict limits on awarded damages, so whatever Jones was penalized in Texas will be whittled down considerably. But that’s Texas. Connecticut is different. The bobbleheads on MSNBC last night doubted an appeals court would lower the penalty, especially given Jones’s behavior through the trials. Jones might possibly get some accommodation in bankruptcy court someday, it says here, but we’ll see. It’s likely Jones will spend the rest of his sorry-ass life getting money wrung out of him by those Connecticut plaintiffs.

And yesterday we learned the feds have hard evidence — surveillance videos and witness testimony — that Trump had a lot of the stolen government documents he was hoarding moved after he’d been subpoenaed. This is obstruction on its face. See Aaron Blake, Trump’s fast-growing obstruction of justice problem, and Quinta Jurecic at Lawfare, Trump’s Obstruction of Justice, From Mueller to Now. 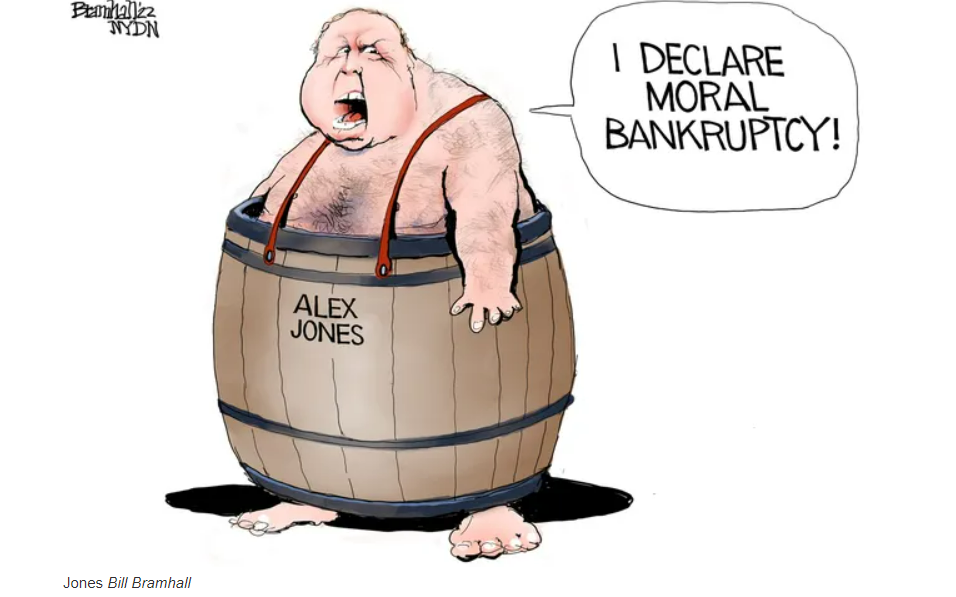