The Stewart Rhodes insurrection case went to the jury yesterday. Maybe we’ll get a verdict before Thanksgiving.

For an interesting read on what’s being called “salad bar terrorism,” see Composite Violent Extremism: A Radicalization Pattern Changing the Face of Terrorism by a bunch of people at Lawfare Blog. This is about an increasing phenomenon of mass shooters and others committing violent acts who don’t fit into pre-existing ideological categories.

In recent congressional testimony, for example, FBI Director Christopher Wray described extremists who hold a “weird hodgepodge blend of ideologies,” noting that this trend is producing challenges in “trying to unpack what are often sort of incoherent belief systems, combined with kind of personal grievances.” Other government officials and private-sector researchers have used a variety of different terms to discuss the same phenomenon, including ideological mixing and ideology à la carte. 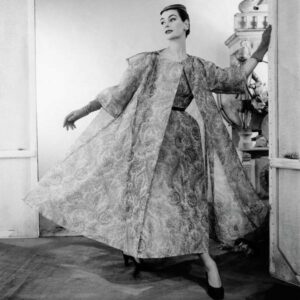 What the fashionable Balenciaga Leftie was wearing in 1954. You can tell she’s a Communist getting ready to infiltrate something.

Speaking of ideological confusion, yesterday a guy at the Right-Wing site Hot Air wrote a post headlined Kids and Bondage that began, “The Left gets creepier by the minute. And that is saying something.” It was about some advertising featuring children in sexualized poses from the luxury fashion house Balenciaga. Since when is Balenciaga  “the Left”? Oh, it’s explained late in the post — the NAACP commended Balenciaga for leaving Twitter. That’s the connection.

Well, obviously, this is solid proof that Hillary Clinton up to something. Maybe Anthony Fauci also. They’ll find the truth on Hunter Biden’s laptop.

The new leak allegations aimed at Justice Samuel Alito are showing us how very wealthy right-wing people get access to Supreme Court justices. Through money, of course. The money isn’t going into the justice’s personal pockets, but it still stinks. See The Real Problem With the Second Alleged Leak at the Court by Dahlia Lithwick at Slate.

Update: The Supreme Court has decided the House can get Trump’s tax returns. Of course, now there is some question about whether they can get the returns before the Republicans take over.

If the House Dems can get the returns before the term is up, they should be sure Democratic senators get copies. They should send a copy to Susanne Craig at the New York Times. Hell, I’d make PDFs and put them all online.

Also, this happened today at the 11th Circuit Court of Appeals. This is from Law & Crime:

In the first courtroom match-up for newly anointed special counsel Jack Smith, the Department of Justice urged a conservative panel of the 11th Circuit Court of Appeals to void the privilege review stopping them from using certain files seized from Mar-a-Lago in their investigation against former President Donald Trump.

“Delay is fatal to the vindication of criminal law,” Justice Department attorney Sopan Joshi, on loan from the solicitor general’s office, declared on Tuesday afternoon.

From the general tenor of the roughly 40-minute hearing, that warning resonated: A three-judge panel of all Republican appointees from the conservative 11th Circuit Court of Appeals suggested that a lower court judge may not have had equitable jurisdiction over the case and appeared deeply concerned about the precedent finding in Trump’s favor would set for any subject or target of a criminal investigation.

Time and again throughout oral arguments, Trump’s attorney James Trusty faced sharp questioning from the three-judge panel, even over referring to the search of Mar-a-Lago as a “raid.”

“Do you think that ‘raid” is the right term for execution of a a warrant?” U.S. Circuit Judge Elizabeth “Britt” Cagle Grant, a Trump appointee, asked.

Trusty apologized for using loaded terminology, only to earn another rebuke later for referring to the document authorizing it as a “general warrant.”

“You didn’t establish that it was a general warrant,” Pryor countered.

The exchanges encapsulated the rough reception Trump’s legal team has had in the 11th Circuit since the Justice Department’s appeal began.

6 thoughts on “Fashion News and Other Leftist Plots (Updates)”