My “congressman,” Jason Smith, was not one of the 20 or so nutjobs who held out against Kevin McCarthy in the speaker vote debacle. Smith was a pro-McCarthy nutjob. Yet he somehow got the chair of the Ways and Means Committee. I can promise you that no good will come of that, unless it’s to utterly bleep up the House Republicans somehow.

For example, Semafor is reporting that McCarthy may have promised the House nutjob fringe that he would allow the House to vote on a “fair tax” proposal, which I believe is the kind of thing that would have to go through Ways and Means.

As part of his deal to become House speaker, Kevin McCarthy reportedly promised his party’s conservative hardliners a vote on legislation that would scrap the entire American tax code and replace it with a jumbo-sized national sales tax. …

…The idea of a “fair tax” that would replace our current IRS code with a single sales tax was popularized on conservative talk radio in the late 1990s. It has kicked around Washington ever since, popping up in the occasional presidential platform, but never received a vote.

Its current champion in Congress is Georgia Rep. Earl “Buddy” Carter, whose Fair Tax Act would swap out the income, payroll, estate, and corporate levies for a 30% national sales tax. It would also send out “prebate” checks to soften the blow on lower income families, all while abolishing the Internal Revenue Service.

If people don’t like inflation, how are they going to feel about a 30 percent sales tax? I can’t imagine this has a serious chance of passing in the House, since I’m sure there are at least some Republicans who realize that this would not be a popular thing if it went into effect. And it wouldn’t have a chance in the Senate. Still, just the fact that some of the House nutjobs take this nonsense seriously says something. Where Jason Smith stands on this issue, I do not know. Smith does want to privatize Social Security, so he can’t be counted on to support anything sensible.

But one thing I do know, is that Rep. Vern Buchanan of Florida is really pissed at McCarthy now.

As I wrote last week, Republicans have been fixated on whether 71-year-old Rep. Vern Buchanan might retire from Congress after losing the House Ways & Means chairmanship to the 42-year-old Speaker’s pet Jason Smith, potentially reducing Kevin McCarthy’s margin of error from four votes to three to pass critical partisan legislation. (If McCarthy somehow loses fabulist George Santos, too, he could be held hostage by as few as two members of his already fractious House conference.) Vern’s people say he won’t retire (despite the rumblings on the Hill), but they didn’t deny that he was mighty pissed to be passed over as the most senior person on the Ways & Means committee by Smith, a member who was fifth in line.

Just how angry was he? Well, a source on the House floor during the vote told me that while McCarthy was gaveling down the votes, Buchanan walked up to McCarthy and said, “You fucked me, I know it was you, you whipped against me.” He then proceeded to chew out McCarthy’s deputy chief of staff for floor operations, John Leganski. It was shocking to see such fury from Buchanan, who’s known for being mild mannered. Indeed, I heard that the tirade was so heated that the Speaker’s security detail stepped in with a light touch. (McCarthy’s spokesperson Matt Sparks disputed this detail saying, “at no point did anyone have to step in.” A spokesperson for Buchanan declined to comment.)

McCarthy got the speaker’s gavel, but how long will he be allowed to keep it?

Note also that Marjorie Taylor Green, Paul Gosar, and Lauren Boebert are now all on the Oversight Committee. James Comer, who is eager to investigate President Biden on the documents issue but thinks Trump has earned a pass, is chair. I suspect the new Oversight Committee will be looking a lot like the old House Un-American Activities Committee in no time.

In other news, Greg Sargent writes that Biden just outmaneuvered MAGA Republicans — and they barely noticed.

This is a big move by the administration, one long sought by immigration advocates. Biden’s immigration record is decidedly mixed, but this would address a serious problem: Undocumented migrant workers often fear reporting workplace violations — ones they were victims of or just witnessed — because it could lead to their deportation.

Now they will have improved access to a legal process that can defer their deportations for two years and potentially extend them work permits. The hope: To encourage them not just to report unsafe or exploitative working conditions, but also to cooperate with ongoing Labor Department investigations, improving working standards for all workers.

So far, Sargent continues, the anti-immigrant Right hasn’t paid much notice to this policy change. To come out against it they’d have to come out in support of predatory employers. Well, they’ve done worse.

See also Josh Marshall, Trump’s Disappearing, and He Knows It. 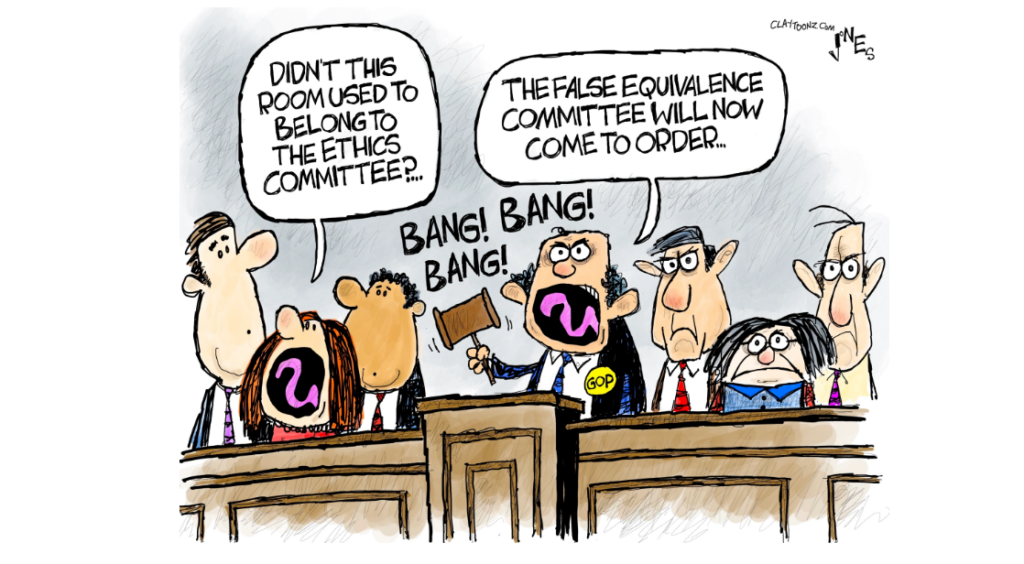 3 thoughts on “Endless Insanity in the New GOP House”