Recent events have reminded me that our culture has strict rules about who gets to be angry.

There are social psychology papers going back many years showing us that men get to be angry when women do not. Here’s a news story about just one:

Citing earlier research, Uhlmann and Brescoll show that for reasons including deeply entrenched stereotypes, there is a real difference between men and women when it comes to expressing anger. Indeed, studies have established that men who express anger at work sometimes benefit from doing so, as co-workers subsequently perceive the mas more important, powerful, and independent. However, when women lose their cool, they do not benefit from such positive consequences

“People … view a man’s anger as a response to objective, external circumstances, but a woman’s  anger as a product of her personality,” say Uhlmann and Brescoll. “As a result, a professional woman’s anger may imply that she is not competent at dealing with workplace situations.”

This is also a bind for women in politics, of course. Awhile back Hillary Clinton was accused by Republicans of being “too angry” to be President (to which David Letterman said, “Did you hear what the Republicans have said about Hillary Clinton? They say she’s too angry to be president. Hillary Clinton, Senator Hillary Clinton, too angry to be president. When she heard this, Hillary said, ‘Oh yeah? I’ll rip your throats out, you bastards.'”) This is right up there with the complaint that she’s “ambitious.” Ambition is fine and noble in a man, but highly suspect in a woman. But the point is, all other things being equal, it’s okay for men to be angry, but when a woman is angry something must be wrong with her. The stereotype that women are “more emotional” has no basis in observable fact, but persists even in people who ought to know better.

I said “all other things being equal,” and those “all other things” are race, of course. All kinds of social psychology papers have been written about how anger is perceived in whites and blacks. Whites see anger in blacks as “threatening,” more so than anger observed in other whites. I googled “black anger” and got a lot of commentaries complaining that blacks are angry and scary. They shouldn’t be so angry. They should try anger management.

The stereotype of the angry black is so entrenched in white America that the Right seizes on any demonstration of emotion in our President and First Lady as proof of it. Michelle Obama cannot demonstrate even the mildest of pique in public without right-wing media going ballistic over the “proof” that she’s militant and angry. Barack Obama can no doubt credit his political success to his extraordinary discipline in not showing anger in public, because just one outburst would have ended his career. Even so, Mitt Romney tried to paint the President as an “angry black man.” Hey, he’s black; he’s gotta be angry. Right? See especially Ta-Nehisi Coates, “Fear of a Black President.”

The Key and Peele “anger translator” skits are partly spoofs of the President and partly spoofs of the culture that forces him into no-anger-allowed box. Hilariously, the “skit” performed at the White House Correspondent’s Dinner drew out the bigots like honey draws ants; see, for example, John Hinderaker  and Byron York, two men so soaked in racism they can’t see the joke has been on them, all along.

It hasn’t been that long since “angry white men” were being touted as a powerful voting block. Remember the angry teabaggers who kept showing up at townhall meetings to yell about the Affordable Care Act? (And yes, these included some women; I propose the maha anger-gender corollary, that it’s okay for a woman to be angry when she’s standing next to a man angry about the same thing.)

And then there are our frequent mass shootings, nearly always perpetrated by white men. When a white man acts out violently, his actions are attributed to “mental illness” or other factors unique to him as an individual. Anyone else doing the same thing would be proof that his entire demographic group, whatever that is, is unhinged. However, people looking closely at the several White Male Perpetrators say that one thing they have in common is a sense of “aggrieved entitlement” that really is linked to their race and gender and how those factors are perceived in our culture (which is not to say that all white men are “angry”).

As with men in the workplace, anger in a white man often is perceived a virtue or strength, not a threat. Remember Carl Paladino? He was the angry white guy who won the New York Republican gubernatorial primary in 2010. He didn’t come close to beating Andrew Cuomo, but no Republican is going to win a statewide general election in New York. The thing with Paladino is that his entire sales pitch was that he was angry. That’s what got his primary win — he was angry.

But then, back during the Bushie years the Right was always complaining about the angry left. Here’s a couple of old blog posts about that — “Speaking of Anger” and “Our Left Wing.” Here’s a snip from the latter:

Predictable reaction from rightie blogs: We’re cool and intellectual, and those lefties are unhinged. I was checking out reactions on one rightie blog, where I found this comment:

“I don’t recall there being a vocal Right that was calling for the public lynching of President Clinton.”

Sorta takes your breath away, doesn’t it? I couldn’t read any further. Enough of that.

And now we come to Baltimore. All sorts of people are clucking about the violence, and I don’t condone violence, either. But as I wrote yesterday, something’s out of whack when citizens are told to control themselves while the government is allowed to be as violent as it wishes, with little to no accountability.

White “patriots” who want to secede or who are hankerin’ for an armed confrontation with the feds out at the Bundy Ranch = acceptable.  Tempers boiling over because of actual injustice = unacceptable.

Basically, the degree to which one is allowed to be angry, and at what, depends on how much power you have. The powerful can be as angry as they like, without criticism. But when those with less power are angry, they are condemned for it. 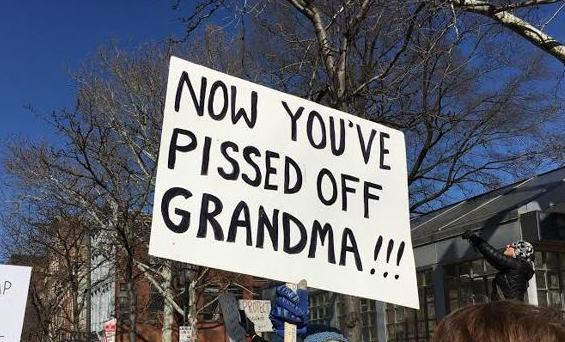 7 thoughts on “Who Gets to Be Angry”