I hope everyone enjoyed Father’s Day. I was kind of out of it yesterday and didn’t pull myself together to post anything. But now I’m back.

“Fake news” is a vast topic, but I want to zero in on something I see going on among leftie websites and social media. AnÂ Atlantic article from February discussed the increasing tendency of online lefties toÂ share â€œfake news,â€ defined as “online stories that look like real journalism but are full of fables and falsehoods.” Some days social media is one link to a fake news story after another.

As the Atlantic article says, fake news on the Left and Right are not equivalent. Leftie fake news usually is not deliberate propaganda. Usually it exploits wishful thinking. It’s a headline blurting out something we may want to be true, so people can’t resist clicking on it. The story itself may not deliver what the headline promises, however.

For example, a story being spread around today is headlined “Donald Trump wants to resign.” If you read the actual article, you find a lot of filler copy that finally gets to a quote pulled out of Politico —

â€œBut Trump, too, is cognizant of the comparison to Nixon, according to one adviser. The president, who friends said does not enjoy living in Washington and is strained by the demanding hours of the job, is motivated to carry on because he â€˜doesnâ€™t want to go down in history as a guy who tried and failed,â€™ said the adviser. â€˜He doesnâ€™t want to be the second president in history to resign.’â€

That’s it. That’s the entire “scoop,” and it’s neither original nor does it actually say that Donald Trump wants to resign. It says he’s miserable at the job, yes, but that he doesn’t want to resign. This example is mostly innocuous, but going by social media comments the headline caused a lot of people to believe Trump is about to resign.

This is right up there with last year’s number one fake news story on the Left, that Hillary Clinton was about to be indicted. Any day now. Just you wait and see. Any day now …

Sometimes there’s a headline with no story — see “Donald Trump Is Going to Prison.” There’s no story; just the author’s prediction. This kind of story comes closer to being a hoax than propaganda, but the point of it is to get people to click on the link and thereby earn the site owners advertising revenue.

The people who write these sites (such as Bill Palmer of Palmer Report, who also happens to be a jerk, IMO) are not “journalists” even in a broad sense of the word. They do no legwork, make no phone calls, cultivate no sources. They pull out pieces of news stories published in legitimate news sources, wrap them in a lot of extra verbiage to plump them and make them look more substantial, slap an incendiary headline on them, and hit publish. Then they wait for the clicks to come in.

Sometimes these fantasies are unintentionally hilarious. Louise Mensch and Claude Taylor of Patribotics came up with this one last month:

Multiple sources close to the intelligence, justice and law enforcement communities say that the House Judiciary Committee is considering Articles of Impeachment against the President of the United States.

Sources further say that the Supreme Court notified Mr. Trump that the formal process of a case of impeachment against him was begun, before he departed the country on Air Force One. The notification was given, as part of the formal process of the matter, in order that Mr. Trump knew he was not able to use his powers of pardon against other suspects in Trump-Russia cases. Sources have confirmed that the Marshal of the Supreme Court spoke to Mr. Trump.

It was reported this week that Mr. Trump had texted Lt. Gen. Mike Flynn the message â€˜Stay strongâ€™. This might be interpreted as an attempt to intimidate a witness, sources say.

The authors have previously reported exclusively on Patribotics that a sealed indictment exists against Donald Trump.

And, of course, that’s now how this works. That’s not how any of this works. Give David Frum credit for a sense of humor:

Exclusive photo of the Marshall of the Supreme Court and his honor guard arriving at the White House. MUST CREDIT. pic.twitter.com/gX4v1hlGoY

ah, another hot scoop rooted in finely granular knowledge of how the U.S. government does not operate pic.twitter.com/1hO3bAARSc

Probably not remarkably, this episode appears to have done nothing to hurt Louise Mensch’s credibility with her fans, who insist she is always right.

I guarantee you can bleeping make up something absolutely ridiculous out of whole cloth, write about eight paragraphs of mostly filler text that doesn’t actually say anything, and with the right headline it will go viral in hours. Here are some headlines you can use — “Trump Spends Three Hours a Day Diddling Himself, Sources Say.” How about “Secret Court Declares Hillary Clinton Election Winner.” (or) “Hillary Clinton Sues DNC to Force Her Name on 2020 Ballot.” Take your pick on that. “Bernie Sanders Working With Trump to Undermine Democrats.” I believe I’ve seen that one, actually.

One area where there is genuine propaganda going on is in the Russian hacking story. As I wrote a few days ago,Â  I keep running into lefties who sincerely believe this whole Trump-Russia thing is just something like a false flag operation being run by Clinton supporters in media and government. And you can find all kinds of “news” stories providing, um, alternative facts supporting that position.

Basically, wherever there’s a strongly held opinion, someone somewhere will set up a fake news site to cater to it. These days a professional-looking news site can be set up for practically nothing. It’s a fairly simple, and completely legal, way to make some money. I wish I were unethical enough to do it myself. 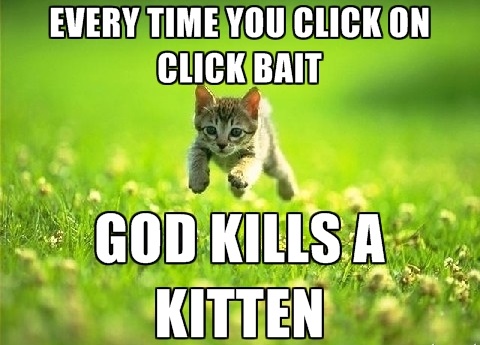 But beside misinforming people, fake news sites also are parasites. They rip off work done by actual reporters and leech revenue that should go to organizations paying the salaries of actual reporters.

And yes, as a blogger I rip off a lot of work done by others, too, but I don’t pretend The Mahablog is a news site. If I ever stumble across an actual scoop I’ll let you know, though.

Early this week, Time Inc. laid off 300 employees across its properties. On Wednesday,Â Huffpost laid off 39 employees. Then later that day Vocativ, another digital media site, laid off its entire editorial staff.Â Huffpostâ€™s layoffs were part of a much larger retrenchment (2,100 layoffs) at Oath, the new company which combines what used to be Yahoo and AOL.

That’s just this week. If the quality of journalism is suffering, part of the reason is that the news business model is in a state of flux these days. Newspapers, once the backbone of journalism, are going the way of the horse and buggy. Over the past several years all manner of news bureaus have had to cut staff. Television news appears to be holding steady, but much of television news is less news reporting and more opinion programming, which is a lot cheaper to produce. Years ago cable news filled up with programs featuring party hacks yelling at each other. Actual in-depth journalism is a rare thing.

So I’d like to ask people to be more careful about who you link to. If you find a story with a promising headline, pay attention to the website it’s hosted in. Have I heard of this site? How can I tell if it’s legitimate?

If it seems to be a newspaper, is it a real newspaper? Fake newspapers abound on the web. Â One way to check is to find out what city it’s published in; a real newspaper will be mostly local news, so the location should be immediately obvious. Â If the location isn’t obvious, assume it’s fake.

Is it The OnionÂ (not fake, but satire)? Is it Jared Kushner’s Observer (Kushner uses it to troll lefties)?

If you aren’t sure about the source, can you corroborate the basic story by finding it in other sources? If it’s real news, multiple sites will pick it up the same story pretty quickly. If the story appears no where else, assume it’s fake.

If the story is just quoting another news source, do the world a favor and link to the original news source. Let the news medium that actually did the legwork get the clicks. Don’t let the parasites win.

Does the writing seem to take a while to get to the point? That’s usually fake news; real journalists put the meat of the story in the first sentence or two.

That said, an online news source isn’t necessarily “fake” if it publishes perspectives different from yours. If you refuse to use news media that do not perfectly reflect your views, that’s another kind of problem, and a serious one. But it’s your problem.

7 thoughts on “Fables and Falsehoods: When Lefties Fall for Fake News”