Of the several untrue things John Kelly said yesterday, I want to comment on this one:

“When I was a kid growing up, a lot of things were sacred in our country,” he said. “Women were sacred and looked upon with great honor. That’s obviously not the case anymore, as we see from recent cases.” 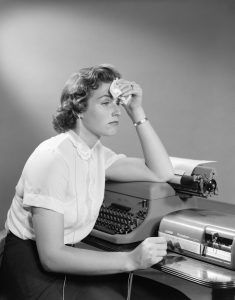 If he’s referring to the Harvey Weinstein case, there’s something he apparently didn’t know. And it’s this: Back when Kelly was a kid growing up, sexual harassment was worse. It was more open. It was more accepted. It was completely legal. Women had absolutely no recourse but to put up with it.

I know what the world was like when John Kelly grew up, because he’s only a year older than I am. So I can speak with at least as much authority. Although assault was as taboo then as now, sexual harassment was the norm back in the day. A woman working with men had to put up with being perpetually objectified and belittled. It didn’t just go on behind closed doors. Men who didn’t participate would sit passively by while other men did, in full view.

Women did not even have a term with which to describe the experience of sexual harassment until 1976. This lack of a term made it difficult to discuss the subject, which prevented the development of a generalized, shared and social definition of the phenomenon. However the lack of a term should not be equated with the nonexistence of the event. In fact, silence is often a reflection of terrible pain and degradation. Like rape and domestic violence, it was a problem which male society swept under the rug, treating it as something simultaneously rare and shameful to the victim. Writing in an article originally published in 1979, Gloria Steinem noted that what now was called “sexual harassment” had just been called “life” only a few years earlier.

Labeling sexual harassment as being “just a part of life” effectively told women that this sort of thing was normal, even a compliment, and that it was their responsibility to cope with it and not complain. Therefore many women of the 1960’s and early 70’s believed that their feelings of shame and injury were evidence of something wrong with them rather than the behavior they endured. This effect only increased when people responded to women’s complaints by telling them, “you asked for it.” This told women that they must really want and enjoy those unwanted attentions, which increased their feelings of guilt and alienation.

But it was going on before the 1960s. The post World War II years saw widespread denigration of women, as Betty Friedan documented in The Feminine Mystique (1964). For example, in the 1950s and 1960s we were the primary butts of stand up comedy (women drivers! mothers in law! stupid housewives!). This was a form of cultural aggression aimed at an entire gender. Yeah, that’s how sacred we were.

I’ve probably told this one before, but as recently as the 1970s I remember the publisher I worked for was bringing out a book of jokes for after dinner speakers. Some of the jokes were blatantly sexist, such as about wife beating. Yes, wife beating was considered funny. I cut out those jokes. The author was furious and went over my head to my supervisor. However, the department head was also a woman, and the jokes stayed out.

So, it wasn’t until John Kelly was very much an adult that sexual harassment was identified as a bad thing, and it was identified as something that shouldn’t be happening in the workplace. However, it still happened. All the time. Just less blatantly.

And, of course, back in the day we were so “sacred” we couldn’t get credit cards in our own name, and any job with a decent wage attached to it could be found in the classifieds in a column headed “Jobs for White Men.” I remember that, too. If that was “sacred,” John Kelly can have it.

16 thoughts on “Oh, and John Kelly Is an Idiot”