A little over three years ago I formulated the Anger Theorem, which is: The degree to which one is allowed to be angry, and at what, depends on how much power you have. The powerful can be as angry as they like, without criticism. But when those with less power are angry, they are condemned for it.

In the first “Who Gets to Be Angry” post I pointed out that right-wing white men are the only demographic in the U.S. allowed to display anger without social or cultural penalty. Right-wing white women are allowed to display anger if they are standing next to a white man who is angry about the same thing — call it ladies’ auxiliary anger. Otherwise, women who display anger are labeled “hysterical” or “whacky,” whereas a white man doing the same thing is “strong.” Men who are not white must also take care to be gentle of temperament, because right-wing white men have a pathological fear of black men displaying so much as mild pique. Or wearing hoodies.

Even white men can be slammed for anger if they are also “liberal” or “lefties,” although younger white guys generally aren’t used to being sensitive to the privilege rules and don’t hold back expressing themselves in angry ways. If there’s a big leftie demonstration, if somebody acts up and behaves badly it’s nearly always a young white guy.

Watch out for people who are enforcers of the anger rule, especially if they are on “your” side, because They Do Not Get It. Nancy Pelosi’s recent rebuke of Maxine Waters is an example. Rep. Waters didn’t call for violence; she called for confrontations. But she got slammed by Democratic leadership, including by Chuck Schumer.

Rep. Maxine Waters (D-Calif.) said Sunday she was surprised to see Senate Minority Leader Charles Schumer (D-N.Y.) criticize her for advocating publicly confronting Trump Cabinet officials, but noted that political leaders “will do anything that they think is necessary to protect their leadership.”

“You know, I was surprised that Chuck Schumer, you know, reached into the other house to do that,” Waters said when asked by MSNBC host Joy Reid if she was surprised to see leaders in her own party criticizing her. “I’ve not quite seen that done before. But one of the things I recognize, being an elected official, is in the final analysis, you know, leadership will do anything that they think is necessary to protect their leadership.”

Yeah, Chuck, let’s not have a black woman’s back or anything. Gotta maintain that ol’ privilege.

So, white men (plus members of the ladies auxiliary) get to walk around with big guns, and that’s fine; if nonwhite men did exactly the same thing the Authorities would be calling out the National Guard to put them down. Well, you know how it all works. 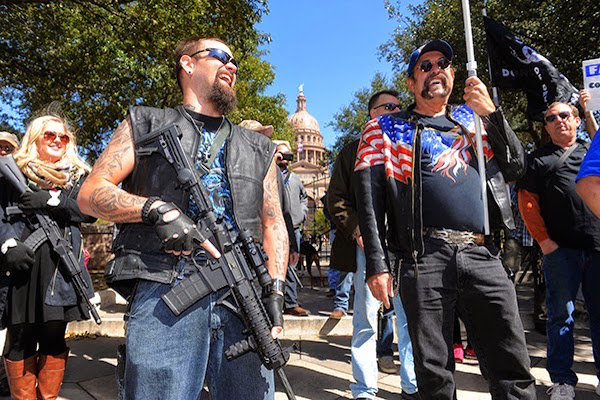 Rep. Water’s calls for confrontation have been blown up by the Right as calls for physical violence. The Right, known for lacking a gene that enables appreciation of irony or hypocrisy, responded with death threats to Waters. And Chuck and Nandy throw her under the bus. Grand.

And then this happened:

President Trump on Sunday blamed his opponents for the division in the country, warning that those who have spoken out against him should “take it easy.”

Trump appeared on Fox News’s “Sunday Morning Futures,” where he was asked about recent incidents in which celebrities cursed him out and protesters demonstrated against members of his administration in restaurants and public spaces.

“I hope the other side realizes that they better just take it easy,” Trump said.

Translation, in the minds of wingnuts: It’s okay to shoot liberals (and racial minorities) on sight.

Trump is exhausting our mental capacity for indignation. This does not help Trump in the eyes of most Americans, to be sure. The Resistance remains strong and will likely have an impressive showing in the November elections.

But, along the margins, where both support for Trump and objections to him are soft, his tactics may have greater impact.

Not to mention the fact that those tactics keep his base riled and ready. Trump is like a drug dealer who has addicted his followers to fear and rage and keeps supplying it in constant doses. His supporters have become rage-junkies for whom he can do no wrong.

Anger doesn’t appease anger. Anger doesn’t do anything constructive, frankly. But we’re past the point that there’s anything to be gained by tip-toeing around right-wing anger to not set it off. They’re angry that we can breathe.

40 thoughts on “Who Gets to Be Angry II”