David Atkins writes at Washington Monthly that “how will you pay for it?” is the new “but her emails.” He writes,

…an enormous amount of the media debate in the 2020 election will focus on how the Democratic nominee intends to pay for priorities like healthcare and climate change mitigation. Even as the Republicans blow ever-bigger holes in the national budget without the slightest concern for how they will be paid for.

This underscores the common but utterly wrong belief that a “conservative” Republican administration will not go as crazy with spending as happens with those profligate Democrats. But, of course, “spending” isn’t the only issue with the federal budget; there’s also “receipts,” meaning taxes, which Republicans keep cutting. 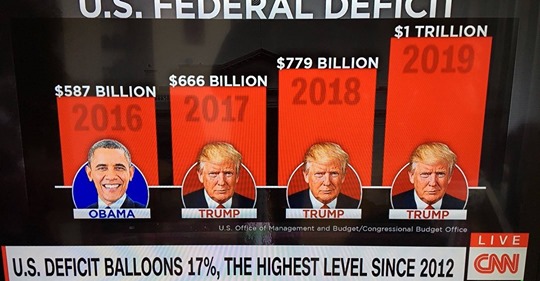 And there’s the matter of what the spending is spent on.

Meanwhile, Trump and the GOP have blown open a nearly $1 trillion dollar deficit hole, a 26% increase from 2018 despite benefiting from an economy that is running at full tilt by traditional metrics. They’ve done this mostly through a combination of giant tax cuts for corporations and the wealthy, as well as through huge increases to the military budget and handouts to make up for Trump’s self-inflicted trade war.

None of this Republican spending was paid for, any more than the Reagan tax cuts were, or the Bush tax cuts, or the invasion of Iraq, or any of the other federal largesse Republicans have doled out over the decades to wealthy corporations, shareholders, military contractors, fossil fuel interests and industries disproportionately benefiting their rural/exurban white male base. …

… It seems that only Democrats actually have to figure out how to pay for budget priorities. Money spent on warfare abroad and obscenely wealthy interests at home requires no sacrifice or justification, but every cent spent on the basic dignity and welfare of the majority of the citizenry must be balanced and accounted for. No political system can function fairly when only one side is forced to pay for its priorities. Yet the notion that Democrats alone must shoulder this burden is such a deeply ingrained conventional wisdom in America that when newer progressives like Alexandria Ocasio-Cortez recently began to challenge it, it came as a shock to the entire discourse.

The “how will you pay for it” question gets applied to all manner of progressive proposals, such as free college education and the Green New Deal. But it’s especially outrageous when applied to Medicare for All or any other plan for universal health care, because the fact of the matter is we’re already spending enough, as taxpayers and individuals, to give everybody in the nation excellent health care. We’re not getting what we’re already paying for. We’re getting ripped off.

In 2019, the average price of health insurance rose above $20,000 for families that obtain their coverage through work. That’s according to the latest survey of employer benefits from the Kaiser Family Foundation, which found that premiums increased by 5 percent for the second year in a row.

Much of that cost was invisible to workers, who only paid $6,015 directly toward their own premiums on average (up 8 percent from the year before). Employers footed the rest.

These numbers are grotesque. Insuring a single family for a year costs almost as much as a Honda Civic. This fact should be a subject of daily outrage, and it probably would be if more workers realized just how much of their compensation is devoured by the cost of health care. After all, every dollar a company pays to Aetna or Cigna is a dollar it might otherwise be able spend on salaries and wages.

And yet, I don’t think these stats alone quite capture the full absurdity of the situation we now find ourselves in. Thanks to the escalating costs of employer-based health insurance, Americans are already paying enough to fund a European-style welfare state. Instead, we’ve settled for a system where, if you’re not careful, the emergency room might charge you $629 for a Band-Aid.

The $629 Band-Aid story came from the experience of nervous, first-time parents who took a toddler with a cut on her finger to the emergency room. The child required a swipe of antiseptic and a band-aid. The bill came to $629. But the hospital wasn’t exactly price-gouging for fun. The cost of keeping an ER open 24/7 is largely underwritten by grotesque overcharges on bills, most of which are paid by insurance companies. And so the cost of insurance goes up to cover the overcharges.

People who complain that they don’t want to pay for other people’s health care need to understand they are already doing so. It’s just a matter of how.

From WaPo, a few days ago:

The topic of Medicare-for-all was front and center — again — during Tuesday night’s Democratic presidential debate. Moderators were particularly interested in how its supporters, like Sen. Elizabeth Warren (D-Mass.), would pay for it. Specifically, would it require raising taxes on the middle class?

To some economists, the question is moot: Americans already pay a massive “tax” to fund health care, they say. It just happens to go to private insurance companies, rather than the federal government.

And, of course, the private insurance companies have to make a profit, which they often do by denying care, and the very poor with no insurance are practically cut off from health care entirely.

In theory, one can avoid the “tax” by not buying insurance. But if you do really really need medical care, you’ll either be saddled with unimaginable debt or do without and die. The notion that the poor receive “free” treatment from emergency rooms is a lie. Hospitals that receive federal reimbursements have to stabilize a critically sick but uninsured person brought to them, but the bill will still be owed, and if it can’t be paid the cost is covered by the overcharges.

And, in the meantime, rural hospitals are closing, especially in states that didn’t expand Medicaid, because they don’t serve a big enough patient base to cover costs of staying open, an example of When Free-Market Capitalism Doesn’t Work. This puts lives at risk. However, judging by the ads on the teevee there is plenty of help for well-insured men with crooked weenies.

I don’t mean to trivialize the discomfort and distress caused by crooked weenies, but it’s an example of how money chases profits more than need. We can’t keep hospitals open; we apparently can’t provide adequate prenatal care to a lot of women and suffer abnormally high infant and mortality rates compared to other industrialized nations. But, by damn, Endo Pharmaceuticals has a patent on a drug for weenie crookedness, and they can spend millions on television ads to spread the word and rake in the big bucks. Your health care system at work.

For many years the United States has spent more per capital on health care than any other nation, yet those other nations manage to provide comprehensive health care for all its citizens, and we do not. Although those other countries provide comprehensive health care in many different ways, the one big difference is that we’re the only nation that still relies on for-profit health insurance companies to manage a large part of the spending.

The Big Lie that underlies much of the “debate” on spending for health care is the assmption that the cost of a Medicare for All or similar program would be all new money. $30 trillion over ten years? OMG! But $30 trillion over ten years is less than we’re spending now. We would be taking the money we’re already spending, remove the price gouging, overcharges, and waste, and apply it where it is needed. And what is needed will be paid for.

This is really not hard to grasp. Perhaps the next time Liz Warren is asked about whether she will raise taxes on middle-class people to pay for Medicare for All — how will you pay for it? — she should turn that around and ask about the costs of paying for the system we already have.

UPDATE: My new book is on sale this week! 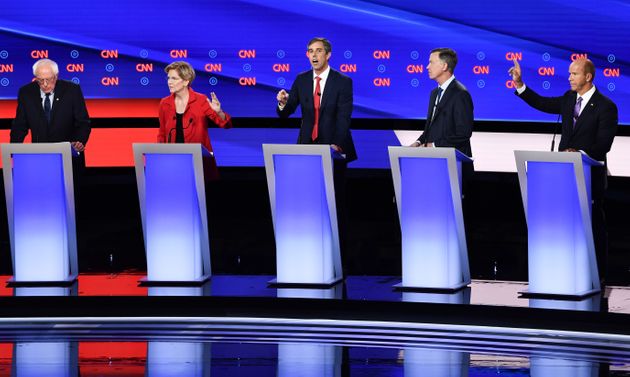 12 thoughts on “Universal Health Care: We’re Already Paying for It. We’re Just Not Getting It”