The latest in the threat by Matt Bevin to steal the Kentucky election:

The Kentucky Secretary of State, Alison Lundergan Grimes, declared Andy Beshear the winner of the election late Tuesday night, and when this was reported on CNN Matt Bevin blew a fuse. He accused Grimes of fraud and threw around accusations of voter fraud and “reports” — mysteriously, no one else heard them — of people being turned away from voting.

You might remember that Alison Lundergan Grimes is a Democrat who ran for Mitch McConnell’s Senate seat in 2014. If only. Anyway, one of her functions is to head the state board of elections. The board itself has eight members, four Republicans and four Democrats. As I understand it, once votes are certified by counties those results to go the state board, which then makes the results official. The counties were required to submit their certified forms by this Friday, so it probably is the case that the election hadn’t been officially certified when Grimes declared Beshear the winner.

Bevin requested a recanvass, which will take place November 14. According to CNN,

A recanvass is a reprint of the receipts from voting machines to check for reporting or clerical errors. After ballots are scanned, the machine tabulates those votes and prints out a receipt with the total.
During a recanvass, those receipts will be reprinted and checked again to make sure they were reported properly. It’s not uncommon for some clerical errors to occur during the initial vote tabulation.
All 120 counties would then fill out and submit the same certification forms again with the recanvass results.

No one seriously expects the recanvass to change the result. Assuming it doesn’t — after that the election board has until November 25 to certify the election. If Bevin still wants to challenge the result, he has 30 days after the certification to do so.
Currently one of Bevin’s supporters is robocalling everybody in Kentucky asking them to report on suspicious voting activity before the November 14 recanvass, although what good having such reports before November 14 isn’t clear. If Bevin is seriously going to challenge the election he’ll probably have to wait until after Thanksgiving. And this afternoon SecState Grimes asked Kentuckians to report such calls to her office.

My office has received concerns regarding a call being circulated. This call is not in conjunction with the Kentucky Secretary of State’s Office!

Please call @KySecofState ?? 502-564-3490 if you have received this call or have any questions! pic.twitter.com/DZrDA9UEY9

It also appears that Republicans in the legislature have had second thoughts about giving the governor’s seat back to Bevin.

“It’s time to call it quits and go home, say he had a good four years and congratulate Gov.-elect Beshear,” Stivers said in a brief Friday interview at the Capitol.

Voiding an election just because they can probably still looks bad even to Republicans. The process on the books for deciding a contested election hasn’t been used since 1899, and according to precedent involves armed militias and the assasination of one of the candidates. So there’s some understandble reluctance to go that route.

Also: My new book The Circle of the Way goes on sale November 12! That’s, like, Tuesday! You can pre-order from the publisher, from an independent bookseller, or from Amazon. 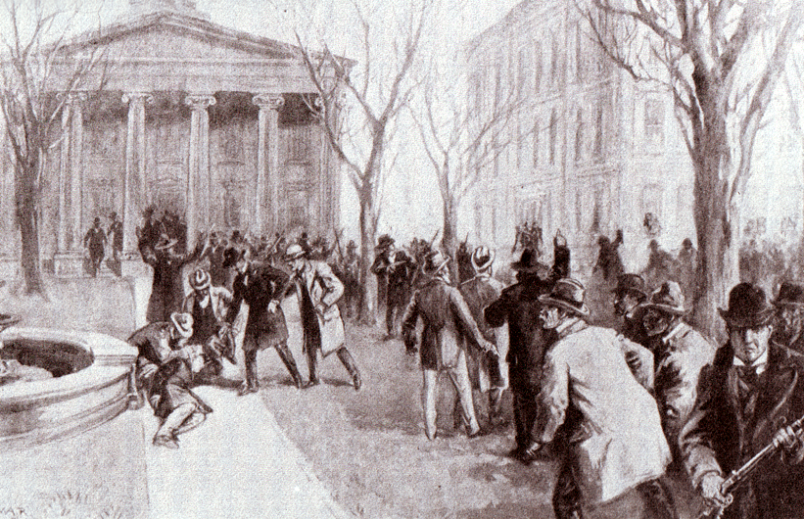 The Contested Election of 1899