Some day researchers will probably try to determine how many unnecessary deaths happened because of the black hole in the White House. For now, the remarkable thing is the degree to which U.S. institutions are self-organizing to make up for, well, Trump.

In Chaotic search for coronavirus treatments undermines efforts, experts say, Carolyn Y. Johnson of the Washington Post writes that the state of medical research into covid-19 is an uncoordinated mess.

In a desperate bid to find treatments for people sickened by the coronavirus, doctors and drug companies have launched more than 100 human experiments in the United States, investigating experimental drugs, a decades-old malaria medicine and cutting-edge therapies that have worked for other conditions such as HIV and rheumatoid arthritis.

Development of effective treatments for covid-19, the disease the virus causes, would be one of the most significant milestones in returning the United States to normalcy. But the massive effort is disorganized and scattershot, harming its prospects for success, according to multiple researchers and health experts. Researchers working around-the-clock describe a lack of a centralized national strategy, overlapping efforts, an array of small-scale trials that will not lead to definitive answers and no standards for how to prioritize efforts, what data to collect or how to share it to get to answers faster.

“It’s a cacophony — it’s not an orchestra. There’s no conductor,” said Derek Angus, chair of the department of critical care medicine at University of Pittsburgh School of Medicine, who is leading a covid-19 trial that will test multiple therapies. “My heart aches over the complete chaos in the response.”

I don’t have extensive knowledge of how research was conducted in past health emergencies. I’m not sure we’ve had a past health emergency that compares to what we’re facing now. Our current pandemic most closely resembles the great “Spanish flu” pandemic of 1918, but in those days medical science had no clue what to do about virus infections. That pandemic only ended after enough humans on the planet had been exposed and had either died or developed immunity. 675,000 Americans died in that pandemic, it says here.

However, it’s obvious the world is crying out for leadership. In administrations past, probably our CDC would have coordinated with WHO and some other large institutions to set priorities and establish standards, but with Mr. Temper “I take no responsibility” Tantrum in the way, that can’t happen on a national or global level. Or else the world will have to get along without us. As the article says, “the lack of coordination puts the world at risk of ending up with a raft of inconclusive and conflicting studies and little idea of what interventions work for the next wave of illness.”

All manner of trials and “studies” are being intiated in the U.S., but they’re being conducted so randomly and so often outside of established protocols that most are unlikely to produce usable information. For example, most institutions giving their patients remdesivir or hydroxychloroquine aren’t using a control group, so they can’t say whether outcomes are any different from those of patients not receiving the drugs.

Francis Collins, director of the National Institutes of Health, the nation’s largest biomedical research agency, acknowledged researchers’ frustrations but said in an interview Wednesday he has been working behind the scenes to launch an unprecedented public-private partnership to address the problems. He said the framework involves top pharmaceutical companies such as Pfizer and Johnson & Johnson, domestic and international government agencies including the European Medicines Agency, and academic research centers. …

… Anthony S. Fauci, director of the National Institute of Allergy and Infectious Diseases (NIAID), said in an email Tuesday that the partnership led by Collins is the “functional equivalent of a National Strategy.”

Did the White House even know this was happening? I’m guessing not, or Trump would have taken credit for it already.

Meanwhile, some states are figuring out work-arounds to make up for the lack of a functioning federal government.  For example, we now have three partnership groups of states that plan to work together on re-opening their economies. One is made up of New York, New Jersey, Connecticut, Pennsylvania, Rhode Island and Delaware. Another is California, Oregon, and Washington. Now we have a third partnership group, made up of Illinois, Michigan, Ohio, Wisconsin, Minnesota, Indiana and Kentucky. This is what states have to do to make up for a complete lack of leadership from Trump.

Yet the screwups continue. See A ‘War’ For Medical Supplies: States Say FEMA Wins By Poaching Orders at NPR.

An Open Letter to the New New Left From the Old New Left by “Former leaders of the Students for a Democratic Society” in The Nation. A bunch of people signed this. Good stuff.

Greg Sargent, Pathetic displays like these are all Trump has left

Eugene Robinson, Trump refuses to lead a country in crisis 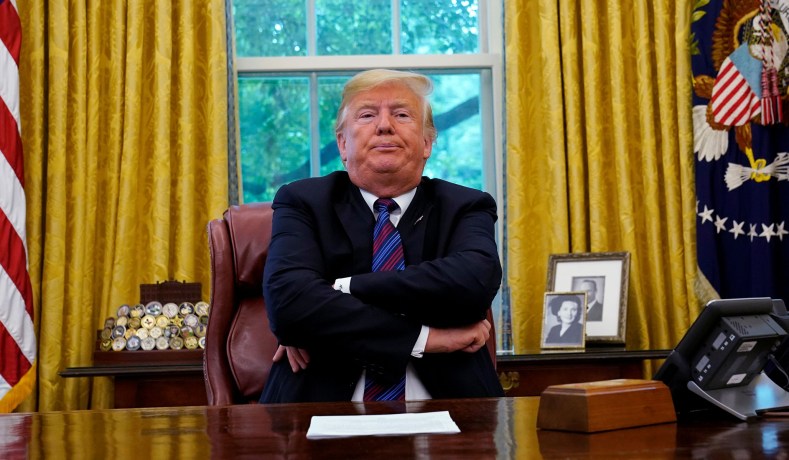 8 thoughts on “DIY Government in the Age of Trump”