Here’s another measure of What We’re Up Against — you may have heard there are very preliminary but still promising indications that the drug remdesivir may have some effectiveness in treating covid-19. It’s not a cure by any means, but it might help.

Weirdly, however, the MAGA-heads are shunning remdesivir and remaining loyal to the now discredited hydroxychloroquine. And they’re going this even though Trump promoted remdesivir in an Oval Office event and saw to it the FDA gave it a go-ahead to be used to treat covid-19.

Tina Nguyen reports in Politico that the people who promoted hydroxychloroquine — Fox News’s Laura Ingraham, for example — as a miracle cure are talking down remdesivir as too dangerous and too expensive. And why would this be?

The unexpected reaction appears to stem from the differences in how the two drugs came into the public spotlight. Hydroxychloroquine bubbled up through the MAGA grassroots — little-known investors promoted it online, got on Fox News and suddenly the president was talking about it from the White House. Remdesivir’s progress came through a government-funded trial that had the blessing of Dr. Anthony Fauci, the bête noire of Trump hardliners who blame the government’s top infectious disease expert for undermining the president and causing unnecessary economic damage with his social-distancing guidelines.

It’s also the case that remdesivir is still under patent to the ironically named Gilead Sciences, Inc., which makes it a Big Pharma product, whereas hydroxychloroquine is available in generic form. Apparently that makes hydroxychloroquine better, even if it doesn’t work.

These factors were likely enough to turn off people who had been using hydroxychloroquine as a political rallying cry, said David Rapp, a psychology professor at Northwestern University who studies how misinformation shapes beliefs and memory.

The hydroxychloroquine boosters, he said, “might find the alternative idea as not being pure, in the sense that it doesn’t come from Trump. It’s coming from other sources that they might not trust.”

In other words, there is absolutely nothing that escapes the tribal loyalty filter. Hydroxychloroquine has been accepted as the approved drug of the tribe; remdesivir is being pushed by outsiders and is therefore unacceptable.

Dana Milbank pointed out today that the gun-toting protesters swaming state capitol buildings appear to have no agenda other than being really, really angry. About something.

At the American Patriot Rally at the state Capitol in Lansing, Mich., on Thursday, many of the hundreds of protesters wore red “Make America Great Again” caps or flew “Trump 2020” banners and “Build the Wall” or “Drain the Swamp” signs. Others waved the yellow “Don’t Tread on Me” flags of the tea party. Demonstrators, several armed with military-style guns, then marched into the statehouse and stared down the police.

What did they propose to do with these weapons? Shoot the virus? Shoot the governor? Shoot themselves in the foot?

They didn’t seem to have a plan. They were there to rail against Democratic Gov. Gretchen Whitmer’s pandemic restrictions, though hers are not so different from those in other states, even those run by Republican governors. They howled about “tyranny” even though the country is now run by the man they helped elect. They fretted about losing their Second Amendment rights even as they carried guns, legally under Michigan law, into the Capitol. They complained about runaway government spending and money-printing even though Trump and the GOP have championed it.

I think we can say this is not a deeply informed crew. But in the past I have observed that righties tend to process information as allegories and symbols of things they value, or not, rather than deal with facts. They are living inside a complex myth in which they are noble and virtuous somethings — warriors? patriots? — perpetually beset by dark and satanic forces striving to deprive them of their Freedom. Freedom in this sense is a word weighted with murky symbolism that doesn’t seem to have much to do with individualism — our righties do think and act as one, like a dystopian Borg Collective –civil liberty, national security, or the rule of law. But whatever it is, it’s really, really important.

Likewise, the drugs hydroxychloroquine and remdesivir represent something to righties that is disconnected from science or medicine. It may be a little difficult to put one’s finger on exactly what that something is, and righties probably would be challenged to explain it themselves. But in the myth that forms their worldview, one drug is righteous and the other is not.

The one thing we can say about the pandemic protesters is that they’ve got grievances up the wazoo. We can question whether their grievances are justified, of course. A great many people have pointed out that in the U.S., only white men get to display firearms in a threatening manner with impunity. A mob of men carrying firearms — many of them semi-automatic rifles — into a legislative building like that wouldn’t be tolerated anywhere else in the world, I believe. Yet these guys think they suffer from a lack of freedom, or something. They are aggrieved, for sure.

This reminds me of one of my favorite Eric Hoffer quotes, from The True Believer:

Passionate hatred can give meaning and purpose to an empty life. Thus people haunted by the purposelessness of their lives try to find a new content not only by dedicating themselves to a holy cause but also by nursing a fanatical grievance. A mass movement offers them unlimited opportunities for both.

The “holy cause” in this case appears to be some 1950s-era Disneyfied vision of “patriotism” mingled — in some cases — with Christian dominionism. And of course there’s a lot of white nationalism mixed in there also. It’s less religion than a twisted idea of religion, just as their “patriotism” is a bizarro world idea of patriotism that has little resemblance to the real thing. Note, for example, the frequent use of Confederate and Nazi symbols by right-wing extremist groups in the U.S. However, it has to be said that some Michigan protesters accused Gov. Gretchen Whitmer of being a Nazi. Some parts of their mythology may need some work.

And there also must be villains. Dr. Anthony Fauci is a villain to the pandemic protesters, as is Bill Gates and a few other random people. 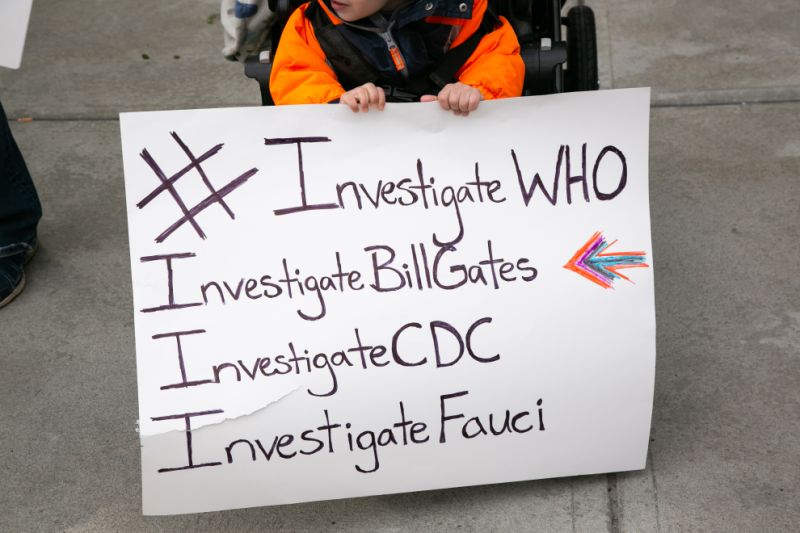 This guy in the photo below seems certain Dr. Fauci is wrong. About what? Maybe I’m being unfair, but I’d be willing to bet money this fellow has only a vague idea of anything Dr. Fauci ever said about anything and couldn’t defend his opinion that the doctor is wrong if his life depended on it. Fauci is wrong because of what he represents, namely the satanic forces calling for mask-wearing and sheltering in place and other weenie things that manly MAGA-heads just don’t do. 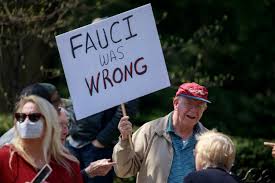 Although some of the people in the various pandemic protests have worn mask, mask-wearing itself is quickly becoming a mark of one’s tribe. See Wearing a mask is for smug liberals. Refusing to is for reckless Republicans.

The mayor of an Oklahoma city amended an emergency declaration requiring customers to wear face masks while inside businesses after store employees were threatened with violence.

“In the short time beginning on May 1, 2020, that face coverings have been required for entry into stores/restaurants, store employees have been threatened with physical violence and showered with verbal abuse,” City Manager Norman McNickle said in a statement. “In addition, there has been one threat of violence using a firearm.”

Joyce said in a series of tweets that he expected some pushback on requiring face masks but did not think there would be physical confrontations with employees and threatening phone calls to City Hall.

It’s increasingly the case that dealing with American right-wingers is a bit like dealing with hyenas. You can’t reason with them; all you can do is try to placate them so they don’t bite you. But the mayor should have enforced the law and thrown some of the hyenas in jail, IMO.

In brief, the Right has no ideas. It has no cause. It has no arguments. It has no agenda, other than maintaining the dominance of the tribe, its privileges, and its myths.

Perverting the Second Amendment and using firearms in lieu of a good argument is an American tradition at this point, particularly for white men. I mean, anyone arguing this is an “age of Trump” development needs to pick up a history book. This is some antebellum stuff here, some things that date back to before America was America. Violence or the threat thereof has been a method of political intimidation since time immemorial, and whiteness helps many escape legal or fatal punishment that others do not.

See also my blog post No Cause, Just a Movement from 2010. This was about teabaggers.

That’s still true. None of it means anything, probably. It’s all just reflecting the angry, twisted archetypes lurking in their ids. And you can’t reason with or compromise with such people, because there’s nothing there that would be the basis of any productive discussion or compromise. There’s just resentment. There’s just anger.

13 thoughts on “Righties Have Mythology, Not a Cause”