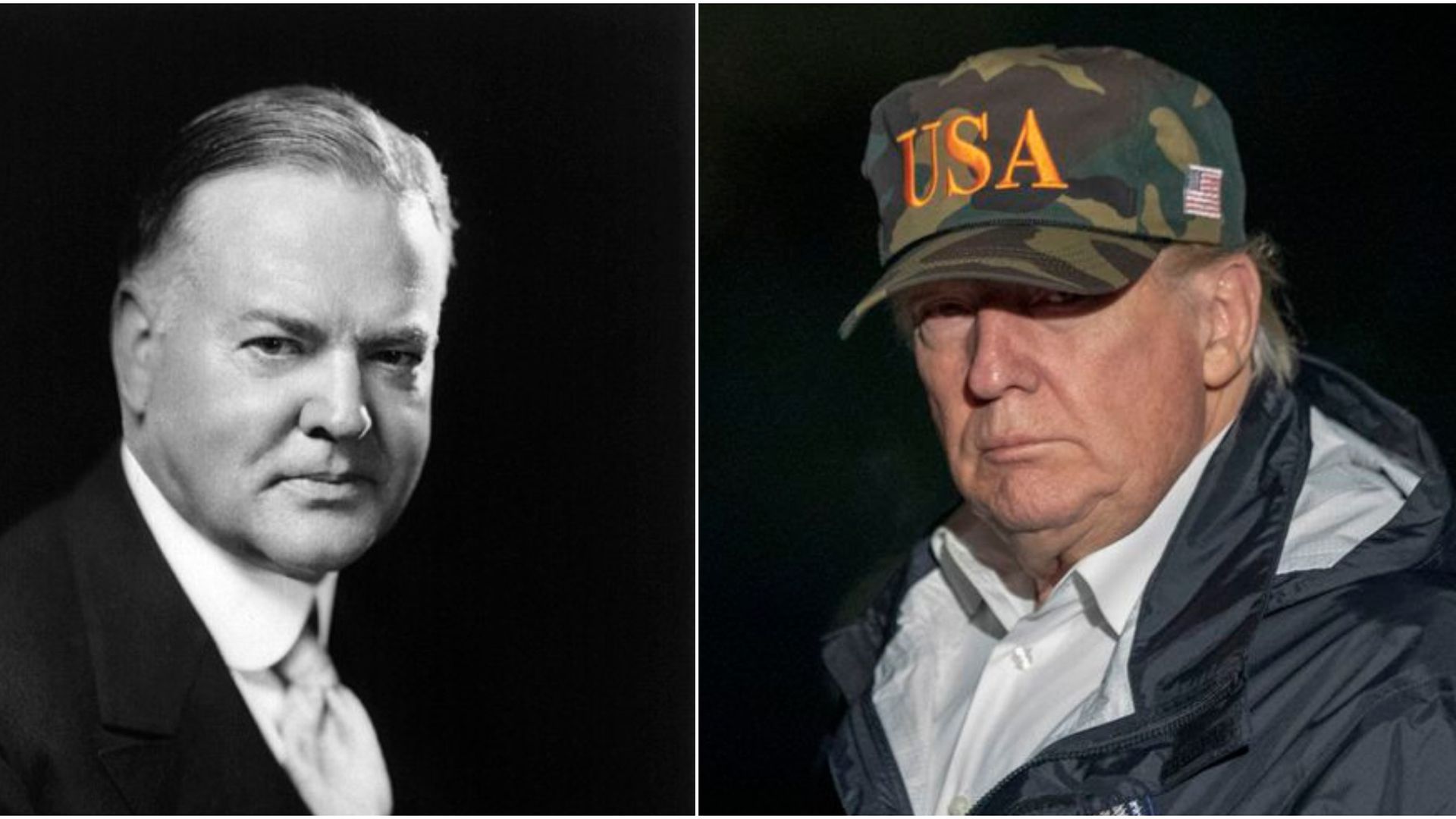 A lot of people are remembering FDR’s New Deal these days. But Kevin McDermott, a columnist for the St. Louis Post-Dispatch, looks back a bit further at Herbert Hoover: Facing another Great Depression, conservative thought is stuck in 1929.

When, for example, Congress sent Hoover a $2.3 billion plan that included public works programs and loans to small businesses and individuals, he derided it as “pork” and vetoed it. “Economic depression cannot be cured by legislative action,” he once declared.

Hoover opposed direct government aid to individuals, leaning instead on tax cuts, import tariffs (which backfired, prompting devastating retaliatory tariffs from America’s trading partners) and repeated assurances to the nation that, as he put it in 1930, “The worst is behind us.”

Is any of this sounding familiar?

For decades conservative propagandists have insisted the New Deal did not work at all, and that the Great Depression was ended by World War II; the New Deal, they say, had nothing to do with it. The truth is that the economy did grow after FDR became president in 1933 — 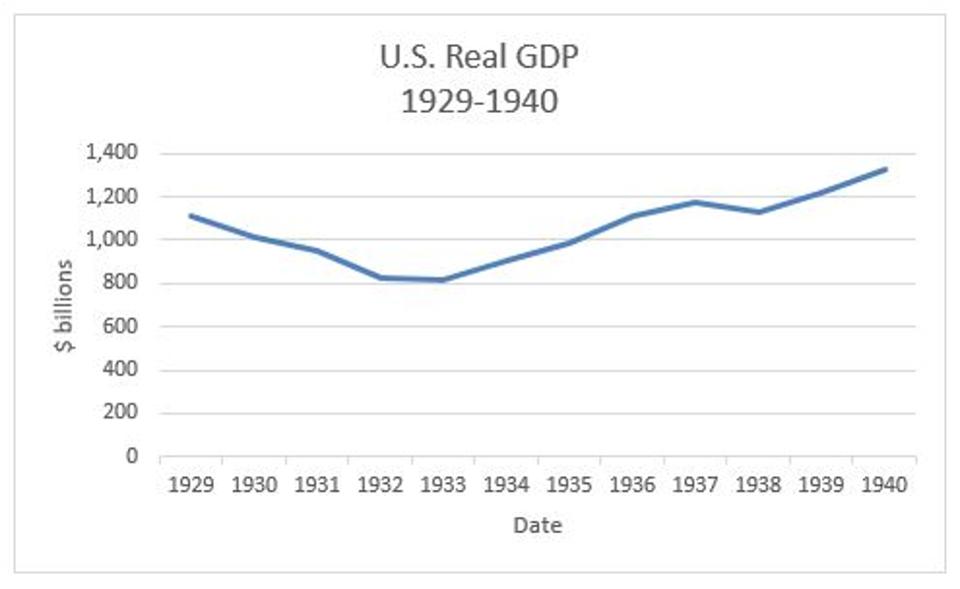 The time series of real GDP during the period 1929 through 1940. HERSH SHEFRIN https://www.forbes.com/sites/hershshefrin/2020/04/12/great-depression-economics-101-what-historical-numbers-and-charts-from-the-great-depression-foretell-about-the-economy-and-stock-market/#536e761b1e3c

It’s believed that dip in 1938 happened because FDR scaled back New Deal programs and spending in 1937. When the economy sagged, the spending was cranked up again. See Paul Krugman, New Deal economics, who explains the New Deal better than I can.

And conservatives don’t ask themselves how it is a war ended a depression. The answer is, the military build up necessitated by World War II was the New Deal on steroids — massive government spending that created jobs and put a lot of money in the hands of ordinary people, who then went out and bought new stuff. Again, Paul Krugman explains this better than I can. The problem with the New Deal, Krugman argues, is that it didn’t go big enough until pushed into more spending to take on the Axis Powers.

Back to Kevin McDermott:

Congressional Democrats last week unveiled a $3 trillion proposal that goes beyond bandages. It addresses the havoc individual Americans face in areas like health care, rent and mortgage payments and student loan debt, while providing almost $1 trillion to state and local governments to prevent additional waves of layoffs. Other big ideas are out there as well, some from within the GOP. Missouri Republican Sen. Josh Hawley’s proposal to mostly cover small-business payrolls for sheltered workers could be a far better use of federal dollars than waiting until those workers are unemployed.

Mitch McConnell is having none of it. “We have not yet felt the urgency of acting immediately,” the Republican Senate majority leader told reporters last week. “That time could develop, but I don’t think it has yet.”

What is he waiting for? Pearl Harbor?

The recently passed House bill is the HEROES Act.

The 1,800-page HEROES Act is an opening offer of Democratic priorities, starting with nearly $1 trillion in direct aid to state and local governments dealing with the fallout of the coronavirus pandemic. It would also include another round of $1,200 stimulus checks for eligible Americans (those making less than $75,000 per year). The HEROES Act provides $75 billion in mortgage relief, $100 billion for rental assistance, and $75 billion for coronavirus testing. In addition to expanding unemployment insurance, it would also forgive some student loan debt and provide more pay to essential workers.

The bill has been criticized from the Left for not being generous enough, and from the Right for containing provisions that aren’t directly related to the pandemic. However, I’ve yet to see a list of what those provisions are.

For all his cheerleading to open up the economy again, I haven’t found a quote attibuted to Trump himself expressing an opinion on the HEROES bill. However, “the White House” says that if passed, the bill would be vetoed. In this, Trump truly is reinacting Herbert Hoover. Ironically, back in 2018 Mike Allen wrote at Axios that Trump feared being turned into Herbert Hoover by the inaction of Federal Reserve Chair Jerome H. Powell. Powell, you might remember, has an aversion to lowering interest rates to goose the economy when the economy doesn’t need goosing. But now Trump is doing a grand job of turning himself into Hoover without Powell’s help.

The shutdown is doing huge economic damage. Hale Stewart explains the damage here. Paul Krugman has been arguing that as bad as the damage is, to re-open and then experience a second wave would be even worse. Healing the economy depends on addressing the pandemic, which means testing and tracing, which Trump doesn’t want to do because too much testing makes him look bad. And we really could be looking at an all-out depression. So there we are. Screwed.

A Hooverville in New York City

4 thoughts on “From Hoovervilles to Trumpvilles?”