The short answer to the question above is power, but power for what? to do what? on behalf of what? I’m starting to think that Republicans themselves don’t know any more. They’re running on reflex.

Their core policies now boil down to —

Republicans used to be big on foreign policy, especially “tough” foreign policy designed to spread American hegemony to alien places. But their foreign policy messages are so muddled now I get a sense they’ve given up on it, other than occasional bleating about getting tough on China. They’ve gone silent on perpetual war in the Middle East. Until as recently as last year they were trying to tie Mexican immigrants showing up at the border to ISIS and al Qaeda, but that was bogus, and I haven’t heard them go on about that lately. Russia is now their friend, and they are agraid to speak ill against Putin. They aren’t even sure what to say about Kim Jong Un.

I can’t think of anything else.

And the point is, how does this add up to anything approximating a political or governing philosophy? What is the underlying belief system tying these things together? Some might say “small government,” but the “small government” talking point was always just a scam to persuade middle- and working-class Americans not to expect government to do anything for them. Government can be plenty big enough when Republicans need it for something, like starting a pointless war somewhere or using government powers to deny reproductive rights to women.

Basically, the bulleted items above amount to strategies to appeal to random constituencies so that Republicans can get lots of campagin donations and votes. And maybe it really is just about appealing to the wealthy so that they can cash in themselves, politically and personally. That’s the only explanation that makes sense, frankly. But maybe there’s something else.

I admit that if we apply the same test to Democrats in recent years, the results are even murkier. The growing frustration many of us have had with the Democrats, even as we continued to vote for them, is that the party didn’t seem to stand for anything in particular. They have been more commited to civil liberties than Republicans, but that didn’t translate into consistent support for all freedoms for all people across the board. Most of the time they have been more committed to “safety net” programs than Republicans, but that didn’t mean doing everything possible to enable upward mobility for the poor or to prop up the sagging middle class. It just meant keeping Republicans from scuttling those programs altogether.

For the most part, since the 1980s the Dems have been trying to walk a middle way between what was left of FDR’s Democratic liberalism and Reaganism, and not being especially effective at either. By the time Hillary Clinton ran in 2016 the party faithful were conditioned to believe that ineffective tweaks, halfway measures, and baby steps that never arrive anywhere were just what the country needed, but as you’ll recall that didn’t turn out well.

But today I’m seeing a lot of musing from conservatives, who are admitting they’ve taken a wrong turn, somewhere. For example, at The Atlantic, Anne Applebaum compares her circle of conservative friends from the 1990s to what they are now. After dropping some names — Bill Kristol, John Podhoretz, Roger Kimball, Dinesh D’Souza, David Brooks, Laura Ingraham — she recalls the long-ago days of Reaganite sunny optimism just after the Soviet Union had fallen.

What really held that group together—and what drew me to it as well—was a kind of post–Cold War optimism, a belief that “we had won,” that the democratic revolution would now continue, that more good things would follow the collapse of the Soviet Union. This wasn’t the nostalgic conservatism of the English, or the hard-right nationalism found elsewhere in Europe; this was something more buoyant, more American—an optimistic conservatism that wasn’t backward-looking at all. Although there were darker versions, at its best it was energetic, reformist, and generous, predicated on faith in the United States, a belief in the greatness of American democracy, and an ambition to share that democracy with the rest of the world.

This was always bullshit, of course. Reagan’s “sunny optimism” was a thin veneer of nice over a lot of nasty, especially to African Americans and gays, and I see that Applebaum still isn’t ready to admit that. But let’s go on.

“Reaganite optimism slowly hardened into something better described as a form of apocalyptic pessimism,” Applebaum writes. She is writing in particular about Laura Ingraham, but this could apply to the party that nominated, elected, and protects Donald Trump. The only real difference between that “Reaganite optimism” and “apocalyptic pessimism” is that it’s finally dawning on the Right that they will lose the culture wars, and that their vision of a nation permanently dominated by white, culturally conservative Christians is being overrun by a new vision of diversity. In their guts, they know they’re losing. And that’s what’s pushing them into extremes.

And now the Republican faithful seem divided between those who are prepared to ride Trumpism into oblivion and those who are desperately trying to halt the Trump train while there might be something of Republicanism left to save. This explains the Lincoln Project. We might cheer their work and their spot-on ads, but we must not forget that this same crew was deeply complicit in building the Trump train and setting it on its current course, even if Trump isn’t what they intended. Charles Pierce:

… it should never be forgotten that many of these sharpies honed their skills in the Atwater-Rove era of Republican politics, and that during that time, the Republican Party sold its soul and lost its mind, I think irretrievably.

Cruelty, racism, sexism, xenophobia and homophobia became the essential raw materials out of which many of these folks molded candidacies. A toxic form of masculinity invaded the party’s personality. It was these campaigns that softened the ground for the march of this president* into the White House. If that were not the case—if, say, President Jeb Bush were running for re-election this time around—these deadly commercials would be aimed squarely at Joe Biden’s shining forehead. That should never be forgotten as we get closer to the election. Max Cleland is available for corroboration.  …

Even Jonah Goldberg, who never struck me as an introspective type, is gloomily admitting that the Republican Party now belongs to Roger Stone. The Republican Party has been taken over by hypocrisy and cynicism, Goldberg laments. Do tell.

Of course, whatever happens in November, most of the institutional infrastructure that has kept the Right propped up — the Heritage Foundation, the Federalist Society, Fox News — will still be in place with their same old agenda, whatever that is. I believe the one principle that they still probably hold in common is that Austrian school economics is next to godliness, so they will still be fighting progressive reform.

But the challenge to them is going to have to be, how will they sell perpetual austerity (except for the already wealthy) to voters without resorting to culture war dog whistles to keep the peasants in a state of being pissed off at liberals and minorities? Because if Trump goes down hard in November, this should signal that’s not a well they can draw from any more if they want to win elections.

At Washington Monthly, Ed Kilgore asks, What Motivates the Republican Party? It’s a good article, and I recommend reading it all. Kilgore documents clearly that the cynicism and hypocrisy that Jonah Goldberg wails about have been central to how the Republicans have operated for years. IOKIYAR, peeps.

Kilgore argues that what it really comes down to is this:

Over the last several decades, the Republican Party has been conquered by the Christian right and the overwhelmingly white Tea Party movement. The former has a theocratic vision for America. The latter militantly opposes economic redistribution. These movements converged with a realization that demographic trends were unfriendly to their party’s older base, generating a white identity politics that found its natural expression in the intensely divisive and intermittently racist stylings of Trump.

With Trump, the neoconservatives with their dreams of global American dominance were frozen out of this picture in favor of a new version of isolationism. And, of course, the few old-school Republicans left were frozen out some time back because today’s Republican party has no interest in governing at all, other than to create policies to pander to their favored interest groups (see bulleted list, above).

Referencing Steve Benen’s new book The Imposters, which I have not read, Kilgore continues,

Consider, for example, the party’s embrace of devious voter suppression and gerrymandering. Benen treats these as a by-product of Republican opportunism. But for a party existentially committed to restoring (or preserving) white, Christian supremacy in the face of increasing diversity, they are a direct means of delivering that dominance. Similarly, the determination of Republicans to resist any hint of gun regulation, despite public opinion (which The Imposters documents thoroughly), isn’t just a matter of gun lobby campaign contributions. Instead, it comes from a genuine belief among grassroots conservatives that armed struggle against what Trump calls “radical Democrat elites” must remain an option if conventional politics fails.

Arguably the root problem with the GOP, then, isn’t extreme partisanship or a lazy dependence on lobbyists or a taste for fact-free demagoguery. It is the belief that a virtual civil war is necessary to impose Red America’s will on Blue America, now and forever. Donald Trump, with his contempt for democratic norms and his authoritarian narcissism, knows about as much as he needs to for the task of banana republic rule. He is a suitable vessel for this project.

Trump’s entire campaign appears to be coalescing around a kind of call to arms, Red versus Blue. It’s not about governing at all, which Trump doesn’t do. It’s about who gets to dominate whom; who get to write the rules and maintain control, and the hell with republican government. It’s about power, baby. (See also, from 2014, Politics of the Id.)

So we’ll see how that works out. It seems to me that the road ahead for Republicans looks a bit like this: 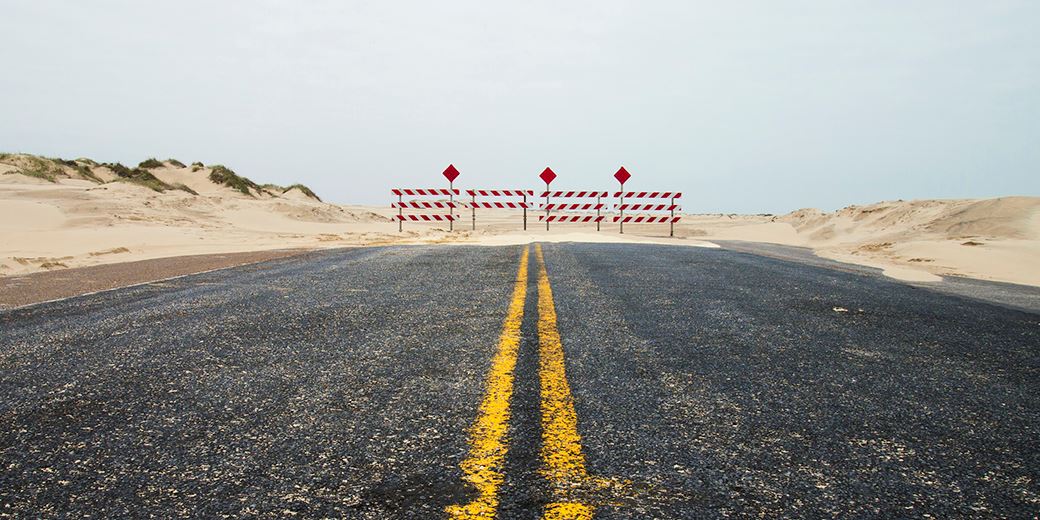 Meanwhile, with the Clintons finally shoved into retirement the Democratic Party has allowed itself to be pushed a bit to the left. Certainly, it’s not all the way there. But there are signs the future party will be led by progressives, especially progressives of color.

In the meantime, we’ve got Joe Biden, who so far has managed to signal he’s moving left and staying centrist at the same time. Well, whatever beats Trump. Paul Waldman:

When Sen. Bernie Sanders said recently that if Joe Biden implements his policy agenda, the presumptive Democratic nominee could be “the most progressive president since FDR,” he was probably right. In fact, something extraordinary is happening: Biden is getting more progressive in substance, yet it has done nothing to change his image as a moderate.

The Trump campaign is utterly flummoxed by this state of affairs; in reality, they long ago gave up trying to claim that Biden is some kind of extremist, and now can only shout that he’ll be a “puppet of the radical left.” But that doesn’t seem to be convincing anyone either.

The pandemic will be leaving us with damage that won’t be solved by Clintonian tweaks or halfway measures or baby steps that never arrive anywhere, and I get the sense that Biden knows that. And maybe a big enough majority of congressional Dems know that too.

15 thoughts on “What Do Republicans Want?”