Not to be an alarmist or anything, but all over social media I’m seeing Biden voters giving each other advice that will help re-elect Trump.

I am trying to get the word out that people need to vote in person if they can. I realize there is a pandemic. I realize a lot of polling places will be formidably crowded, slow, and frustrating. I realize that for some people in-person voting is genuinely dangerous or even impossible. But most of us can do it.

And those who can, should, because otherwise there is a real possibility that no one’s mailed or hand-delivered ballot will be counted, ever. This is true even if the postal service delivers your ballot on time. This is true even if you are planning to get your mail ballot to your board of elections without using the postal service. And Trump will get a second term no matter how we all voted.

Ed Kilgore explained this just a couple of days ago:

For months now, I and other observers have suggested that the president’s demonization of voting by mail wasn’t just aimed at securing restrictions in the practice by the states. He also wants his own supporters to vote in person. Why? Well, because if they comply, he is likely to take an early lead in Election Night returns that will only slowly erode as disproportionately Democratic mail ballots drift in after being authenticated and then tabulated. Since he has taken the position that mail balloting (except in Florida!) is fraudulent, and that elections decided after Election Day are “rigged” and stolen, then he will be in a position to claim victory and then contest any reversal of fortune.

If on the morning after the election Trump has a lead, or trails Biden very narrowly, you can count on weeks of contested vote counting. And the Trump campaign is already preparing for this. The Washington Post reported last week that Republicans are planning for “weeks-long legal fights in an array of states” to challenge the mailed votes.

The campaign plans to have lawyers ready to mobilize in every state and expects legal battles could play out after Election Day in such states as Pennsylvania, North Carolina, Michigan and Nevada, they said.

It won’t happen? Remember Florida 2000? What’s going to stop them from disqualifying ballots wholesale? The courts? Those are packed with Trump judges. Election officials will be terrorized until they comply. And it won’t be just a “Brooks Brothers riot” stopping the count this time. I can easily imagine mobs of armed MAGA goons breaking into election offices and destroying ballots. And the police will help them.

There’s no mystery about what President Trump intends to do if he holds a lead on election night in November. He’s practically broadcasting it.

First, he’ll claim victory. Then, having spent most of the year denouncing vote-by-mail as corrupt, fraudulent and prone to abuse, he’ll demand that authorities stop counting mail-in and absentee ballots. He’ll have teams of lawyers challenging counts and ballots across the country. …

… The only way to prevent this scenario, or at least, rob it of the oxygen it needs to burn, is to deliver an election night lead to Biden. This means voting in person.

And if you really can’t vote in person …

No, not everyone will be able to do that. But if you plan to vote against Trump and can take appropriate precautions, then some kind of hand delivery — going to the polls or bringing your mail-in ballot to a “drop box” — will be the best way to protect your vote from the president’s concerted attempt to undermine the election for his benefit.

However, your hand-delivered ballot won’t be counted as quickly as the in person votes. States have different procedures about this, but usually the mail and absentee ballots are not counted until after in-person results are tallied.  This has resulted in a new phenomenon called the “blue shift.” Early returns lean right; later returns lean left. See David Graham, The ‘Blue Shift’ Will Decide the Election.

This brings me to the other way that advice on social media can be wrong. Every state has its own election laws and procedures. If you absolutely must vote by mail, don’t assume that what works for your Facebook friend who lives in another state will be true for you. For example, in some states mailed ballots must be received by election day, and in others they must be postmarked by election day. Some states have drop boxes for ballots; some do not. You may need to get your ballot notarized, and you may have to pay for that. Or not. It’s all different around the country.

To find out what will be true for you, don’t go by what you read on Facebook. Go to your state’s webpage. In some states, running elections is the job of the secretary of state. In others, there is some appointed official, or possibly an elections commission. If you have questions about procedures in your state, check out that entity’s web page, and if you don’t find an answer call the office.

And don’t plan on using UPS or Fedex to deliver your ballot. By law, private delivery services may not handle ballots. Only the USPS, or an election official, or you, can handle your ballot. If a non-official third party handles your ballot, it probably will be invalidated.

Again, though, if you can vote in person, please vote in person. We must get as many in person votes “in the bank” on election day as we possibly can to avoid a stolen election. This is our Valley Forge. Do it for your country. 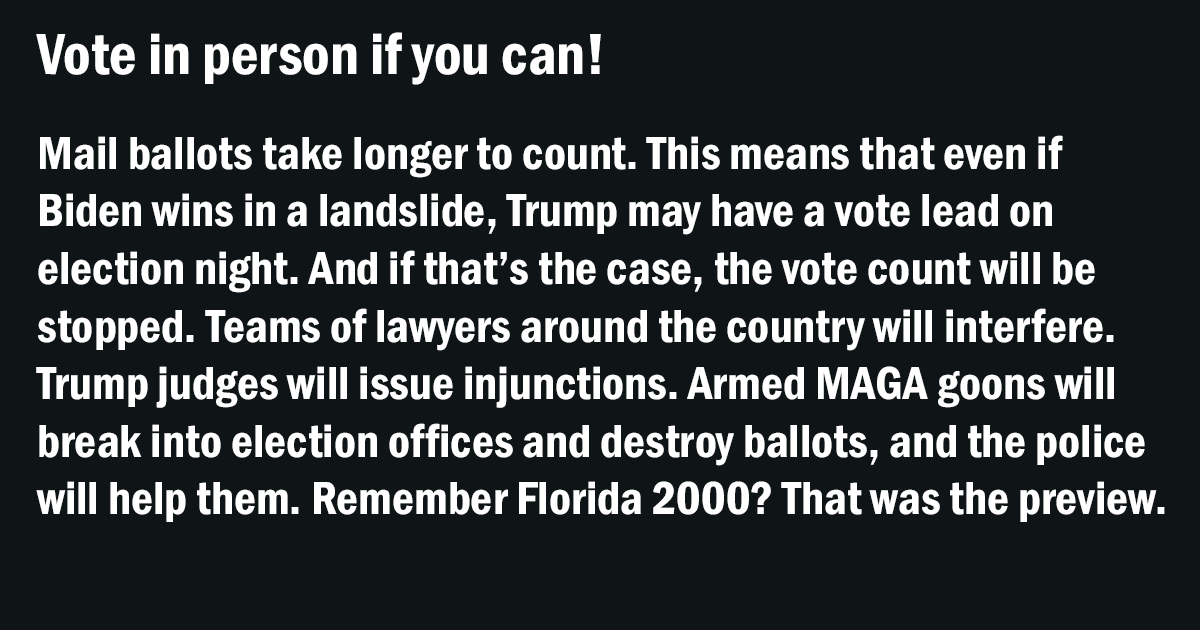 8 thoughts on “Please Vote in Person if You Can”