According to Fox News, Trump is holding the Postal Service hostage to force Democrats to negotiate. Seriously.  This morning, Fox News reported that chief of staff Mark Meadows says Trump is ready to sign a compromise bill, if only those stubborn Democrats would compromise.

“If my Democrat friends are all upset about this, come back to Washington, D.C.,” White House Chief of Staff Mark Meadows told CNN’s “State of the Union.” “Let’s go ahead and get a stimulus check out to Americans. Let’s make sure that small businesses are protected with an extended [Payroll Protection] Program and put the postal funding in there. We’ll pass it tomorrow. The president will sign it.”

“This will all go away because what we are seeing is Democrats are trying to use this to their political advantage,” Meadows continued.

And, of course, Democrats passed a bill with all those things in it back in May. It stalled because of Mitch McConnell. Fox News viewers and QAnon believers probably don’t know that. As a political ploy, claiming that he’s screwing with the Postal Service to force Democrats back to the negotiating table is not bad, I suppose. It’s better than admitting he’s screwing with the Postal Service to stop mail in voting, as he has already done. And which has been all over the news, although perhaps not Fox News.

However, just yesterday Trump was telling reporters that “the time is not right” for him to negotiate with Democrats.

We might be seeing an admission on Meadows’s part that screwing with the Postal Service for any reason was a bad move. I have not yet seen any polls that include the postal service issue, but even the St. Louis local television news reported that Trump is screwing with the postal service to stop vote by mail. For them, that was ballsy. And there are local news stories all over the country about mail being slow, veterans not getting their medications, people waiting for checks to arrive, etc. And all these news stories mention Trump.

This is not 12 dimensional chess. This is Trump’s id getting ahead of him, as usual. The Washington Post reported yesterday that Trump is obsessed with the Postal Service.

Soon after taking office in 2017, President Trump seized on the U.S. Postal Service as an emblem of the bloated bureaucracy. “A loser,” he repeatedly labeled one of America’s most beloved public institutions, according to aides who discussed the matter with him.

Allies coddled Trump by telling him the reason he lost the popular vote to Hillary Clinton in 2016 was widespread mail-in balloting fraud — a conspiracy theory for which there is no evidence — and the president’s postal outrage coarsened further.

Then Trump complained to senior White House advisers that Jeff Bezos — a presidential foe in part because he owns The Washington Post, whose news coverage the president thought was unfair and too tough on him — was “getting rich” because Amazon had been “ripping off” the Postal Service with a “sweetheart deal” to ship millions of its packages, one of them recalled. They explained that this was not true and that the Postal Service actually benefited from Amazon’s business, the adviser added, but the president railed for months about what he described as a “scam.”

Trump really is like an old-time Mafia boss who can’t let go of vendettas.

Trump’s fury with the Postal Service and mail-in balloting has become something of an obsession in recent weeks. The president devotes extensive time to reading news reports and other materials about mail-in ballots, talking about the topic with his advisers and thinking about how to block such voting, according to one senior administration official.  …

…Trump’s ire at the Postal Service grew so intense in the spring of 2018, a time when he was routinely attacking Amazon on Twitter, that his advisers griped privately about the presidential preoccupation.

As Larry Kudlow prepared to take over for Gary Cohn as National Economic Council director in 2018, Kudlow told Cohn, “I just talked to the president and we have got to do something about this special deal Amazon has with the Postal Service,” according to two former senior administration officials who described the episode, which has not previously been reported.

Cohn burst out laughing and told Kudlow: “It’s not my problem anymore. I’ve heard about this all the time since I’ve been here, and I’ve tried explaining that the post office actually competes for and wants last-mile delivery.”

Trump will not understand anything he doesn’t want to understand. It was explained to him repeatedly that the deal between the Postal Service and Amazon was a good thing and that he didn’t have the authority to cancel the contract. The WaPo article points out that Trump’s business experience is in real estate, golf courses, and marketing, none of which depend much on logistics. But most businesses do depend on logistics, in one way or another. Trump has no clue what role the Postal Service plays in the U.S. economy.

Everybody assumes that DeJoy is making changes in the Postal Service to deliberately slow down service and discourage vote by mail. And maybe that’s true. But there’s another possibility. I worked in book and magazine publishing for many years, for both small companies and international corporations. I realized early on that the people in the top executive suites — especially in the big corporations but to a remarkable extent in small companies as well — had no idea how the product got made. This was usually because they came from the marketing and finance departments, not production, manufacturing, or editorial. We worker bees who turned manuscripts into books were alien creatures to them.

From time to time, they’d bring in outside consultants who were supposed to “streamline” our department and make it more “efficient.” The consultants inevitably screwed everything up, because they had no experience doing what we did and had no clue why we did what we were doing. Nor did any of them ever talk to us worker bees about our jobs and what we’d like to see improved. Instead, they’d observe us for maybe half a day and then change our workflow in some gawdawful way that produced all manner of bottlenecks and errors. And for doing that I’m sure they collected a six-figure check. Usually after a few months the vice president in charge of whatever would get tired of missed deadlines, costly mistakes, and listening to us bellyache and let us go back to doing things as we preferred to do them.

And after going through this a few times, nothing terrified us bees more than seeing men in expensive suits strolling through our department. No good ever came from that.

So when I heard LeJoy say he was streamlining the Postal Service, it rang bells. I’m sure he never bothered to consult anyone with actual experience at getting the mail out, because the big shots never do. Of course, it’s possible he really is trying to slow the mail down, but IMO it’s just as possible he’s just the standard overpaid white man in an expensive suit who thinks he knows everything.

The next question, of course, is what will Democrats do about it? Right now all of Congress in enjoying the traditional August recess, and I am sure most members of Congress have scheduled that time for campaigning. But over the past few hours the House Democrats have gone from “considering” cutting the recess short to scheduling DeJoy to testify before a House Oversight panel on August 24. That’s still a week away, but I guess that was as soon as they could get the gang together.

Another update: We’ve all heard that DeJoy ordered sorting machines to be dismantled and discarded because they weren’t being used right now. A lot of postal workers have testified to this. (Such activity is typical of Stupid Consultant Ideas, mind you.) Now the White House is denying anybody is messing with the sorting machines.

White House Chief of Staff Mark Meadows said in an interview on Sunday that US Postal Service mail-sorting machines will not be taken offline between now and Election Day — a statement at odds with reports that the Postal Service is decommissioning 10 percent of its machines this year under a new policy.

The way Meadows made the claim — by denying they were being removed in the first place, and making questionable claims in response to an on-air fact check by CNN’s Jake Tapper — left it unclear if he was actually pledging a reversal of the ongoing decommissioning of machines. …

…On CNN’s State of the Union, Meadows first told Tapper that sorting machines being taken offline was “not happening” and that claims to the contrary were simply the product of Democrats trying to “stoke fear” with a “political narrative.”

Then Meadows went on to say that machines were taken down during the Obama Administration, not by the new guy. Yes, blame Obama.

When Tapper persisted in asking why sorting machines have been taken offline recently under new rules, Meadows said, “Get your producer to share where exactly those sorting machines were taken offline. Let them whisper in your ear, because what I’m telling you is you’re picking up on a narrative that’s not based on facts.”

Later in the episode, after being updated by a producer, Tapper fulfilled Meadows’s request: He cited Chris Bentley, president of the National Postal Mail Handlers Union Local 297, which covers Kansas and part of Missouri, who told CNN that postal management “has already taken out four machines in Kansas City, two machines in Springfield, Missouri, and one machine in Wichita, Kansas, that is earlier this year — under this new postmaster general.”

Go ahead and read this whole article. It’s a hoot. 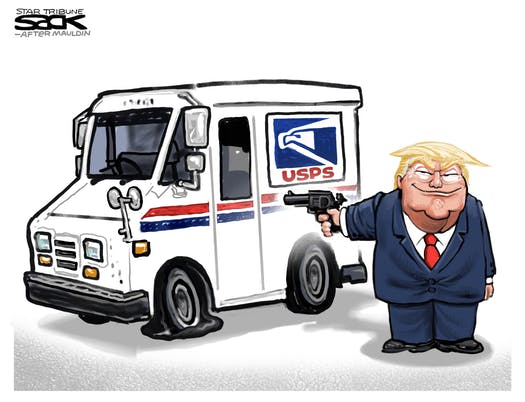