Rep. Ann Wagner (R-MO) is not my congresswoman. Her district is made up of St. Louis suburbs. She is a far-right fruitcake who is a reliable vote for whatever Republicans are pushing. Her Democratic opponent is state Senator Jill Schupp, whose voting record looks pretty good to me, and I would have no problem voting for her if I lived in her district.

I bring this up only because I am subjected to Ann Wagner’s television ads on the St. Louis stations. I’ve been all over the web this morning trying to find a video of the latest one, and I’m sorry I couldn’t find it. It is absolutely hysterical. A voice speaking over dark images of rioters setting fire to cars and buildings accuses Schupp of being a friend of sex offenders and sex traffickers and a member of the “far left mob.” It’s so over-the-top one would have to be an idiot to believe it. But we’re talking about Republican voters, so they probably do.

The business about Schupp and sex traffickers is left over from an earlier race. In 2014 she defeated Jay Ashcroft, the son of Bush II era Attorney General John “Crisco” Ashcroft, to be elected to the Missouri state senate. Ashcroft accused Schupp of “siding with dangerous predators” mostly because she initially opposed a bill to allow prior convictions to be admissible in criminal trials for sex crimes. You can read about the Ashcroft accusations here. Wagner is just repeating the old charges.

But the obsession with sexual traffickers and predators takes us to QAnon, which is a very dangerous thing that’s not going to go away if Trump is defeated in November. If you haven’t been paying much attention to QAnon, I urge you to read The Prophecies of Q by Adrienne LaFrance at The Atlantic. QAnon began as Pizzagate and has since grown into a massive complex of absolutely batshit conspiracy theories and endtime apocrypha all bundled together and fervently believed by way too many people.

QAnon is emblematic of modern America’s susceptibility to conspiracy theories, and its enthusiasm for them. But it is also already much more than a loose collection of conspiracy-minded chat-room inhabitants. It is a movement united in mass rejection of reason, objectivity, and other Enlightenment values. And we are likely closer to the beginning of its story than the end. The group harnesses paranoia to fervent hope and a deep sense of belonging. The way it breathes life into an ancient preoccupation with end-times is also radically new. To look at QAnon is to see not just a conspiracy theory but the birth of a new religion.

The notion that the Democratic Party and the “deep state” are fronts for a massive child sex trafficking/cannibal cult is at the center of QAnon, but it has become something of a global collaborative effort and is always sprouting new variations of crazy. They make the old Tea Party and John Birch Society seem rational. And there is good reason to believe the movement or mass psychosis or whatever it is will become increasingly dangerous, especially if Trump loses in November. See Jason McGahan, Inside QAnon, the Conspiracy Cult that’s Devouring America.

Defense lawyers for the man charged in the murder of the underboss of the Gambino crime family in New York City, say their client is obsessed with conspiracy theories and believed the mobster was a member of the “deep state.” (The same man had previously attempted to make citizen’s arrests of Schiff and Congresswoman Maxine Waters.) The landscaper arrested for igniting the 2018 wildfire that burned nearly 20,000 acres of Orange County and destroyed a dozen homes had posted dozens of conspiracy videos on his Facebook page, including some about a satanist cult that ruled the world and a mysterious U.S. intelligence insider who is working with Donald Trump to thwart it. A QAnon believer and self-identified member of the alt-right Proud Boys in Seattle killed his brother in January by stabbing him in the head with a four-foot-long sword, later claiming he thought his brother was a lizard. In June of last year, an armed man inspired by a Q post barricaded himself in an armed vehicle and blocked traffic on the Hoover Dam bridge for hours. He was demanding the Justice Department release a (nonexistent) secret report on Hillary Clinton’s use of a private email server that Q had claimed was being stashed at the dam.

Granted, the guy who thought his brother was a lizard probably had issues that went beyond conspiracy theories. But I think nearly anyone who soaks himself in stuff like this could lose his grip on reality. See also Conspiracy theories like QAnon could fuel ‘extremist’ violence, FBI says.

David Atkins writes that the Republican Party can’t control QAnon because it’s little  more than a conspiracy cult itself.

The problem is that Republican Party has been relying on only slightly milder forms of conspiratorial politics for years now. It’s staggering to ponder the implications of modern Republican ideology all at once, but consider a few examples. To be a modern Republican you have to believe that thousands of climate scientists are engaged in a worldwide conspiracy to falsify data for grant money, while oil executives are victims trying to expose the truth. You have to believe that hundreds of thousands or even millions of people are engaged in coordinated voter impersonation fraud, abetted by hundreds of local elections officials in both blue and red areas, and no one has ever leaked it or been caught. You have to believe in a massively coordinated effort to take away guns not to protect children from being shot in schools and movie theaters, but to leave white people defenseless in a race war or implement a Stalinist state tyranny. You have to believe that social services are a racket to keep racial minorities voting for Democrats, rather than an attempt to mitigate the inequities of brutal capital markets in a society riddled with horrific structural racism. And so on.

And you’d have to be demented enough to believe Ann Wagner’s television ads, for that matter. Seriously, what else does the Republican Party have to offer any more? They used to call themselves the “party of ideas” even though it often seemed their only idea was to cut taxes. But now they have no interest in government at all, except as a means to preserve the wealth and privilege of the already wealthy and privileged.

Ezra Klein has a great piece up called Why Republicans are failing to govern that’s very much worth reading all the way through. I just want to point to this bit:

Politically, the Republican Party’s current approach is so self-sabotaging that I figured I must be missing something. Someone must have a plan, a theory, an alternative. Chaos is Trump’s brand, but surely McConnell won’t walk passively back into the minority. And so I began asking Republican Hill staffers and policy experts for correction. What wasn’t I seeing? What was the GOP’s policy theory right now? What do Republicans actually want?

I posed these questions to Tea Party conservatives, populist reformers, and old-line Reaganites. The answer, in every case, was the same. Different Republican senators have different ideas, but across the party as a whole, there is no plan. The Republican Party has no policy theory for how to contain the coronavirus, nor for how to drive the economy back to full employment. And there is no plan to come up with a plan, nor anyone with both the interest and authority to do so. The Republican Party is broken as a policymaking institution, and it has been for some time.

“I don’t think you’re missing anything,” said a top Republican Senate staffer. “You have a whole bunch of people in the Senate posturing for 2024 rather than governing for the crisis we’re in.”

“There hasn’t been a coherent GOP policy on anything for almost five years now,” a senior aide to a conservative Senate Republican told me. “Other than judges, I don’t think you can point to any united policy priorities.”

Basically, the GOP doesn’t have anything else to run on but to accuse their opponents of eating babies.

See also Paul Waldman, Is QAnon the shape of the Republican backlash to come? And sorta kinda related, there’s a fascinating piece at Rolling Stone by Andy Kroll called Killing the Truth on the Seth Rich conspiracy theory. I tend to tune this stuff out, but perhaps we should be paying attention. 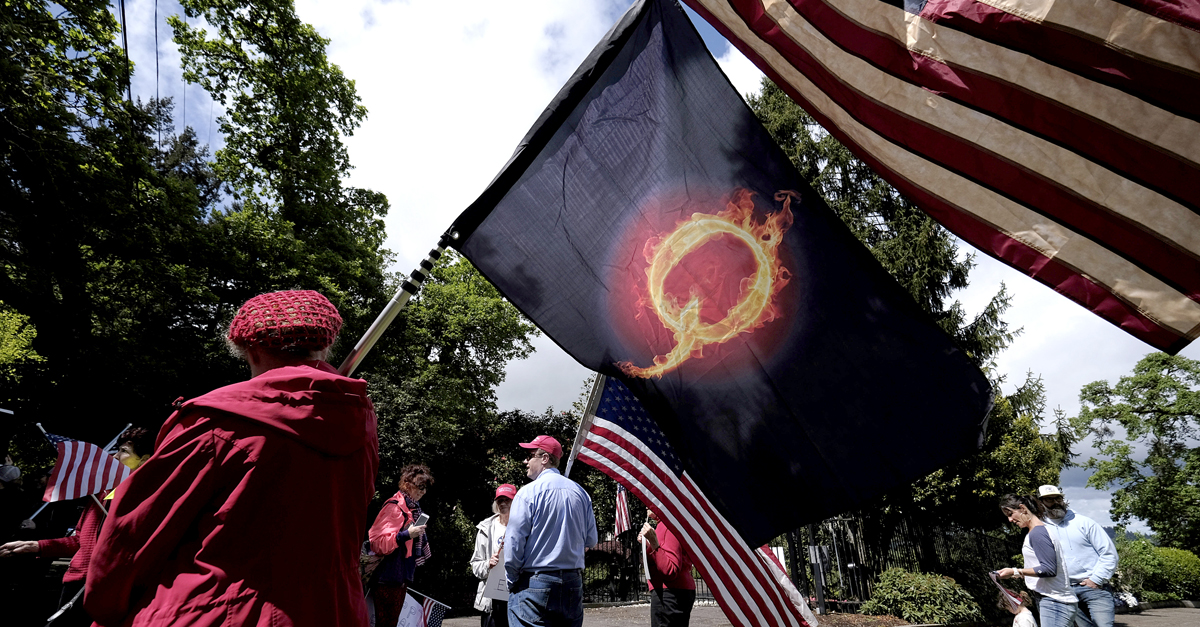 A woman holds a QAnon flag as protesters gather outside Governor Kate Brown’s residence in Salem, Ore., on April 25, 2020, calling for novel coronavirus restrictions to be lifted so that people can get back to work. (Photo by Alex Milan Tracy/Sipa USA)(Sipa via AP Images)

8 thoughts on “Watch Out for the Crazy”