I was pleasantly surprised by the first night of the Dem virtual convention. There were a few small glitches, as there always are with live events, but on the whole the evening was engaging, inspiring, and often gripping. Clearly, the Dems had thought this process through and took care to get the details right. I think they should consider doing conventions this way from now on, in fact.

Not everyone agrees; a couple of people at Slate thought the evening was weird.  But Michelle Obama’s talk got five stars.

I believe the Democrats committed to a mostly virtual convention some time in mid June. The Republicans, meanwhile, wasted a lot of time and money trying to accommodate Trump’s insistence on a live, maskless, no-social-distancing event. They didn’t give up on that plan until July 23.

This means the Republicans gave themselves a lot less time to pull something together to put on the teevee screen. Their convention begins is next week.

According to news stories, among the mostly still unknown speakers will be the McCloskeys and Nick Sandmann, the Catholic schoolkid who became famous for dissing a Native American elder. The theme for the RNC convention is, apparently, “Fear, Grievance, and General Whining.” I’m looking forward to more videos of rioters burning cars.

The RNC does have some recent experience to go on, such as the virtual Texas Republican Convention. Which was a disaster. Texas Monthly called it a “goat rodeo of galactic proportions.” But maybe Republicans will have learned from mistakes. Or will at least use a different technical team.

Right-wing media is dismissing the first night of the Dem convention as a snooze. Some guy at Townhall called last night “the night Trump won re-election.” He was especially outraged at one speaker who blamed Trump for her father’s death.

But what’s left of the establishment Republicans must realize they’ve got a big act to follow. They’ve got to be nervous.

Now back to the first night of the Dem convention, which is getting mostly glowing reviews in the mainstream press. This is from the Washington Post theater critic.

Without convention floors and podiums to cover, the cable channels and other outlets gave the Democratic National Committee extraordinary control over the evening’s content. Not only did that sideline the anchor folk for much of the proceedings, but it also allowed for a smooth and surprisingly rich program of videos and live speeches to flow dynamically from segment to segment. And with actress Eva Longoria Bastón serving as a serene and confident host from a Los Angeles studio, Night 1 of the four-night production came across as an elegant, multidimensional campaign ad.

As television drama you can’t beat the old days when the conventions really chose the nominees. But since the primary system took over the conventions have just been television extravaganzas anyway. I don’t miss the spin room interviews and the stupid hats. Dana Milbank:

Gone, mercifully, are the corporation-financed parties where lobbyists ply their trade and big donors buy access to public figures. Absent, thankfully, are the convention-floor pageantry and theatrics that haven’t meant a thing for decades. Missing, too, are the preening journalists bagging trophy interviews on media row. Vanished are the scores of interest groups threatening to withhold support if they don’t get their moments in the spotlight and their planks in a platform the nominee will eventually ignore.

Milbank had good things to say about Bernie Sanders’s talk:

Indeed. So, good first night. I have concerns about the second night:

The old-guard of the Democratic Party — in speeches by Senate Minority Leader Chuck Schumer of New York, former Secretary of State John Kerry and former President Bill Clinton — will share the spotlight with Rep. Alexandria Ocasio Cortez of New York, the young progressive star who, despite being given only a minute to speak, could provide the night’s most closely watched moment.

AOC should get more time. Maybe not a primary slot — she’s a junior congresswoman — but more than a minute.

And here’s the closing musical number, which MSNBC walked over so I couldn’t watch it last night. 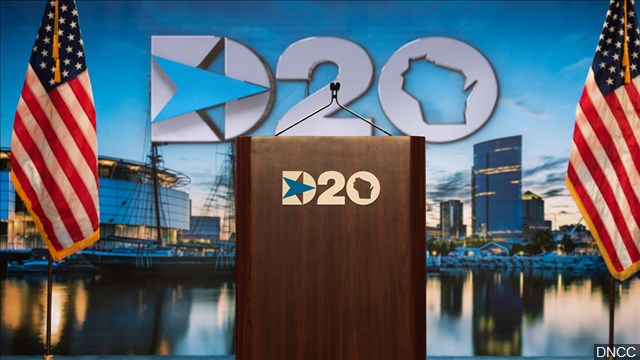 20 thoughts on “After Last Night, the GOP Has Got to Be Nervous”