I don’t want any more time to go by before noting the findings of the Senate Intelligence Committee that found there really was all kinds of cooperation between the Trump campaign and Russia in 2016. For good summaries, see Nancy LeTourneau, A Bipartisan Rebuke of Barr’s Attack on the Trump-Russia Investigation and Jennifer Rubin, As it turns out, there really was collusion between the Trump campaign and Russia.

So that was the real conspiracy. Now we go to Greg Sargent, Trump’s backing of far-right conspiracy theorist frames the stakes for 2020.

It should be a much bigger story that the president of the United States has now enthusiastically endorsed the congressional run of a virulently Islamophobic far-right conspiracy theorist.

This isn’t just highly newsworthy on its own. It also illuminates the stakes of the 2020 presidential race in a fresh way — one that should help forestall the sort of terrible errors in media coverage of President Trump’s hate-mongering that we saw in 2016.

The virulently Islamophibic far-right conspiracy theorist endorsed by Trump is Laura Loomer, who is indeed a far-right conspiracy theorist on the far-right fringe of the far right. Loomer won the Republican primary to run for the U.S. House seat in Florida’s district 21, West Palm Beach. According to the Palm Beach Post, with Loomer when she celebrated her victory were Roger Stone, Milo Yiannopoulos, and Proud Boys founder Gavin McInnes. Among the vilest of the vile.

Loomer is so toxic that some other Trump supporters are upset he congratulated her.  Example:

A gun-rights advocate who recently announced he had joined President Donald Trump’s 2020 campaign team appeared to split with the president Tuesday over his support for Laura Loomer, who claimed victory in her Republican congressional primary in Florida.

“Great going Laura,” Trump wrote in a tweet, celebrating the right-wing politician’s victory. “You have a great chance against a Pelosi puppet,” he said, suggesting he believes Loomer, who has repeatedly come under fire over racist comments, could defeat Democratic incumbent Lois Frankel.

Tweeting out against Trump’s endorsement, JT Lewis, a gun rights advocate who lost his brother in the 2012 Sandy Hook Elementary School shooting, said he believed Loomer has no place in the GOP.

“Laura Loomer is a Parkland and Sandy Hook hoaxer. She has no place in the Republican Party I know!” Lewis wrote on Tuesday.

Robby Soave, a senior editor at the libertarian Reason, wrote an editorial headlined The GOP Should Shun Laura Loomer. Conservative journalist Brad Polumbo also objected. “This is an embarrassment for the GOP,” Polumbo wrote for the Independent (UK). “Loomer is an extremist with bigoted views. She is not worthy of conservative support.”

Hey, the entire Republican Party is not worthy of conservative support. Where have you been?

I was not aware that I had ever paid attention to Loomer, but it turns out she was one of the wackjobs who tried to shut down a production of Shakespeare’s Julius Caesar back in 2017 because she felt it was insufficiently respectful to Donald Trump. And note the irony that it’s wingnuts who perpetually whine about “Cancel Culture.”

How nutty is Loomer? Her Wikipedia profile says she was banned from the 2019 CPAC convention “after attempting to heckle reporters after chasing them through the conference.” She’s been permanently banned from Twitter, Facebook, GoFundMe, VenMo, PayPal, Instagram, Lyft, and Uber. Did I mention she used to work for James O’Keefe?

I don’t know what Loomer’s chances are in the general. She’s running against an incumbent Democrat, Lois Frankel, who served in the Florida legislature for many years and is a former mayor of West Palm Beach.

Greg Sargent points out that even as Trump is embracing the likes of Loomer, he is trying to paint Joe Biden as a far-left extremist.

Through sheer force of his magical lying, Trump is trying to transform this embrace of diversity into something hermetically sealed off from reality. In Arizona, Trump claimed Biden and Democrats are “sick.” That they want the “complete elimination of America’s borders.” That they want to give every migrant “a free ticket to invent an asylum claim.” That Biden would “unleash a flood of illegal immigration like the world has never seen.” That Biden’s campaign is a “cult” for open border “zealots.”

All of these are lies. While Biden has edged somewhat leftward on immigration, for instance supporting a limited expansion of procedural avenues to legal immigration and a temporary moratorium on deportations, Biden doesn’t support open borders, and his immigration agenda is largely a mainstream Democratic one.

Biden also supports largely maintaining current (pre-coronavirus) flows of legal immigration and legalization for undocumented immigrants, including for people brought here illegally as children (whose protections Trump tried to end). Those have broad majority support, so if that’s zealotry, a large majority of Americans are zealots.

And, of course, Biden supports rescinding Trump’s quasi-veiled Muslim ban, which should come up again in the context of the endorsement of Loomer.

And, once again, I wonder how much of a hot extremist mess the GOP convention will be. See this in the Daily Beast:

Over the last few U.S. presidential election cycles, the major television networks have chosen to broadcast just one hour each night from the respective parties’ political conventions, usually out of concern that anything more would impact viewership numbers and ad revenues.

But this year, another explanation was offered for keeping the broadcasts short: uncertainty over what airing President Donald Trump’s coronation event might look and sound like.

I’m anticipating a hastily assembled mashup of Leni Riefenstahl’s Nazi propaganda film Triumph des Willens (1934), D.W. Griffith’s The Birth of a Nation (1915), and every film Tim Burton ever made.

Multiple sources told The Daily Beast that when Democratic officials met with various broadcast network executives about their convention coverage plans, the executives stressed that they could not broadcast two hours each night in part because they then would have to give the same airtime to Trump, and all the wild unpredictability that might entail from an editorial perspective.

“We don’t know what that content is going to be,” was the line offered up, according to one source.

As I wrote yesterday, the Dems have been preparing for a virtual convention for several weeks. And so far, it’s gone very well. The Republicans didn’t commit to a virtual convention until July 23, less than a month ago. The networks still don’t know what the Republicans are going to put on the screen, other than the McCloskeys and the asshole kid in a MAGA hat who dissed the Native American Elder. It’s possible the Republicans still don’t know what they’re going to put on the screen. Maybe they’ll bring back Clint Eastwood and his chair.

I understand that ratings for the Dem convention are down a bit from 2016, which is a shame, but on the other hand convention videos are all over social media. So maybe the television ratings don’t matter. Historically, I believe the conventions really have impacted the elections. Past candidates have gotten as much as a 14-point bounce in the polls from their conventions. Whether the virtual conventions will have a similar influence remains to be seen.

There is no way the Republicans can top the Democrats’ roll call, especially the calimari guys from Rhode Island. Charles Pierce:

Let’s face it. The Democrats Over America Tour ’20 roll call on Tuesday night was a hit from the moment that Alabama kicked it off with Rep. Terry Sewell casting the state’s votes from the foot of the delicately illuminated Edmund Pettus Bridge. This may have been the greatest innovation in political conventions since the invention of papier-mâché. The roll call showed America in all its vast complications—its natural beauty, its popular diversity, its hope, its anger, and even its imperial pretensions. (I can’t be the only one who was moved by the poignant appeal of the delegates from the Northern Mariana to the rest of us not to inflict El Caudillo del Mar-a-Lago on them again because we can vote and they can’t. We’ve done enough damage to these folks already without that.) It’s hard to see how this doesn’t become a permanent fixture at these gatherings going forward. I can’t wait for next week when the Republicans cop this device, also beginning in Alabama, with Roy Moore standing outside the Gadsden Mall. 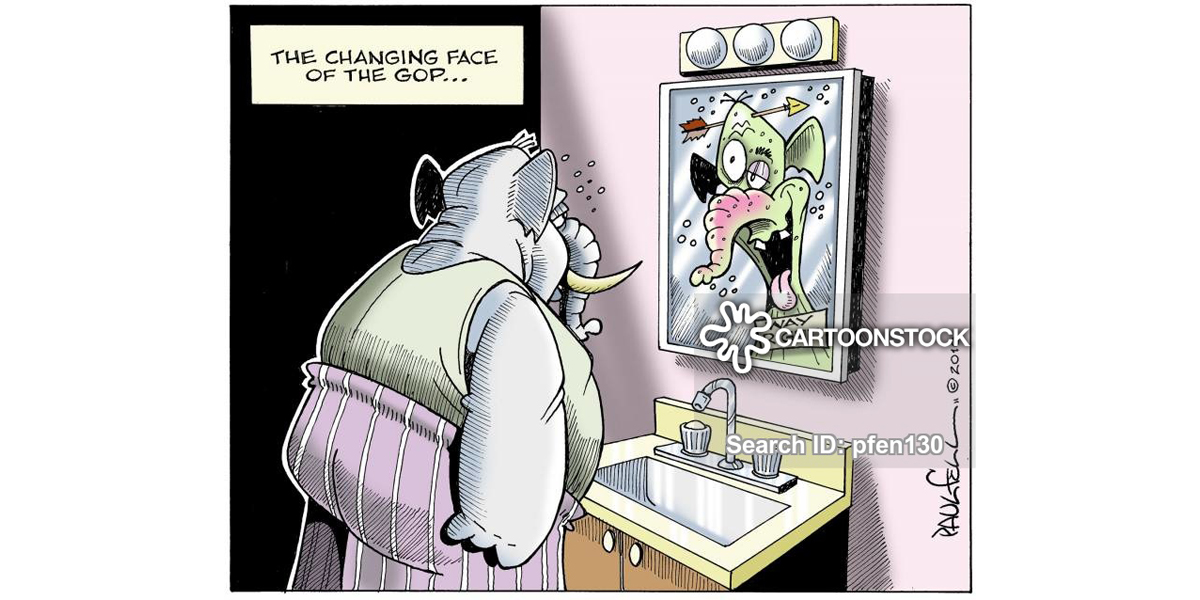 The changing face of the Republican Party

6 thoughts on “Conspiracies, Real and Imagined”