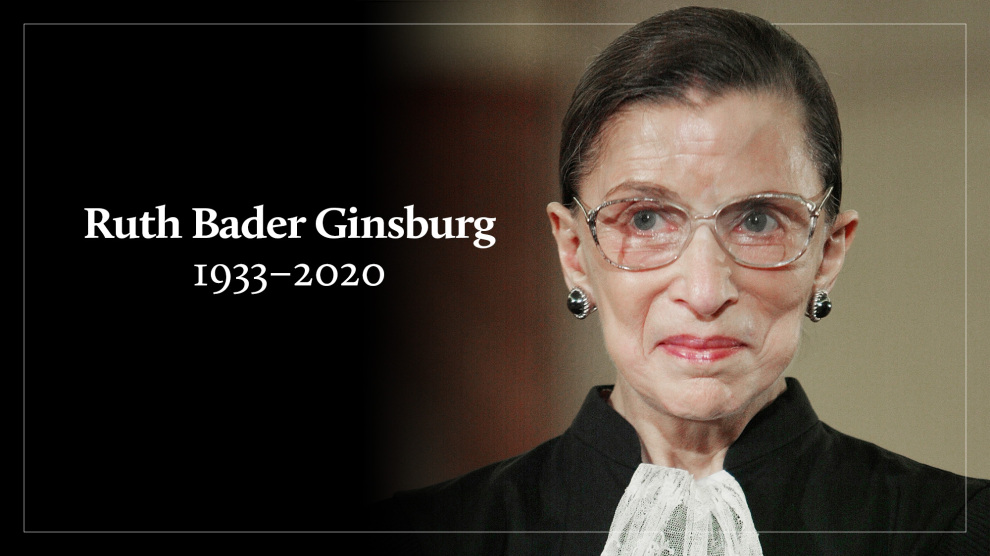 What a punch in the gut, huh? So what happens next?

David Frum writes that McConnell’s position may not be as strong as it appears. For one thing, Frum questions whether McConnell will have a majority vote. “McConnell cannot afford more than three defections in the face of what will certainly be united Democratic opposition to any last-minute Trump nominee,” Frum writes.

For a few Republican senators in tight elections, approving some right-wing nutjob to the Court now might ensure the end of their Senate careers. It’s possible Mitch would get his SCOTUS win at the cost of his majority. Frum continues,

The polls do not favor Susan Collins, Cory Gardner, or Thom Tillis—senators from Maine, Colorado, and North Carolina up for reelection this cycle. Yet these competitors may not be ready to attend their own funerals. They may regard voting against McConnell’s Court grab as a heaven-sent chance to prove their independence from an unpopular president—and to thereby save their own seats.

Lisa Murkowski of Alaska has also made skeptical noises, and even Lindsey Graham of South Carolina may flinch. He faces an unexpectedly tough race this year, and he is extra-emphatically on the record vowing not to support a Supreme Court confirmation vote in the later part of a presidential year.

See Lindsey Graham promising to not try to confirm a Supreme Court nominee during an election, below. However, Lindsey Graham has already gone back on his word, arguing that Merrick Garland’s nomination was different.

Michelle Goldberg thinks it is unlikely four current senators would vote against Trump’s nominee. If the confirmation vote isn’t taken until after the election, however, it’s possible that Mark Kelly — should he beat Martha McSally in Arizona — could be sworn in immediately, since McSally was appointed and not elected to the Senate. Note that it usually takes about 50 days for a Supreme Court nominee to be chosen and confirmed, which are fewer days that we have until the election.

Frum also says it might not be that easy to find a candidate willing to put herself in the eye of a political storm of the ages.

Can McConnell and Trump find an appointee willing to risk all that for the chance—but not the guarantee—of a Supreme Court seat? Specifically, can they find a woman willing to do it? The optics of replacing Ginsburg with a man may be too ugly even for the Trump administration. And if they can find a woman, can they find a woman sufficiently moderate-seeming to provide cover to anxious senators? The task may prove harder than immediately assumed.

See also Mark Joseph Stern, The Top Contender for RBG’s Seat Has a Fundamentally Cruel Vision of the Law.

Another argument from Frum seems farfetched to me. Frum thinks Trump may balk at shoving forward a nominee before the election if he sees that McConnell’s overreach is mobilizing Democrats and hurting his own election chances. I don’t think Trump is smart enough to see that. Edward-Isaac Dovere writes at The Atlantic,

The prospect of a conservative-heavy Court persuaded many Trump-wary conservatives to support him in 2016. This election, Ginsburg’s death will likely energize Biden-wary Democrats—millions of dollars have been raised online since news of her death broke last night—but Trump will also hope for an enthusiasm boost. He’ll aim to shift the conversation away from his mismanagement of the pandemic toward an ideological battle for the future of abortion rights and other contentious issues in American culture.

I honestly don’t think that will help Trump, because I don’t see culture wars winning over any voters who weren’t already in his pocket. But again, I don’t think he’s smart enough to see that.

The next option on the table will be possible only if Joe Biden wins the White House and the Dems take the Senate majority: Court packing. Michelle Goldberg:

And if Republicans do give Ginsburg’s seat to some Federalist Society fanatic, Democrats must, if they win back the presidency and the Senate, abolish the filibuster and expand the court, adding two seats to account for both Garland and Ginsburg.

This goes against Joe Biden’s instincts toward bipartisanship and national reconciliation. But if Republicans continue to ruthlessly bend the rules to establish the domination of the minority over the majority, only hardball tactics can restore democratic equilibrium. Republicans will shriek, but their brazen hypocrisy should justify such dramatic moves in the eyes of the public. They’ll be the ones who’ve annihilated whatever legitimacy the court has left.

The most immediate steps Democrats must take are killing the filibuster, adding states to the union and expanding the courts. …

… A federal court system in which the majority are appointees of popular-vote-losing presidents who then proceed to stymie all popular legislation enacted by a duly elected majority of legislators is both immoral and untenable. The balance must be rectified. There is nothing in the Constitution outlining the number of judges on any given court. Indeed, the Supreme Court has been expanded before.

Would this potentially create an arms race in which each unitarian majority government proceeded to expand the courts to govern however they please? Perhaps. But the danger to democracy and, frankly, to the country and the planet from allowing minority-rule theft of power to prevent any significant action on the country’s pressing problems would be far greater.

Will Joe Biden have the balls to do this? I do not know. He may need a lot of shoving. But it will have to be done.

See  also: Honoring a ‘superhero’ outside the Supreme Court.