So far in today’s Amy Barrett hearing that I’m not watching, Amy Barrett refused to answer yes or no to whether the Constitution gives a president unilateral authority to delay an election. (Hint to Amy: The answer is “no,” dear.)

Barrett, who clerked for Antonin Scalia of ambiguous memory, calls herself a “Constitutional originalist.” There’s a very good article at Vox by Ian Millhiser that explains originalism and why it’s a crock. Here’s the basic definition:

Originalism, in Barrett’s words, is the belief that “constitutional text means what it did at the time it was ratified and that this original public meaning is authoritative.” Judges, originalists maintain, should be bound by the words of the Constitution, and the meaning of those words should be determined solely based on how they were understood when they were added to the Constitution.

Now, I don’t think that’s necessarily a bad thing, up to a point. A lot of us lefties are somewhat originalist on the meaning of the Second Amendment, for example. However, taken to extremes it amounts to a tyranny of the dead. Originalism would shackle us to the perspectives and biases and knowledge of a small group of 18th century white men who couldn’t possibly have imagined the world we live in now or the problems we are facing now.

Further, I think it can be argued that the framers did not intend the Constitution to be that narrowly interpreted. “The meaning of much of the Constitution is vague and uncertain, and it was vague and uncertain when it was drafted,” Millhiser writes. This suggests to me that the 18th century white men who wrote it understood that they were creating a broad outline of government that gave future generations some flexibility to use it as they saw best. Indeed, there were enough disagreements among the attendees of the Constitutional Convention to create a lot of that vagueness, because they couldn’t agree on language that was more specific.

Indeed, in many areas we’ve gone so far beyond original understanding that there is no going back. Millhiser:

To give one rather stark example, there was a robust debate among early Americans about whether it is constitutional for the federal government to fund “internal improvements” such as roads and canals. As president, James Madison even vetoed an 1817 bill funding such construction because he deemed it unconstitutional.

Madison’s views are now widely rejected. But suppose that a Supreme Court dominated by originalists concludes that Madison was correct. Does that mean the entire federal highway system must be torn up?

Barrett has wrestled at length with the problem of precedent in her scholarship. “Adherence to originalism arguably requires, for example, the dismantling of the administrative state, the invalidation of paper money, and the reversal of Brown v. Board of Education,” she acknowledges in a 2016 article co-authored with scholar John Copeland Nagle. She also states in that piece that there are some past decisions that “no serious person would propose to undo even if they are wrong,” so Barrett appears to recognize that it would be irresponsible for an originalist judge to overrule every precedent they believe was wrongly decided.

But don’t underestimate what a radical wingnut is likely to do.

But there is much at stake if an originalist Supreme Court is not willing to stay its hand in the ways Judge Barrett suggests. To give one more example, Justice Clarence Thomas has argued, on originalist grounds, that his Court should consider reinstating long-dead doctrines that were once used to declare federal child labor laws unconstitutional. Thomas, at the very least, seems unlikely to restrain himself simply because most Americans won’t like the outcome of a particular case.

As it turns out, originalism potentially gives judges — or, at least, Supreme Court justices — tremendous discretion to decide whether to upend foundational legal principles that few Americans would care to see unsettled.

This is followed by a fascinating history of how various forms of originalism have gone in and out of favor in the Court over the years. You will not be surprised to learn that a lot of originalism has been applied to cases involving race. But let’s go on.

In the modern era, one case the originalists keep coming back to as wrongly decided is Griswold v. Connecticut (1965). In that case, the Supreme Court ruled that a state could not ban the use of contraceptives or birth control counseling for married couples. The court majority came to this conclusion by inferring a right to privacy from several amendments in the Bill of Rights. Conservatives freaked out over this; the “right to privacy” is a fiction, in their minds, that the authors of the Constitution did not intend. Even worse as far as they are concerned, Griswold was an important precedent to Roe v. Wade (1973).

So yesterday at the Barrett hearing, Senator Josh Hawley (R-Dark Ages) went on a rant that the Griswold decision amounted to anti-Catholic bias.

“I just heard my colleague Sen. [Chris] Coons make a reference to an old case–the Griswold case–which I can only assume is another hit at Judge Barrett’s religious faith–referring to Catholic doctrinal beliefs” Hawley said without providing any evidence whatsoever. “This is the kind of thing I’m talking about and this is the sort of attacks [sic] that must stop.”

Sen. Josh Hawley just said that merely mentioning the words “Griswold v. Connecticut” is anti-Catholic, in case you are wondering how this hearing is going.

Hawley is clearly part of the Louie Gohmert tradition of senatorial wackadoos.

I don’t know what the 18th century white guys would have thought of modern contraceptives that actually work, as opposed to the various ineffective methods used to prevent pregnancy in their day (“infanticide” is often listed as an early form of birth control). But this takes us to the problem of things that didn’t exist in the 18th century. I’m no legal scholar, but I don’t see anything in the Constitution that explicitly gives states the right to ban contraceptives. Aren’t the originalists just assuming a power that doesn’t necessarily exist? If we are going to infer, why not infer on the side of individual liberty, especially in matters that improve the quality of life?

Originalists claim that their way prevents judges from imposing their own biases on the text, but in practice it doesn’t seem to work that way. The originalists may pretend that they are above bias, but the truth is that there may be no such thing as an unbiased opinion, according to social psychology, except maybe within the hard sciences. The originalists may think they are not making decisions based on their personal values, but of course they do. They just lack the self-awareness to recognize their own biases as biases.

Consider another self-described originalist on the Court, Clarence Thomas. Just last week, Thomas wrote that the Court’s decision in Obergefell v. Hodges — which stops states from banning same-sex marriage — “created a problem.” A problem? What problem? I am not seeing a problem. Same-sex marriage is a fine thing. It’s not hurting anybody. What is the probloem?

Oh, here it is. Last week the Court refused to hear an appeal from Kim Davis, the infamous county clerk who refused to issue marriage licenses to same-sex couples and was sued. A lower court refused to grant Davis qualified immunity and said the suits against her could go forward. A majority of the SCOTUS justices didn’t want to mess with it and let the lower court decision stand. But Justices Thomas and Alito wanted to hear the case.

In a statement regarding the denial that was joined by Justice Samuel Alito, Thomas speculated that although “Davis may have been one of the first victims of this Court’s cavalier treatment of religion in its Obergefell decision,” “she will not be the last.” Davis’ “petition provides a stark reminder of the consequences of Obergefell,” Thomas wrote. “By choosing to privilege a novel constitutional right over the religious liberty interests explicitly protected in the First Amendment, and doing so undemocratically,” Thomas contended, “the Court has created a problem that only it can fix. Until then, Obergefell will continue to have ‘ruinous consequences for religious liberty.’”

Thomas and Alito would no doubt disagree, but all they are doing here is substituting their personal opinions for objective application of the law. Yes, it’s probably true that the Original Founding Guys would be apoplectic at the idea of same-sex marriage, but they’re dead now. They don’t get to tell us what to do. Most living Americans are fine with it.

Kim Davis could have satisfied her religious beliefs simply by turning the responsibility for issuing those marriage licenses over to someone else in her office so that she wasn’t doing it personally. Pharmacists who don’t want to fill contraceptive presciptions can let a co-worker do it. Ambulance drivers who refuse to transfer patients in pain to an abortion clinic — well, may they need a new career.

I think a majority of Americans would agree that a person’s private religious beliefs and practices don’t give that person carte blanche to stomp on the rights and well being of others. If something about your religious tradition puts you at odds with most of society, in most circumstances it’s up to you to figure out how to manage to practice your religion without causing problems for others.

Further, privileging religious doctrines over the rights of homosexuals is nothing but bias. There is no fine and high-minded legal perspective that makes it otherwise. Masha Gessen, The New Yorker:

In his four-page statement from Monday, Thomas did not appear to argue that the Court should change its view of marriage itself: marriage remains a fundamental right, a right essential to being human. Yet Thomas maintains that the right of same-sex couples to marry does not exist: he calls it “atextual” and “novel.” In his dissent in Obergefell, Alito, who was joined by Thomas and the late Antonin Scalia, accused the Court of “inventing” the right to same-sex marriage. Hannah Arendt once observed that the concept of human rights was limited by the ability of people to gain membership in a political community that would recognize the humanity from which their basic rights followed. By saying that the right to marriage is fundamental but does not accrue to same-sex couples, Thomas is making a case to expel L.G.B.T.Q. people from the American political community.

I don’t think that LBGQT rights can be shoved back in the box now, Justice Thomas. We’ve come too far. Time to adjust, dude.

The originalist perspective makes me wonder what they think a Constitution is for. It’s supposed to have set up a framework by which We, the people can govern ourselves. Originalists want to take power from living people and give it to the dead. But even that is a fiction, because the truth is that originalists are just using “textualism” as a means to impose their own biases and values on the law. There is no legal document, including the Constitution, in which every clause can only possibly be interpreted one way. It’s bullshit, in other words.

Contrary to the natural sciences, legal interpretation is not an empirical effort but a continuous dialogical process between the interpreter and the text.

Not all of us agree on how a word should be understood, much less for purposes of defining its legal consequences. Bostock v. Clayton County (2020), for example, is noteworthy among other reasons for the sharp disagreement between the majority opinion written by Justice Neil Gorsuch and the dissent written by Justice Samuel Alito on how best to interpret the word “sex discrimination” for purposes of Title VII of the Civil Rights Act. Even among strict constructionists, meaning has different meanings. 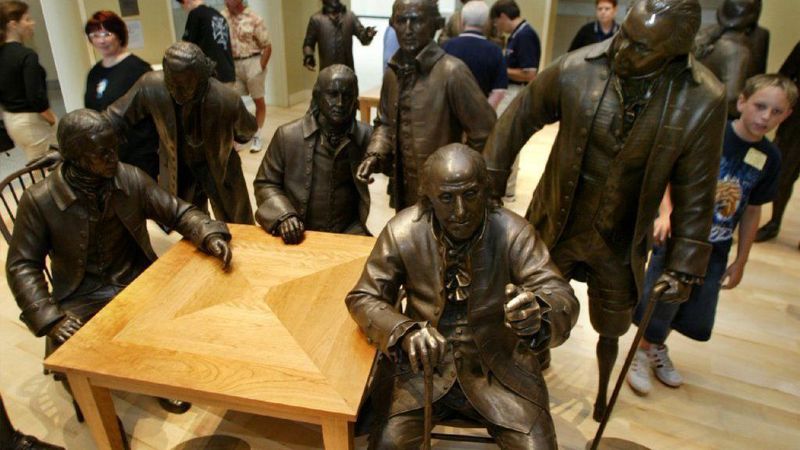 The National Constitution Center in Philadelphia has a room with life-size bronze statues of the Founding Guys that you can walk around and touch.

14 thoughts on “A Tyranny of the Dead”