There is much speculation that the Supreme Court, especially with Amy Barrett on it, will gut or overturn the Affordable Care Act. The challenge to the ACA is scheduled to be heard on November 10. The legal issues involved in the challenge give me a headache, frankly, and I have no idea what the Court might do.

What I do know is that if the ACA is overturned, the insurance companies are no longer constrained from refusing to cover people with preexisting condtions (or “a medical history” in more civilized countries). What I also know is that Republicans have no clue what they might replace the ACA with to keep people with medical histories covered.

Local television is swamped with candidate ads right now, and nearly all of them at least mention health care. Some of them are entirely about health care. Ads from Democratic candidates, especially for the U.S. House, often accuse their Republican opponents of voting to take health care away from people with preexisting conditions. I assume this means the Republican opponent, usually an incumbent, at some point voted against the Affordable Care Act or supports the suit challenging it. (My senators, unfortunately, aren’t up for reelection.)

The Republican incumbents then release their own television ads in which they quiver with indignation that they are being accused of wanting to take health care away from people with preexisting conditions. My goodness, why would anyone accuse them of such a callous thing? But, of course, they never explain how such coverage might be restored if the ACA is overturned.

One such speciment, Rodney Davis (R-IL; the local teevee runs ads for both Missouri and Illinois politicians) is running an ad in which his wife tearfully explains that she has a preexisting condition and her children might have inherited it and it’s just so unfair that her husband’s Democratic opponent (Betsy Dirksen Londrigan) claims he would take health care away from people with preexisting conditions. Here is the ad:

I checked Davis’s record. Yes, in 2017 he voted to overturn the Affordable Care Act. I checked his web page. No, he doesn’t explain what he’s going to offer the private insurance companies to get them to agree to cover people with preexisting conditions. So Mrs. Davis is just spewing bullshit. It’s very sincere bullshit, but bullshit nonetheless.

(In case any righties read this and need this explained to them: Private for-profit insurance companies can only stay in business if most of the people paying premiums do not need expensive medical care. For that reason, insurance companies are reluctant to issue new policies to people who look like they’re going to need care that will cost the company a lot of money. Further, if they can’t deny coverage to such people, what’s to stop everyone from waiting until they get sick to buy an insurance policy? And then the private health insurance business model fails, and the insurance companies all go belly up.

This page from the Kaiser Family Foundation explains how the ACA worked out the problem:

The ACA included both a carrot and a stick to encourage currently healthy people to buy insurance. The stick was the individual mandate penalty, which has since been repealed. The carrot is the current subsidy provided to low and middle income people. Providing comprehensive pre-existing condition protections without some similar mechanism to create a balanced insurance pool would cause premiums to increase substantially and result in an unstable market.

In other words, it might be that after the ACA the insurance companies will continue to offer policies to people with preexisting conditions, but without substantial government subsidies the cost of that insurance will be way too high for most people to pay. So fat lot of good it will do them.

And among all the zombie ideas about health care Republicans have promoted over the years in lieu of a comprehensive health care plan, there is absolutely nothing that honestly addresses this problem.)

Every time I see one of these ads I want to tie the Republican candidate to a chair, shine a light in his face and grill him mercilessly about HOW he is going to guarantee health care to people with preexisting conditions. What is your plan, dude? And if they don’t have a plan, it’s perfectly legitimate for their Democratic opponents to say that they are trying to take health care away from people with preexisting conditions. Because they are. That’s just plain fact. They may pretend even to themselves that’s not what they are doing. But that’s what they are doing.

A few days ago Paul Waldman wrote a column about the secret Republican health care plan.

It’s true, as Democrats insist, that there is no Republican “plan,” if like some kind of nerd you define it as a series of specific steps written down somewhere that lay out a health care policy that will be followed by the government and the country.

But in another sense, Republicans actually do have a plan. It’s not the kind of “plan” that involves legislation or regulations. Here’s what it is: Nothing.

Waldman argues that ending the ACA without a replacement would be a catastrophe for the Republican Party, because the consequences would be terrible. Millions really would lose their health care. People with preexisting conditions would be unable to get coverage again.

Yet, at the same time, they’ve badmouthed the ACA for so long that their voters, who have no clue what they are asking for, demand that the Republican Party oppose it. So the plan is to publicly oppose it while hoping like hell it is never overturned.

Which is why all smart Republicans also want to lose the lawsuit against the ACA that the Supreme Court is scheduled to hear just after the election, just as they lost that 2017 vote. Which they just might, since at least some of the conservative justices — such as Chief Justice John G. Roberts Jr. and Justice Brett M. Kavanaugh — are smart enough to know how dangerous it is for their party.

Poor dopey Republican voters simply accept on face value that nothing awful would happen if the ACA is voided. And they are too stupid to understand that Donald Trump can’t just sign an executive order that people with preexisting conditions must be covered, and that fixes everything. Greg Sargent, a couple of weeks ago:

Two reporters for the Upshot talked to numerous Trump voters and found that their faith in his intention to protect preexisting conditions was rock-solid. …

…“I’ve heard from him that he would continue with preexisting conditions so that people would not lose their health insurance,” one Florida woman told the Upshot of Trump. Her husband has a heart condition.

“I still think he has everybody’s best interest at heart,” a Georgia woman added. “I just cannot see him allowing for preexisting conditions to come back.” She has a son with schizophrenia.

But this bit from the Upshot piece was most revealing:

“There is not a single guy or woman who would run for president that would make it so that preexisting conditions wouldn’t be covered,” said Phil Bowman, a 59-year-old retiree in Linville, N.C. “Nobody would vote for him.”

And that’s why Trump, and Republicans around the country, are denying loudly that they will take health care away from people with preexisting conditions, even though the policies they want to enact would do exactly that.

Trump is benefiting from a perverse dynamic: He isn’t being held accountable — at least by many of his voters — for not offering an actual plan to replace the ACA precisely because wiping out the ACA’s protections, and not having any plan to replace them, seems politically unthinkable to them. And that enables him to politically get away with it — among those voters, anyway.

And down-ticket candidates like Rodney Davis are trying to pull the same scam.

It’s unfortunate that the ACA challenge won’t be heard by the SCOTUS until after the election. And if Trump loses the election and the ACA goes down, his dimwit groupies will assume they’ve lost their health care because Trump lost the election.

On the other hand, if Dems take the Senate and White House and the ACA goes down, this could push even Joe Biden to accept something a lot closer to single payer next time. 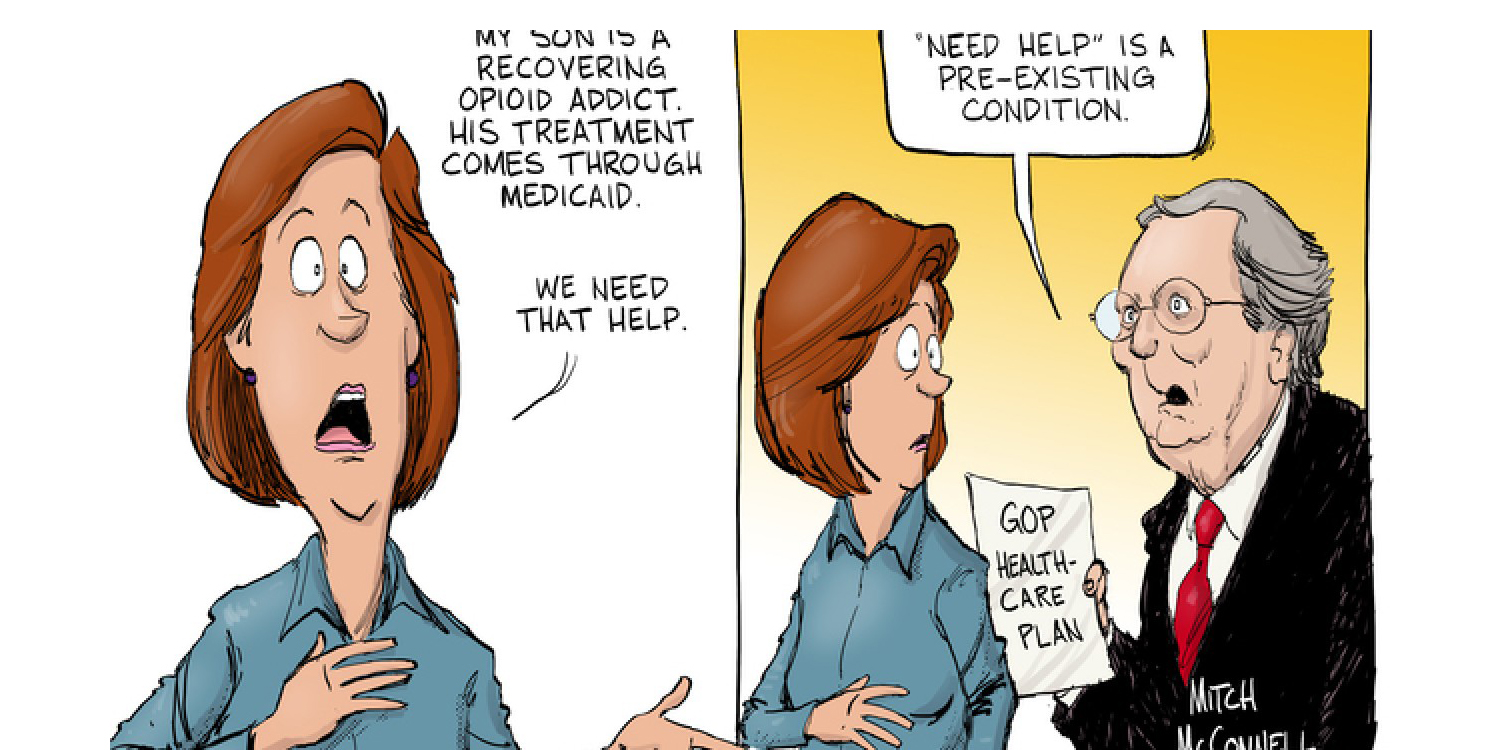