The nation’s editorial pages are full of SCOTUS commentary today. Here is a sampler.

Let’s start with the New York Times, which is running a Supreme Court special section of op eds headlined How to Fix the Supreme Court.  Emily Bazelton’s How We Got Here is worth reading. She describes several times in past history in which the Supreme Court was smacked down by the other branches. For example, the number of justices was increased to nine (in 1869) by Congress in anticipation of their interference with Reconstruction. Bazelton continues,

The most pressing question now is whether the conservative majority will issue rulings on voting, the census, redistricting and other foundations of fair and free elections that threaten the majoritarian nature of American democracy itself. If the conservative justices take these steps, they will entrench the power of the Republican Party that gave them their seats just as an increasingly multiracial electorate shifts away from the current Republican coalition.

Even now, Republican dominance over the court is itself counter-majoritarian. Including Amy Barrett, the party has picked six of the last 10 justices although it has lost the popular vote in six of the last seven presidential elections, and during this period represented a majority of Americansin the Senate only between 1997 and 1998 (if you count half of each state’s population for each senator).

That’s a dangerous proposition for our constitutional order. The court can hold its conservative impulses in check with an eye to the future. Or it can ramp up a power struggle with the other branches that in the end — Marbury or no Marbury — it is destined to lose.

Liberals say that if Joe Biden wins the election, Democrats should answer by adding justices to the Supreme Court. Republicans respond with faux outrage that this would politicize the judiciary. But they have already politicized the judiciary. The question is whether only one side should play that game. Besides, not only is enlarging the Supreme Court legal, its size has changed seven times over its history.

Adding judges would be a political response to a political act. But the extremes to which Republicans have been willing to go leave the Democrats no other choice. Not for revenge or because turnabout is fair play, but as the only way back to a less politicized process.

This is a lesson we learned decades ago from economists and game theorists: Once cooperation breaks down, the only play to restore it is tit-for-tat. It’s the only way both sides can learn that neither side wins unless they cooperate.

Another fix Kramer suggests is to choose a new justice with each Congress, and the nine most recently appointed justices would be the ones to hear cases. The older justices would still be on the Court and could fill in when a current judge is unavailable. This is a way to put in term limits that would not require a constitutional amendment.

Kent Greenfield, a professor at Boston College Law School, suggests creating a new court that would deal with constitutional questions.

The most contentious and important legal issues — whether states can ban abortion, or whether the president can refuse subpoenas or mandate travel bans — should be shifted from the Supreme Court to a new court created to decide such issues….

… This court would be made up of judges from other federal courts, selected by the president from a slate generated by a bipartisan commission to create legitimacy and balance. The judges would serve limited terms, then return to their previous courts. Staggered terms would guarantee each president several appointments.

At Washington Monthly, see Garrett Epps, Independent Judiciary, RIP.  “If We the People accept without serious reform this new marsupial court as it is being contemptuously thrown to us, we do not deserve self-government.”

At the Washington Post, see Paul Waldman, There’s no more doubt: Democrats have to expand the Supreme Court.

Keep this image in your mind: Justice Amy Coney Barrett, standing with President Trump on a balcony at the White House, smiling in satisfaction as the crowd below them whoops and hollers with joy after Barrett was sworn in to the Supreme Court.

Barrett no longer needs to pretend that she’s anything other than what she is: a far-right judge, installed on the Supreme Court by a president who got fewer votes than his opponent and confirmed by a Republican majority that represents fewer voters than their Democratic colleagues, whose job it will be to do everything in her power to maintain minority GOP rule while carrying out a conservative judicial revolution.

That picture of Barrett and Trump reveling in their mutual triumph was so vivid that the Trump campaign literally turned it into an ad for the president’s reelection. A different person might have said, “Mr. President, it wouldn’t be appropriate for me to participate in such a nakedly political event.” But Barrett wasn’t concerned. She didn’t shout “MAGA 2020! Suck it, libs!” but she might as well have. 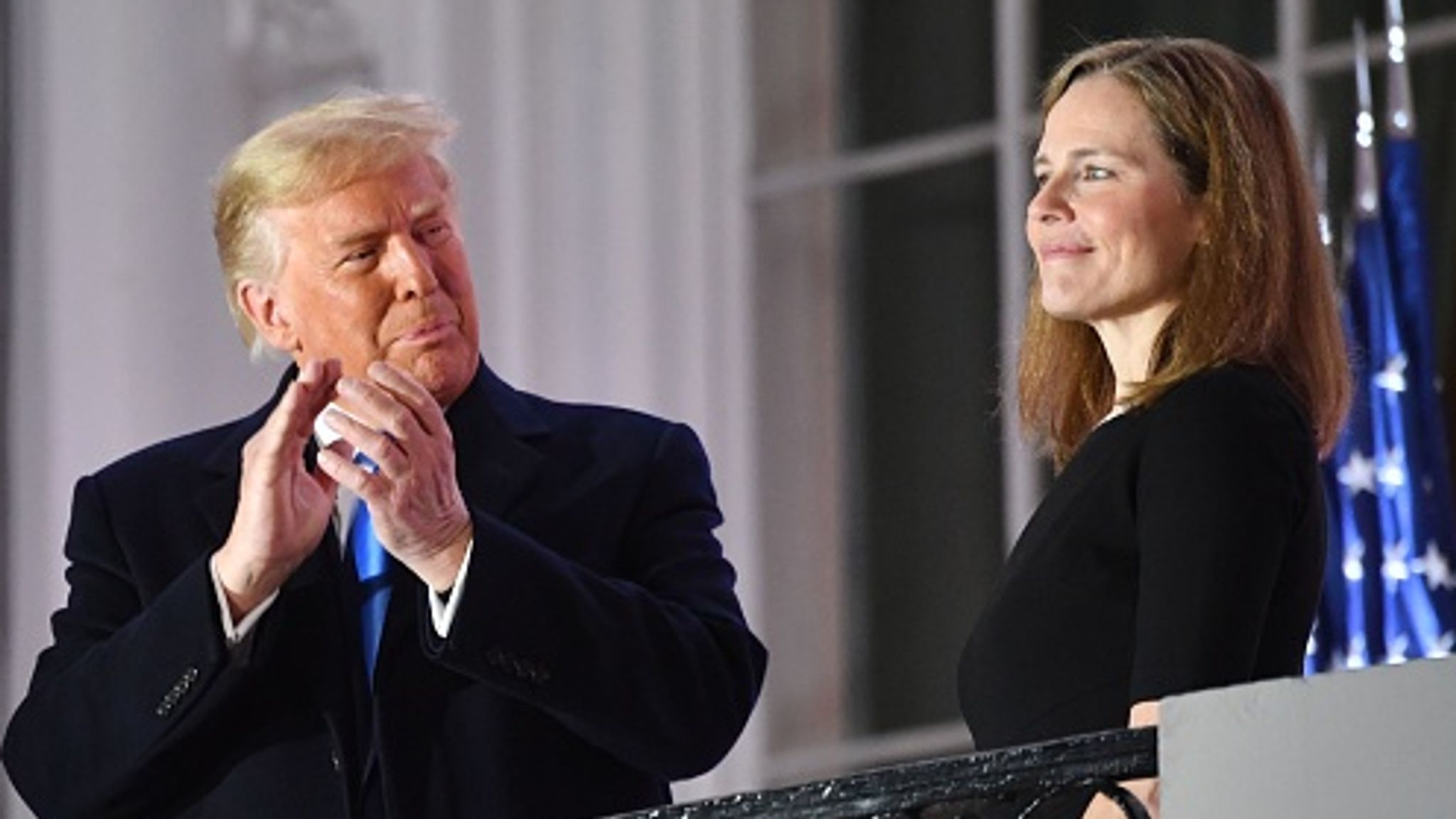 Trump and Barrett after Barrett’s swearing-in at the White House.

“A lot of what we’ve done over the last four years will be undone, sooner or later, by the next election,” he [Mitch McConnell] said Sunday about Barrett’s nomination. “But they won’t be able to do much about this for a long time to come.”

But they can, and they should, no matter how much Republicans whine about it. If voters give them the White House and the Senate, they’ll have the legal right and the moral obligation to do so. Without it we won’t have a real democracy.

Of course, people are asking if Joe Biden has the cojones to expand the court. I don’t know, but a Democratic-controled Congress wouldn’t have to wait for Joe Biden. Congress could pass a bill for Biden to sign, and I believe he would sign it.

Other commentary from WaPo:

At Talking Points Memo, Josh Marshall writes See the Corrupt Court for What It Is. This is a members-only article, so I’ll quote a bit.

If you needed to know anything more about Amy Coney Barrett – I didn’t, but if you did – she made her first act last night appearing at a splashy campaign event for President Trump. Once the Senate voted to confirm her on a party line vote, she had a lifetime appointment and literally no need for anything from President Trump. Indeed, she would quite likely have marginally improved the odds that the corrupt conservative Court majority would remain in place by declining such an appearance.

She did it anyway and that was a choice.

Meanwhile, Justice Kavanaugh, himself a former Republican political operative rinsed and rebranded as a High Court Justice, issued another ruling to restrict voting access in the current election. Critically and ominously he added what amounted to a threat to use the Court to block vote counting after election day or mail-in votes altogether. Kavanaugh laundered Trump’s tweet threats into SCOTUS-ese. But the message was the same. He aped the Trump’s line about “chaos” and uncertainty if there’s no definitive result on election night even though the election night result is purely a function of election calls by media organizations. No states publish or certify election results on election night. It always takes days and usually weeks to do.

We all understand that we’re used to knowing who won on election night and we’d all like this to be done. But Kavanaugh’s gambit highlights the fact that knowing the results on election night or halting the counting of votes on election night is purely a figment of press schedules and cannot have any legal or constitutional standing. He is simply part of the greater Republican corruption and its increasingly open program to use the power and legitimacy of the Supreme Court to engineer Republican election victories even its candidates can’t muster the most votes. It is a corrupt program; it is a corrupt Court.

Republicans look to the Supreme Court as a firewall for their agenda. Conservative advocacy groups spent millions on swing-state ads meant to pressure Republican senators, points out James Wallner, a Republican former senior Senate staffer and current fellow at the R Street Institute. “It’s nonsense to suggest it’s not supposed to be political,” he told me.

Even after four years of controlling the Senate and the White House, along with two years of holding the House of Representatives, “Republicans don’t have a lot to show for [themselves],” Wallner said. “Confirming Barrett right before Election Day is a continuation of a trend: We have to do something.” In the absence of major legislative achievements, he said, the judiciary has become an arena where Republicans, the party of small government, look to entrench their power. The party’s instinct “is not to check the Court. It’s to control the Court,” Wallner said.

Originalism is an intellectual cloak drummed up (somewhat recently) to dignify a profoundly retrogressive view of the Constitution as a straitjacket on the ability of the federal government to act on behalf of the public. Its real purpose is to justify a return to the legal environment of the early 1930s, when the Court routinely struck down essential elements of the New Deal. Business regulation, Social Security, and Medicare? Not so fast. The Affordable Care Act, environmental protections, a woman’s right to choose? Forget it. And this despite the Constitution’s preamble, which states that one of its basic purposes is to “promote the general welfare.”

I wrote my own opinion of originalism a few days ago; see A Tyranny of the Dead.

Expanding the Supreme Court and other federal courts may be just the beginning, but I don’t think there’s any question it has to be done. To re-quote Garrett Epps from above, “If We the People accept without serious reform this new marsupial court as it is being contemptuously thrown to us, we do not deserve self-government.”

13 thoughts on “What Will We Do About the Supreme Court?”