[Note: For stupid technical reasons that were not my fault the blog had to revert to an earlier copy of itself before I wrote this last post. I have a copy, so here it is again.]

Some time last week in all the teevee election commentary, I remember someone said that Trump won parts of the upper Midwest where the covid rates were highest. And this was said in a tone of wonder and disbelief, because of Trump’s incompetent response to the pandemic. But of course that makes sense; it is because those precincts are full of Trump voters that the covid rates are high there.

The gap didn’t use to be so extreme:

And here’s the part that tells us something, although I don’t know what exactly.

A Washington Post analysis of Labor Department data found counties that suffered economically under Obama’s second term flocked to the Trump in 2016, while prosperous counties moved toward Obama’s Democrat successor, Hillary Clinton. Contrast that with 2020, when the gaps were smaller, but Joe Biden saw the biggest shift in his favor in counties that saw the fastest job growth in the four years of the Trump presidency. Meanwhile, the largest shift to Trump in 2020 came from counties that saw the least job growth over his term. (Calculations are based on annual averages, and only use data through March 2020, the most recent month available.)

Why would it be true that counties that suffered the most economically during Trump’s tenure would be the ones with the biggest support for Trump? I would love to see data from those same counties to find out if those same voters believe Trump has been good for the economy, and if they believe they are better off now than four years ago, even thought he isn’t and they aren’t. And is there also something about those counties that makes them more impervious to economic growth (like, low education rates)? Maybe the reason those counties have low job growth is that most of the residents are MAGA heads.

Just for fun, let’s look at the latest covid map from the New York Times. 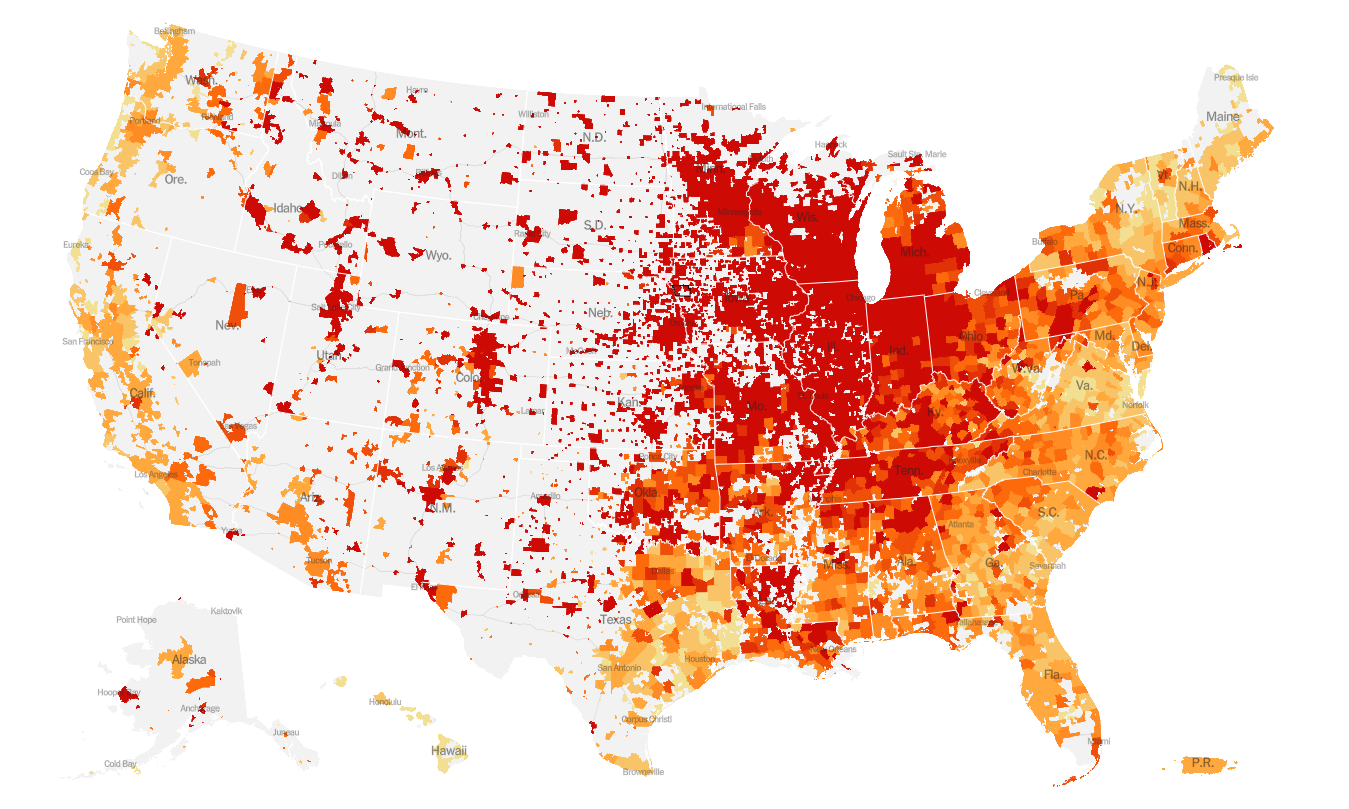 USA Today, Nov. 14: The Dakotas are ‘as bad as it gets anywhere in the world’ for COVID-19. You might not know that from the map, because on the covid map the Dakotas are mostly white with dark red splotches. I assume the red splotches are  where all the hospitals are.

It may be that at some point in the future the population trend will reverse. Technology is making it less necessary for all employees to go in to the same office. Maybe people will choose to move away from cities if they can telecommute most of the time. Better mass transportation would help, too. Someday.

Anyway — to the question of whether the country can be united and the gaps closed, in the short term I don’t think so. There is no working with people in denial of reality. How much the country was ever united is questionable. In the past it wasn’t so much united as dominated by the white and affluent part of the population. Now we’re finally trying to blend more people in, really for the first time, and it’s bumpy.

Trump’s supporters are nursing humongous grievances, obviously. They are angry. They blame far-away “elites” for their problems. They feel entitled to a life they are not getting, and they think it must be because someone less deserving has butted into the line ahead of them. They feel very, very alienated from the larger, national culture in which they live. I’ve written in the past about why alienated people turn to dictators and fall into cults of personality; see:

I could go back a few more years. The point is that this doesn’t have anything to do with what we might call objective reality. Trump supporters may be our neighbors, but in truth they are living on a different planet, and I don’t know what it’s going to take to bring them back to this one, assuming they were ever here.

I predict the focus on Trump will fade away eventually. He’ll be very diminished once he has left office, and I don’t think anyone is going to step into the Il Duce role right away. Eventually, maybe. David Frum:

Since the election, some of Trump’s supporters have begun to ponder pursuing a “Trumpism without Trump,” crafting a Trumpist ideology severed from Trump’s self-harming personality and grudges.

There are at least two big problems with this concept.

First, it’s not at all clear that such a thing as Trumpism exists, apart from Donald Trump’s own personality and grudges. Subtract Trump’s resentments and the myth of Trump the business genius and what’s left? Are immigration restriction, trade war with China, and blowing up NATO really such compelling concerns? Are those goals what energized 71 million Americans? Would they energize voters to support Tom Cotton, Dan Crenshaw, Josh Hawley, or Marco Rubio? That seems unlikely. And while there are potential contenders for the resentment vote—the cable host Tucker Carlson, Trump’s son Don Jr.—they cannot offer the myth of business success. Worse, they overdo the resentment. That’s fine for carving out a cable-TV or Facebook-based business. But if resentment didn’t work politically for George Wallace in 1968, it’s not going to work for George Wallace knockoffs in 2024.

It was never about policy. It was never about making good on his campaign promises, since he didn’t. It was about giving voice to rage and permission to act out about it. That’s what Trump did for people. That’s why they love him. And that’s the only reason. Trumpism is nothing but a cult of personality. Trump and Trumpism will fade, but I don’t see that rage and resentment and alienation going away.

4 thoughts on “Can This Country Be United? Was It Ever?”