Although we’re going to be living with his zombie supporters for awhile, all signs point to Trump being a washed-up has-been once the clock strikes noon on January 20.

As President Trump prepares to leave office with his party in disarray, Republican leaders including Senator Mitch McConnell are maneuvering to thwart his grip on the G.O.P. in future elections, while forces aligned with Mr. Trump are looking to punish Republican lawmakers and governors who have broken with him.

The bitter infighting underscores the deep divisions Mr. Trump has created in the G.O.P. and all but ensures that the next campaign will represent a pivotal test of the party’s direction, with a series of clashes looming in the months ahead.

The friction is already escalating in several key swing states in the aftermath of Mr. Trump’s incitement of the mob that attacked the Capitol last week. They include Arizona, where Trump-aligned activists are seeking to censure the Republican governor they deem insufficiently loyal to the president, and Georgia, where a hard-right faction wants to defeat the current governor in a primary election.

We’ll have to see how that plays out. But the money is going to stay with the establishment, which also has more hands on the levers of government. The Trumpers have guns, flags, and pickup trucks. I think the Trump takeover of the Republican party will eventually fizzle away.

Trump himself is going to have bigger things to worry about than politics. See Jonathan Chait, Trump Is on the Verge of Losing Everything.

One crisis, though the most opaque, concerns Trump’s business. Many of his sources of income are drying up, either owing to the coronavirus pandemic or, more often, his toxic public image. The Washington Post has toted up the setbacks facing the Trump Organization, which include cancellations of partnerships with New York City government, three banks, the PGA Championship, and a real-estate firm that handled many of his leasing agreements. Meanwhile, he faces the closure of many of his hotels. And he is staring down two defamation lawsuits. Oh, and Trump has to repay, over the next four years, more than $300?million in outstanding loans he personally guaranteed. …

… If this were still 2015, Trump could fall back on his tried-and-true income generators: money laundering and tax fraud. The problem is that his business model relied on chronically lax enforcement of those financial crimes. And now he is under investigation by two different prosecutors in New York State for what appear to be black-letter violations of tax law. At minimum, these probes will make it impossible for him to stay afloat by stealing more money. At maximum, he faces the serious risk of millions of dollars in fines or a criminal prosecution that could send him to prison.

He’s talked about starting a media company, but that takes work, and it’s hardly a guaranteed money maker. And then there is the real possibility of criminal conviction.

The assumption until now has always been that Trump wouldn’t really be convicted of crimes or sentenced to prison, despite the fairly clear evidence of his criminality. American ex-presidents don’t go to jail; they go on book tours.

That supposition wasn’t wrong, exactly. It rested on the understanding of a broad norm of legal deference to powerful public officials and an understanding of the dangers of criminalizing political disagreement. But what has happened to Trump in the weeks since the election, and especially since the insurrection, is that he has been stripped of his elite impunity. The displays of renunciation by corporate donors and Republican officials, even if they lack concrete authority, have sent a clear message about Donald Trump’s place in American society.

Indeed, the Republican establishment would probably support — tacitly, of course — throwing Trump in jail. It would shut him up and get him out of their hair.

At noon on January 20, Trump will be in desperate shape. His business is floundering, his partners are fleeing, his loans are delinquent, prosecutors will be coming after him, and the legal impunity he enjoyed through his office will be gone. He will be walking naked into a cold and friendless world. What appeared to be a brilliant strategy for escaping consequences was merely a tactic for putting them off. The bill is coming due.

The real question is what will happen to the QAnon Cult? I think cult followers are more likely to somehow fold a ruined and jailed Trump into their evolving mythology than to give it up. But David Atkins thinks the cult can’t survive without Trump.

The QAnon conspiracy theory contains many elements that have long pervaded far-right beliefs: Satanic panic, anti-Semitic blood-libel, Illuminati control, a new Great Awakening, and similar notions. But what makes QAnon unique–beyond its distribution via the modern message board and social media technologies–is its focus on a single man: President Donald Trump. In Q world, Trump is the Messiah, the God-Emperor, the infallible 5-D chessmaster who knows all and can do no wrong. For them, he is standing in the way of a fallen world dominated by child-sacrificing Satanist communist cannibals addicted to adrenochrome, the one person who will bring about a new world order in which all debts are wiped clean, free energy is released. The Cabal that has been holding humanity back is exposed and executed in secret military tribunals.

But all of this depends on Trump’s remaining president. In some sects of QAnon, it is believed that enough Americans must be “red-pilled” to create society anew once the shock of “the Storm”–in which their enemies are destroyed–has arrived, fulfilling the function of Q. In others, Trump is so totally in control that they are all simply “watching a movie”–the more dramatic, the better–depicting a historic transition unseen (in their worldview) since the time of Jesus.

QAnon is thus not just a conspiracy-theory cult like many in the history of the American right, but a cult of personality and a cult of power. Cults of power are closely associated with the worst authoritarian regimes globally and require significant cognitive gymnastics. The Great Leader is indomitable and infallible but also beset by insidious enemies both within and without. As Umberto Eco famously wrote of fascist ideologies, “The enemy is both strong and weak. By a continuous shifting of rhetorical focus, the enemies are at the same time too strong and too weak.” So it is with Trump: simultaneously, the smartest and strongest saint ever give up his billionaire lifestyle to save the world but also opposed by the greatest forces in evil in human history.

Prophetic cults tend to survive when their prophecies are proved wrong, such as if the world doesn’t end or the Messiah doesn’t arrive on schedule . The prophecies are simply adjusted. But cults of power tend to evaporate when the leader falls, Atkins writes.

But Atkins also quotes a QAnon expert who thinks that the cult can survive without Trump. They’ll still believe in the Satanic forces stuff, just not in Trump. Without a singular focus on one person, however, I question if they will remain a political force. Some other God-Emperor would have to step into his place, and I can’t think of anyone who could pull that off. 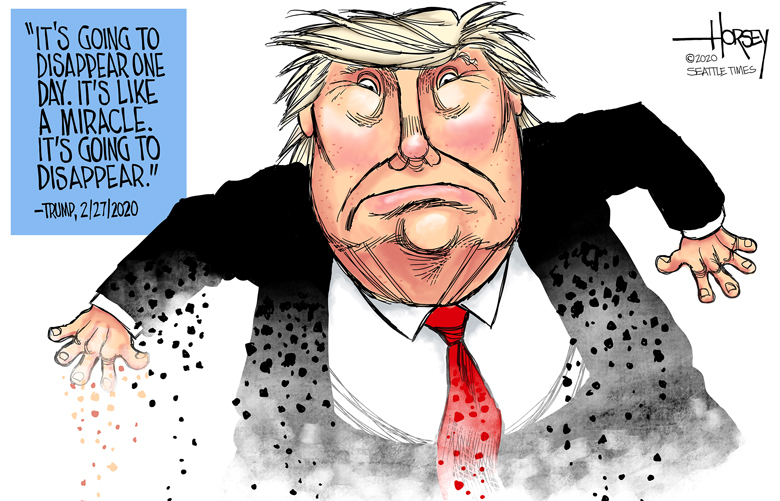 4 thoughts on “The Twilight of the Trump”