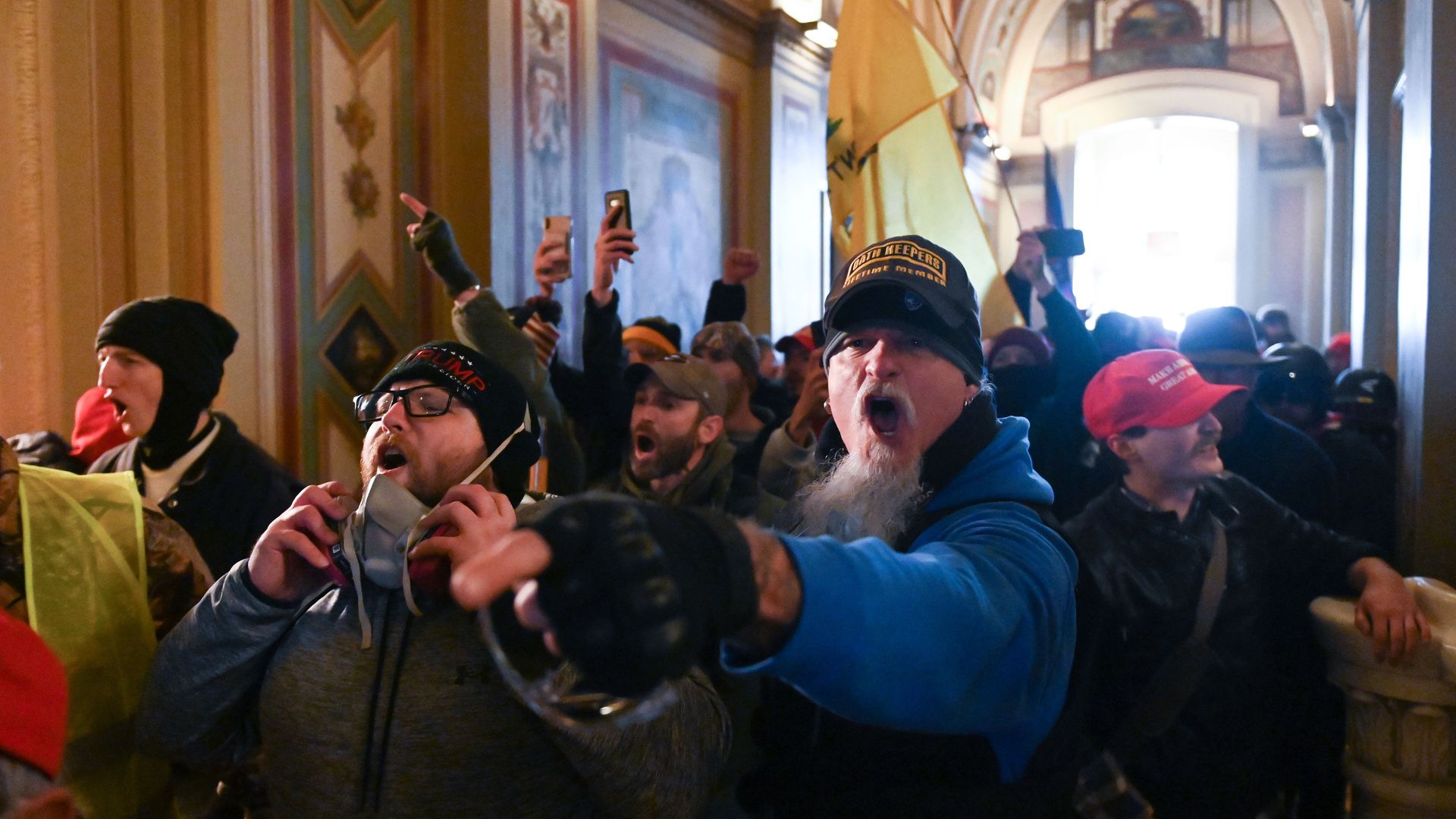 DHS has issued a warning of a “heightened threat environment across the United States” from “ideologically-motivated violent extremists with objections to the exercise of governmental authority and the presidential transition, as well as other perceived grievances fueled by false narratives.” Trumpers and right-wingers, in other words.

No doubt every rightie in media, social and otherwise, will start screaming that the Biden Administration is unfairly targeting them.

Some elements in DHS have unsuccessfully tried to warn us about the danger of right-wing extremism for years, of course. Remember this one?

In April 2009, federal intelligence officials issued a prescient warning to police departments around the country.

“Right-wing extremists will attempt to recruit and radicalize returning veterans in order to exploit their skills and knowledge derived from military training and combat,” experts in the Department of Homeland Security wrote. “These skills and knowledge have the potential to boost the capabilities of extremists — including lone wolves or small terrorist cells — to carry out violence.”

It was one of DHS’ most explicit mentions of homegrown terrorists since 9/11, one with a direct connection to the military.

But the call to action was effectively buried after powerful Republican politicians and their allies in the right-wing media launched broadsides against President Barack Obama’s administration and Democrats, alleging that they had disrespected the men and women in the U.S. military while attempting to surveil and silence conservatives. The blowback shifted the debate away from how to actually address the threat and into another partisan public spectacle.

In the years since, every time someone proposes that there’s a threat of violence from right-wing groups, that person is shouted down. So let’s see what happens this time. But the 2009 report was prescient. Since the January 6 Capitol insurrection, news stories about the number of cops and ex-military who were among the insurrectionists have spread throughout the land, to the surprise of absolutely no one who’d been paying any attention at all.

It’s also the case that many people involved in national security are inclined to give righties a pass. For example, Iveta Cherneva at Salon discusses FBI Deputy Director David Bowdich, who will be retiring soon.

In the spring of last year, when I was a candidate for the office of UN special rapporteur on freedom of speech, Bowdich was quoted, in a memo leaked to the New York Times, reacting to the nationwide wave of Black Lives Matters protests. Bowdich maintained that the protesters should be arrested under an outdated racketeering law from the 1940s. The leaked memo showed that Bowdich considered the social justice movement “a national crisis” comparable to 9/11. The hundreds of thousands of people mourning and marching across the country, unified by the simple concept that no life should be taken lightly, were seen by the FBI’s deputy director as similar to terrorists or members of organized crime operations.

The problem is bigger than Bowdich.

The FBI remains obsessed with dissident or radical voices on the left, while largely ignoring the violent extremists and the real terrorism threat on the far right, as recently revealed by an Intercept investigation that found “glaring disparities between law enforcement’s depiction of groups on the right and the left.”

When it came to analysis of left-wing groups, “law enforcement intelligence was often vague, mixed up in online conspiracy theories or untethered to evidence of suspected criminal activity”. When it comes to the right, on the other hand, the documents showed “law enforcement agencies across the country sharing detailed and specific information on the mobilization of armed groups looking to use the unrest as cover to attack law enforcement and protesters and set off a civil war.”

This suggests to me that right-wing extremism presents a much more tangible, clear, and present danger than anything happening on the left.

Please see Out of the Barrel of a Gun by Charles Homans at the New York Times. We are all increasingly at the mercy of angry, heavily armed people — mostly men — who fervently believe they have a constitutional right and patriotic duty to destroy the government and anyone who supports it as the heavily armed people see fit. The “constituion,” in this case, is an amorphous thing that exists in their imaginations and bears no resemblance to the document drawn up and ratified in 1789, but good luck explaining that to them.

The only thing that’s stopped these specimens from being an even bigger threat is that they’ve been more of a culture than a movement, at least until recently. Trumpism and the pandemic have given them direction and focus. Mary McCord writes in the Los Angeles Times:

Since the onset of the pandemic, paramilitary groups have engaged in armed intimidation and threats at statehouses, governors’ mansions, and public health officials’ homes in opposition to public health orders. They have endangered public safety — with fatal results — by self-deploying to “protect” property from what have been largely false rumors of antifa violence during racial justice demonstrations. Six men involved with a private militia have been charged with plotting to kidnap Michigan Gov. Gretchen Whitmer and try her for treason. These groups are trained and organized for the sort of violence that occurred on Jan. 6. Support for Trump has often been at the core of their online rhetoric, and Trump’s apparent encouragement of their activities has been used to normalize their extremist views for broader appeal.

The Capitol siege reveals something that many have been willing to ignore for too long: the involvement of paramilitary organizations that often refer to themselves as “patriots” with extremists who openly advocate for and commit violent attacks to intimidate and coerce. Many condemn the latter as domestic terrorists, and indeed, the U.S. Code defines domestic terrorism as activities that involve crimes of violence committed with the intent “to intimidate and coerce a civilian population” or “to influence the policy of a government by intimidation or coercion.” But few have been willing to acknowledge that some paramilitary organizations and their members have advocated for and committed acts that meet the domestic terrorism definition.

Few have been willing to acknowledge that a bunch of American-born white guys who wave the flag and call themselves “patriots” could be domestic terrorists. But they are, and they have been for a long time. Maybe they’ll finally be recognized as such. 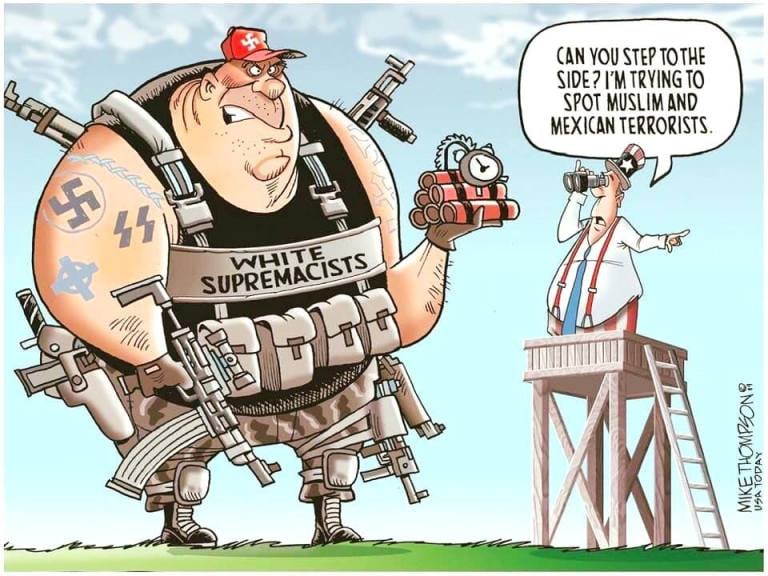 Enrique Tarrio, the leader of the Proud Boys extremist group, has a past as an informer for federal and local law enforcement, repeatedly working undercover for investigators after he was arrested in 2012, according to a former prosecutor and a transcript of a 2014 federal court proceeding obtained by Reuters. …

… Tarrio, in an interview with Reuters Tuesday, denied working undercover or cooperating in cases against others. “I don’t know any of this,” he said, when asked about the transcript. “I don’t recall any of this.”

Law-enforcement officials and the court transcript contradict Tarrio’s denial. In a statement to Reuters, the former federal prosecutor in Tarrio’s case, Vanessa Singh Johannes, confirmed that “he cooperated with local and federal law enforcement, to aid in the prosecution of those running other, separate criminal enterprises, ranging from running marijuana grow houses in Miami to operating pharmaceutical fraud schemes.”

6 thoughts on “Some of Us Warned This Would Happen”