Happy Armisitice Day! Here’s one of the later verses of “Battle Hymn of the Republic” that hardly anyone gets around to singing:

He has sounded forth the trumpet that shall never call retreat;
He is sifting out the hearts of men before His judgment seat;
Oh, be swift, my soul, to answer Him; be jubilant, my feet!
Our God is marching on.

Well, you may or may not be glad to know that we no longer have to appear before His judgment seat to have our hearts sifted out. Our Supreme Court has taken on that task now. The conservative judges have given themselves the authority to determine which religious views are sincerely held and which are not. Arguably, they are assuming God’s powers.

Do read Mark Joseph Stern, The Supreme Court’s Conservatives Finally Found a Religious Objection They Don’t Like, at Slate. (If you’ve exceeded your free article limit, just open the article in an incognito window.)

As you probably know, the conservatives on the Supreme Court have long favored religious belief over all other civil liberties.

… in recent history, the Supreme Court has emphatically refused to apply the slightest scrutiny to religious objections. When Hobby Lobby claimed that allowing their employees to access IUDs and morning-after pills through their health insurance violated the company’s religious beliefs, SCOTUS did not question its sincerity. The conservative majority even adopted Hobby Lobby’s position that these forms of contraception cause abortions, which is empirically false. When a pharmacy asserted that selling Plan B violated its religious beliefs based on the same misunderstanding, the conservative justices didn’t blink. When religious employers said that filling out a form to exempt them from the contraceptive mandate would undermine their faith, SCOTUS nodded along. When a baker declared that providing a wedding cake to a same-sex couple infringed on his faith, these justices did not ask why, exactly, the sale of baked goods contravened the tenets of his creed. When a Catholic charity claimed that simply certifying LGBTQ people as fit foster parents clashed with the church’s principles, not a single justice probed its sincerity. And when health care workers protested the COVID vaccine on religious grounds, three conservative justices avidly embraced the validity of their objections.

There is an argument to be made that it’s not up to the courts to decide if someone’s expressed religious beliefs are held sincerely. And it’s not up to the government to decide which religions are authentic religions and which are maybe not, unless the church is breaking laws all over the place. But that’s what the Court is doing, because now it’s questioning the religious sincerely of a petitioner.

During arguments in Ramirez v. Collier, several conservative justices expressed serious skepticism toward the sincerity of a religious plaintiff’s faith. The difference between Ramirez and every past case? John Henry Ramirez is on death row, and his demand for a Baptist pastor in the death chamber has delayed his execution date. It turns out that these justices do think that courts can assess the authenticity of religious objections … but only when the objector is about to be killed by the state.

Note that I do not approve of the death penalty under any circumstances. Note also that the only reason Ramirez’ request delayed the execution date is that the state of Texas changed its own rules about pastors in death chambers and didn’t inform Ramirez until just before his scheduled execution. Some of the conservative justices suggested that Ramirez was just jerking the legal system around to delay his execution. Justice Thomas asked, “If we think that Mr. Ramirez has changed his request a number of times and has filed last-minute complaints, and if we assume that that’s some indication of gaming the system, what should we do with that with respect to assessing the sincerity of his beliefs?” Ramirez’ lawyer pointed to his client’s written petitions, saying they were all making exactly the same request. But that didn’t persuade anyone.

We might ask, what does Texas have against Baptist ministers in execution chambers? This Texas Tribune article from 2019 explains it:

The state of Texas has banned all prison chaplains from its execution chamber, days after the U.S. Supreme Court ruled that the state could not execute an inmate without allowing a Buddhist chaplain into the death chamber with him.

The high court last week halted the execution of Patrick Murphy, a member of the infamous “Texas Seven,” after Murphy claimed that the state was violating his religious rights by not allowing him to have a Buddhist chaplain in the room with him at the time of his scheduled death. The state only allows prison employees in the death chamber, and only Christian and Muslim clerics are employed with the state. During executions, a chaplain will often stand at the feet of the prisoner and rest a hand on his leg mouthing silent prayers.

The court stopped Murphy’s execution hours after it was scheduled to begin, ruling Texas could not execute him until his late appeal was considered unless the state provided a Buddhist spiritual adviser in the execution chamber. The ruling came less than two months after the same court decided against stopping the execution of a black prisoner in Alabama who requested a Muslim imam at his execution. Justice Brett Kavanaugh issued an opinion declaring that the exclusion of a Buddhist adviser was religious discrimination and proposed two alternatives for the Texas prison system: Don’t allow any chaplains into the execution chambers, or allow chaplains of all religions.

So, Texas just banned all chaplains/ministers/priests from executuion chambers. That settled that. I wrote about the Alabama case and the Muslim imam in 2019; see The Christian Jail Monopoly. The Alabama prisoner, Domineque Ray, was executed in February 2019 without his imam.

The four justices who expressed the most skepticism of Ramirez’s claims raised arguments that would never have flown in previous religious liberty cases. Justice Brett Kavanaugh, for example, suggested at one point that Ramirez might be denied a religious accommodation if granting it would increase the risk of something going wrong during his execution above “zero.” Several justices raised concerns that accommodating Ramirez’s religious beliefs would simply create too much work for the Court.

Too much work for the Court? Maybe we need to appoint a lot more justices to the Court to ease the burden. I hate to see people overworked.

I can sorta kinda see why Texas would not want to let strangers into the execution chamger. Maybe that person would try to interfere. But considering that Ramirez was sentenced in 2008, it seems to me there was plenty of time to do a background check on the minister, a pastor at the Second Baptist Church in Corpus Christi who has been ministering to Ramirez in prison for the past few years. Maybe they could even get the minister to sign a document saying he understands he is not allowed to interfere with executions. There are currently 197 prisoners on death row in Texas, and considering that it takes years for a sentence to be carried out, it shouldn’t be too burdensome on Texas to check out clergy who have been requested to attend executions. It seems such a small thing to do. 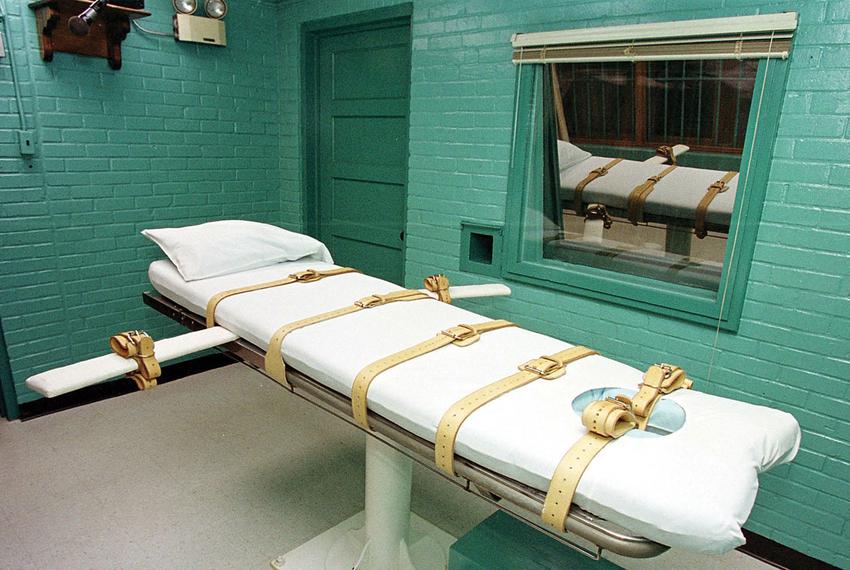