This is a shift that’s been going on for some time, driven partly by immigration but mostly by millennials. There is a long-standing pattern of young people skipping church attendance when they first leave home, but in the past they’ve returned to religious affiliation when they marry and have children. Millennials, however, are leaving religion and not coming back.

We’ve reached a point at which a reactionary faction among Christians appears to have taken over a large part of state and federal government, including the Supreme Court. They are now actively campaigning to either destroy or take control of the public school systems in conservative states. One wonders if this backlash to secularism and modernity isn’t partly driven by shrinking church memberships. Christians are losing control and feeling threatened.

A few years ago, there was much hand-wringing because the older, non-evangelical Protestant churches were losing members. Catholicism and evangelical denominations were doing fine. But Catholicism has benefited from immigration from South and Central America, which kept its numbers stable in spite of a loss of young adult members. And now evangelicalism is eroding.  “Only 8 percent of young people identify as white evangelical Protestant, while 26 percent of senior citizens do,” it says here.

A big reason for this shift, according to several researchers, is changing views on morality. Younger people are less likely than their parents to be knee-jerk homophobes, for example. Sex before marriage is now openly normal.  Conservative Christianity, with its rigidly absolutist Bronze Age moral code,  is increasingly out of touch with 21st century western culture. And culture is winning.

“Changing views about the relationship between morality and religion also appear to have convinced many young parents that religious institutions are simply irrelevant or unnecessary for their children,” it says here.

Those of us old enough to remember the Eisenhower Administration can probably remember when white Protestant Christianity was simply assumed to be America’s Religion, and white Protestantism dictated America’s accepted moral sensiblities. 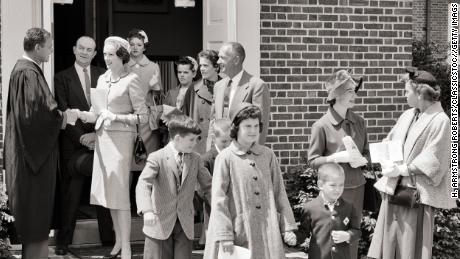 How white America saw itself, 1950s

Needless to say, between then and now there’s been a huge erosion of white Christian hegemony. Some People aren’t ready to accept this.

I suspect much of the corrupt state of U.S. Christianity can be traced to the rise of televangelism. Let’s face it; most televangelism is a freak show. It also made some well-known televangelists fabulously wealthy. This no doubt encourages them; religious freak shows make money. A kindly pastor tellng viewers to love their neighbors can’t compete with the likes of flamboyant Jimmy Swaggart, or with Joel Olsteen’s feel-good, guilt- and sacrifice-free prosperity gospel. But while these sideshow acts draw a lot of followers, they repel many more. If all you knew of religion is what you saw on television, you’d probably stay clear of it, too.

Earlier this week I wrote about the weird phenomenon of white evangelicals refusing to get covid shots. Writing in the Washington Post, Michael Gerson agrees that there is no Christian religious doctrine that discourages taking a covid shot. Just the opposite, actually; there’s an overwhelming argument to be made from Jesus’ words that people should just get jabbed.

Robert Jones of the Public Religion Research Institute, wrote that “in the upside-down world white evangelicalism has become, the willingness to act in self-sacrificial ways for the sake of vulnerable others — even amid a global pandemic — has become rare, even antithetical, to an aggressive, rights-asserting white Christian culture.” Golden Rule, anybody? Love your neighbor? Love your enemy, even? I guess not.

This objection to vaccines includes the widespread belief that the vaccines either contain aborted fetal cells (not true) or were originally cultivated in fetal cells. This is true of Johnson and Johnson, but the Pope says take it anyway. It’s not true of Pfizer or Moderna. And, anyway, whether Some People agree or not, there is no explicit biblical teaching forbidding abortions.

The objections of evangelicals to vaccine mandates is framed in the language of religious liberty. But, Gerson argues, that doesn’t fit. What the evangelicals are really arguing for is libertarianism, which has nothing whatsoever to do with Christianity. They have replaced Jesus’ moral and ethical teachings (which, you might recall, emphasized taking care of our neighbors, and everybody is a neighbor) with a libertarian position that individual rights supercede everything else, including the well being of others. And that the greatest evil in the world is government coercion, no matter what purpose is being served. “This is heresy compounded by lunacy,” Gerson says.

Over the last 70 years, Christian theology has been steadily replaced, within the evangelical world, by Republican or “conservative” ideology. … This shift is most obvious around the issues of gun rights and immigration. If you want to reject the foreigner, build a wall and own a private artillery, go right ahead. That is your right. But it is not your right if you sincerely want to follow the teachings of Jesus. We are not gun owners; we are pacifists. We are not provided with the gift of freedom and independence by God just to make sure no one else can have it.

As I wrote in the previous post, evangelicalism wasn’t always like this. Originally it was a big and very diverse movement. In the 18th century evangelism was defined by its emphasis on a personal relationship with God — without priest and church as intermediaries — and on a “born again” experience in which one makes a personal commitment to that relationship.

There have long been tensions between conservative and liberal movements within evangelicalism. In 19th century U.S., white southern evangelicals were marked by their support for slavery, while northern evangelicals called for Abolition. Some denominations split apart, some permanently.

“The root of the discord lies in the fact that many Christians have embraced the worst aspects of our culture and our politics. When the Christian faith is politicized, churches become repositories not of grace but of grievances, places where tribal identities are reinforced, where fears are nurtured, and where aggression and nastiness are sacralized. The result is not only wounding the nation; it’s having a devastating impact on the Christian faith.”

Wehner talked to many ministers and church leaders, many of whom have walked away from their former churches. “How many people look at churches in America these days and see the face of Jesus?” one said.

Wehner’s is a really excellent analysis of how contemporary evangelicalism came to be hollowed out of Christian doctrine and replaced by politics and grievance. Churches have been putting more effort into being entertaining — which keeps people in their seats and puts money in the offering plate —  than in teaching.

And large numbers of conservative white Americans who happen to be evangelical are insisting that their churches perfectly reflect their political views, or they will take their offering plate money elsewhere. This is more likely to happen among evangelicals, who have a long tradition of anti-institutionalism, than “mainllne” Protestants. The Southern Baptist Convention, for example, sees itself as a kind of confederation of independent churches rather than as a single hierarchichal organization.

Finally we get to Jennifer Rubin, who writes that Trump idolatry has undermined religious faith. Worth a look. Trump really is the Golden Calf.

Getting back to the projection that Christians will be a minority of Americans by 2050 — for a long time I’ve heard that Europe is “post Christian.” This doesn’t mean there still isn’t a lot of Christianity in Europe, but it’s no longer the default. For some time, a growing majority of younger Europeans are “nones” — no religious affiliation. This is especially true in western Europe. The “nones” are not necessarily atheist. They just don’t consider themselves to be Christians or part of any other religious tradition. This is happening in the U.S. also, although the U.S. is a tad behind Europe. This phenomenon is not happening in places dominated by other religions, however in particular Islam and Hinduism. Globally, Christianity is expected to experience a greater net loss in the coming years than other religions.

Between 2015 and 2020, Christians are projected to experience the largest losses due to switching. Globally, about 5 million people are expected to become Christians in this five-year period, while 13 million are expected to leave Christianity, with most of these departures joining the ranks of the religiously unaffiliated.

I could be wrong, but it’s possible that the influence of Christianity on culture and events peaked in the 19th and 20th centuries and is about to go into a decline. If so, it has only itself to blame.