Yesterday’s news that the Justice Department is really, truly investigating Trump for his role in January 6 was excellent news. The reactions to it today seem remarkably subdued. Maybe people are afraid to anticipate Trump might finally get justice.

It was especially gratifying to hear Merrick Garland say that Trump can’t get out of being prosecuted by declaring another presidential run. There have been a number of news stories lately saying that Trump might declare his 2024 candidacy way early, like any minute now. The early announcement might divert attention away from the January 6 committee and might protect him from criminal indictments, either from the DOJ or Fulton County, Georgia. And let us not forget he’s still being investigated for business fraud, for mishandling of classified materials, and for his SPAC (Special Purpose Acquisition Company).

I don’t think an early announcement would have the effects Trump might wish for. And a number of articles have pointed out that as soon as he declares he is a candidate for president he loses a lot of control of his $130 million Save America PAC. For that reason alone I suspect he won’t do it. He’s keeping most potential rivals on the back foot just by dropping hints.

Added to yesterday’s New York Times report about Trump campaign emails on the fake elector scheme — in which one lawyer noted it probably would be better to say “alternative” electors rather than “fake” electors — it was possibly not a good day for Trump. Raw Story reports that Trump threw a temper tantrum on Truth Social early this morning. 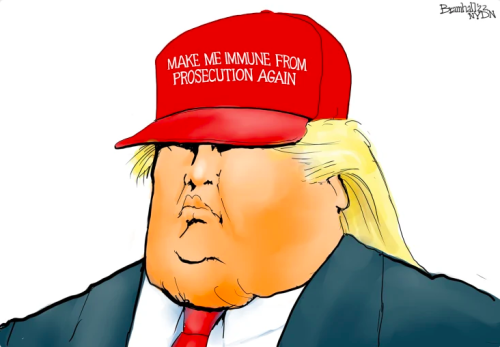 5 thoughts on “The Walls Are Closing in on Trump”