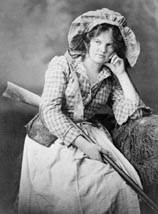 I wrote yesterday, in a mostly flip way, about the appeals court decision that struck down a DC gun control law. David Nakamura and Robert Barnes write for the Washington Post:

The panel from the U.S. Court of Appeals for the D.C. Circuit became the nation’s first federal appeals court to overturn a gun-control law by declaring that the Second Amendment grants a person the right to possess firearms. One other circuit shares that viewpoint on individual rights, but others across the country say the protection that the Second Amendment offers relates to states being able to maintain a militia. Legal experts said the conflict could lead to the first Supreme Court review of the issue in nearly 70 years.

Some time back I researched the history of the individual rights v. collective rights arguments. I don’t have my research findings any more (that was about four computers ago), but I do remember that the bulk of historical documentation and scholarship weighed in on the “individual” side. Yes, the wording of the clause is ambiguous. But if you put the writing of the amendment in a historical context, it seems the amendment was intended to protect an individual right to own firearms so that the federal government could not deprive states of their militias. (Under the Militia Act of 1792, every citizen enrolled in the militia must own and maintain his own firearm.)

As I said, I don’t have the research notes any more and I don’t have time to re-research the question. I do remember that a lot of early American documents and case law seemed to assume the right was individual, not collective.

The District’s law bars all handguns unless they were registered before 1976; it was passed that year to try to curb gun violence, but it has come under attack during the past three decades in Congress and in the courts. Yesterday’s ruling guts key parts of the law but does not address provisions that effectively bar private citizens from carrying guns outside the home. ….

…The suit said the ban on handgun ownership violates the Second Amendment, which states: “A well regulated militia, being necessary to the security of a free state, the right of the people to keep and bear arms, shall not be infringed.”

U.S. District Judge Emmet G. Sullivan dismissed the suit a year later, saying the amendment was tailored to membership in a militia, which he defined as an organized military body.

The case moved to the appellate court, with the National Rifle Association siding with the pro-gun faction, while the Brady Center to Prevent Gun Violence joined the District. Reflecting the case’s national importance, various state governments lined up on each side.

In the majority opinion, Silberman wrote that federal and state courts have been divided about the extent of protections covered by the Second Amendment. Some have sided with the District’s position, that a militia means just that. Others have ruled that the amendment is broader, covering the individual rights of people who own guns for hunting or self-defense.

The Supreme Court addressed the Second Amendment in 1939, but it did not hold that the right to bear arms meant specifically that a person could do so.

Yesterday’s majority opinion said that the District has a right to regulate and require the registration of firearms but not to ban them in homes. The ruling also struck down a section of the D.C. law that required owners of registered guns, including shotguns, to disassemble them or use trigger locks, saying that would render the weapons useless.

If this case does go to the Supreme Court, I suspect the SCOTUS will either decline to take it or uphold the appeals court decision.

One of the things “everybody knows” about liberals is that they are opposed to gun ownership. But this perception comes from NRA fundraising letters (the liberals are going to take away your guns!) not reality. For years this has been a great wedge issue for the GOP.

It turns out I wrote about the DC gun ban in September 2004. And in that I linked to this Harold Meyerson column —

Election Day approaches, which means it is time for House Republicans to run fully amok. Today, the House will take up a bill by Indiana Republican Mark Souder to lift the gun controls in the District of Columbia. Souder’s bill legalizes ownership of semiautomatic weapons and armor-piercing ammunition. How this would increase security around the White House and the Capitol is something that Souder and Co. have neglected to explain, but no matter. The House Republican leadership knows the bill won’t pass the Senate. The only reason it was even introduced was to force House Democrats — a number of whom represent gun-loving districts — to vote on this nonsense.

In other words, to vote against possession of armor-piercing ammunition near the White House makes one a “gun grabber.” The appeals court decision deprives the wingnuts of one of their talking points.

So far I’ve found no opposition to the decision on the Left Blogosphere. If the righties were hoping we liberals would be up in arms, so to speak, about this decision, I suspect they are disappointed. Ron Chusid writes:

In reviewing the reaction in the blogosphere it is clear, as anticipated, that intensity of support for the right to own guns is greater on the right. While this is a lower priority on the left, the sentiment is also with the rights of the individual. Even where bloggers have not commented it is noteworthy that there is no outrage over the courtâ€™s decision as would be expected if restriction of gun ownership was really a goal of liberals.

Ron links to several liberal bloggers who agree with the decision. These include Taylor Marsh, Matt Yglesias, Jeralyn Merritt, and (naturally) the Gun-Toting Liberal.

Personally, I agree with what Jeralyn Merritt wrote here:

In other words, there’s to be no cherry picking of the Bill of Rights. If one amendment is expendable, they all are.