I woke up thinking of this passage from an article Matt Yglesias wrote for Vox last spring, during the primaries.

But though Democrats are certainly the more left-wing of the two parties — the party of labor unions and environment groups and feminist organizations and the civil rights movement — they’re not an ideologically left-wing party in the same way that Republicans are an ideological conservative one. Instead, they behave more like a centrist, interest group brokerage party that seeks to mediate between the claims and concerns of left-wing activists groups and those of important members of the business community — especially industries like finance, Hollywood, and tech that are based in liberal coastal states and whose executives generally espouse a progressive outlook on cultural change.

Sanders’s core proposition, separate from the details of the political revolution, is that for progressives to win they need to first organize and dominate an ideologically left-wing political party that is counterpoised to the ideological right-wing Republican Party.

Well, Clinton certainly dominated the liberal coastal states, no question. Plus Illinois. And I understand she’s got Minnesota.

There’s a lot of finger pointing going on today, but until someone has time to do an in-depth crunching of the final numbers we don’t know that the third-party candidates made any difference. Jill Stein only got 1 percent of the popular vote. Gary Johnson got 3 percent, but my impression is that his support came more from Never Trump voters than Never Hill voters.

Here’s a graphic I borrowed from the New York Times that I think speaks volumes about what happened yesterday. 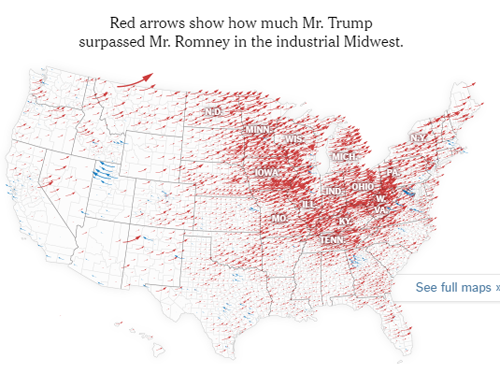 There’s your Electoral College loss, folks. The Dems needed most of those upper Midwest “rust belt” states, and she probably was counting on getting most of them. She got Illinois and Minnesota. Michigan hasn’t been called yet, but she’s behind there.

This map is revealing, also: 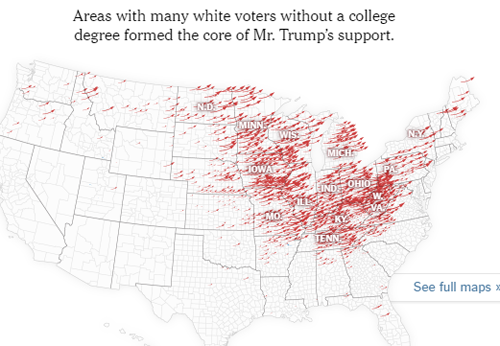 These are people the Dems have ignored for decades. The GOP hasn’t ignored them, however. The GOP is brilliant at manipulating them, and persuading them that down is up, the sky is orange and liberals are the boogeyman. It’s true that these voters often are not sophisticated thinkers, so they are easy to manipulate. And it’s true that there’s a lot of racism and xenophobia in this crowd.

But the Dems haven’t bothered to reach out to them in any meaningful way in many years. The Dems were too busy mediating “between the claims and concerns of left-wing activists groups and those of important members of the business community,” as Yglesias wrote. White blue-collar rust-belt folks were not part of that picture.

And yesterday those  white blue-collar rust-belt folks screamed out loud, We are still here. We matter. Pay attention to us.  As wrong as I think they are about Trump, I can’t really blame them.

A day or two ago some talking head on the teevee said that most voters couldn’t name five things Clinton stood for, but they knew what Trump stood for. I had said something like that to a Clinton supporter awhile back, and she pooh-poohed the idea and began to rattle off Clinton’s policy positions, which I knew as well as she did. But, I said, I don’t think most people who are not politics junkies are getting that information. And then I was told that if people were too lazy to study Hillary Clinton’s website to learn how wonderful she is, that was their own fault.

Harry Truman wouldn’t have made that mistake.

But the problem isn’t just Hillary Clinton, but the whole attitude of the Democratic Party. We’ve needed them to be an ideologically left-wing party for a long time. We’ve needed them to go to those rust-bucket states and sell people on progressive economics for a long time. And nobody bothered. The only messages received by most voters not in the liberal coastal states are ideologically right-wing messages.

Having spent most of the general election campaign season in Missouri, I can tell you that people here weren’t hearing any reasons to vote for Hillary Clinton. Almost all of the Clinton campaign ads on television here were intended to scare people away from voting for Trump. Obviously, that didn’t work.

A lot of the discontent here is about Obamacare. This is a state that didn’t expand it, of course, so genuinely poor residents don’t get it. And there’s a lot of genuine poverty here, especially in rural areas. I’m not sure people here in Missouri ever understood what Obamacare even is. They believe that whatever is screwed up about the health care system is the fault of Obamacare, because that’s what right-wing media keep saying, and they want it abolished.

I say the single biggest failure of the Obama Administration is its failure to communicate to most Americans what it was doing and why.

Now, a lot of this is a problem with news media going back many years. Most people get their information on television, and you and I know that books and books and books could be written about all the things wrong with television news coverage. It hardly mattered that the New York Times and Washington Post wrote big exposes on Trump as a failed businessman and cheat. None of that reached Missouri. It wasn’t on the television news that most people watched.

But I am old enough to remember when there were was a progressive Democratic vote even in the rural areas. The state went to Carter in 1976 and to Clinton in 1992 and 1996. Now all the Republicans have to do is run oppo ads with the words “liberal,” “Obamacare” and “Clinton” in them, and it’s over.

We’re probably going to be told (if they haven’t said it already) that Clinton under-performed with millennials and nonwhites compared to Obama. I expected nonwhites to come out and vote against Trump, big time, but I could have told them to not count on millennials. In fact, I believe I did say that from time to time.

For the past several years the Democrats have been assuring us that, some day, all the stupid old conservative, bigoted white people will die off and be replaced by younger, more liberal, voters. And then the Dems will be winners!

But now I’m watching the establishment Democrats kiss off a whole generation of voters, telling them to go home and play with their toys and leave politics to the grown ups. Good luck turning those people into Democratic voters in the future, geniuses.

Probably Clinton wasn’t hurt by Stein supporters as much as by left-leaning young people who just weren’t excited enough about Mrs. Establishment to go out and vote for her. And that’s on her, but it’s even more on the Democratic Party establishment that cleared a path for her to get the nomination.

The party establishment made a grievous mistake rallying around Hillary Clinton. It wasn’t just a lack of recent political seasoning. She was a bad candidate, with no message beyond heckling the opposite sideline. She was a total misfit for both the politics of 2016 and the energy of the Democratic Party as currently constituted. She could not escape her baggage, and she must own that failure herself.

Theoretically smart people in the Democratic Party should have known that. And yet they worked giddily to clear the field for her. Every power-hungry young Democrat fresh out of law school, every rising lawmaker, every old friend of the Clintons wanted a piece of the action. This was their ride up the power chain. The whole edifice was hollow, built atop the same unearned sense of inevitability that surrounded Clinton in 2008, and it collapsed, just as it collapsed in 2008, only a little later in the calendar. The voters of the party got taken for a ride by the people who controlled it, the ones who promised they had everything figured out and sneeringly dismissed anyone who suggested otherwise. They promised that Hillary Clinton had a lock on the Electoral College. These people didnâ€™t know what they were talking about, and too many of us in the media thought they did….

…The Democratic establishment is a club unwelcoming to outsiders, because outsiders don’t first look out for the club. The Clintons will be gone now. For the sake of the country, let them take the hangers-on with them.

Dems: In future nomination fights, assuming there are any, let the people decide. Oh, and kill the superdelegate thing. Thanks much.

I was wrong to think that Trump was such a terrible candidate even Clinton could beat him, but I wasn’t wrong to predict that the nomination of Hillary Clinton could signal the beginning of the end of the Democratic Party. That I saw pretty clearly. I just didn’t think it would happen this fast.