… it doesn’t matter which of the Democratic candidates for president now looks as though they might be able to appeal to Republicans, because none of them will. It won’t matter who they are or where they come from or what kind of talent they have. Once they’re run through the conservative media wringer, everyone on the right will despise them.

Which suggests that Democrats should do something radical and pick the candidate they like the best, not the candidate they think other people will like. Most Democrats like Ocasio-Cortez, so they shouldn’t be worried if Republicans hate her. Likewise, they shouldn’t freak out when Fox News and the rest of the conservative media start going to town on their nominee and whatever negligible approval that person has among Republicans disappears. It’s inevitable.

This is something I’ve written about before; see Ground Rules for Politics Nerds.  See also Matt Taibbi.

The role of “electability” has always been to convince voters to pick someone other than the candidate they prefer. The idea is to tell audiences which candidate has the broad appeal to win.

The metric pundits usually employ is, “Which Democrat could most easily pass for a Republican?” and vice-versa.

“Electability” tends to come up most in election seasons when the incumbent president is violently unpopular with minority-party voters. This is why people should be cautious now. With Democratic voters so anguished by Trump’s presidency they’ll pick anyone they think is the best bet to win, be on the lookout for experts pretending to know the unknowable — how the broad mean of voters will behave nearly two years from now.

Picking who we want, rather than who we think mythical “centrists” will vote for, is important for two reasons. One, as we should have learned in 2016, a lot of people are likely to sit out an election if the Dem candidate, or either candidate, isn’t somebody they feel good about voting for. Just a D after the name isn’t enough.

In the endless social media discussions of which candidate is “electable,” I keep saying that the one with the broadest and deepest genuine support among liberal/progressive voters can beat Trump, because the base will turn out for such a candidate. However, we don’t know who that person is yet. It will be several months before we do know. Don’t listen to anyone who says otherwise.

By genuine support I mean the person who actually embodies and expresses our hopes, ideals, and policy preferences. Not-genuine support is voting in the primary for the candidate the teevee ads keep saying can beat Trump, whether you like that candidate or not. I’m convinced Hillary Clinton won a lot of primaries with that argument.

The other reason to vote for the person we most want to be president is that winning the next election isn’t enough. The Democrats need to sustain power and build on it. As Martin Longman wrote awhile back, “Democrats have a pattern of losing their majorities at the first opportunity after they gain them. This happened in the 1994 midterms and again in the 2010 midterms.” I would add that every time Republicans take back a portion of government from Democrats they are even more crazy right-wing than they were before.

Even assuming the “safe” pragmatic incrementalist blah blah blah Democrat takes back the White House in 2020, and even if we take over both houses of Congress, if the Dems fritter away the next two years with small-bore incrementalist policies that mean little to most people, you can pretty much count on another midterm shellacking. And then we’ll be back to nowhere.

Going back to Paul Waldman’s column, it hardly matters what Democrats propose or what they do; the right-wing media will blast them for it. The next Democratic presidential nominee will be soundly denounced by the right-wing media infrastructure. She or he will be called radical, socialist (all of them; not just Bernie Sanders), America-hating, military-hating, God-hating, and crazy. Any policies she or he runs on will be socialist, job-killing, budget-busting (like they care), too expensive, ruinous, and will amount to giving undeserving people something they didn’t earn. It hardly matters how centrist or conciliatory the nominee might be, or whether, like Obamacare, the hated policy is one that originated on the Right and is based on conservative principles. The Right will pour fire and hate speech upon it, and Fox News regular viewers will be certain that if this terrible thing comes to pass, America is done. 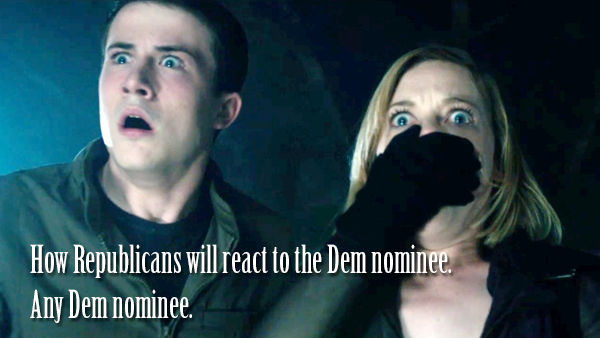 So, no more defensive nominees. Vote for the nominee you want to be president.

10 thoughts on “Speaking of “Electability””