Yesterday it was announced that 40 percent of new coronavirus cases were coming from just three states: Texas, Florida, and Missouri. Woo-HOO. Considering that Florida and Texas have much bigger populations than Missouri, this makes Missouri’s inclusion on the list of infamy all the more impressive.

If you look at new cases per 100,000 population over the past seven days, the picture is a little more complex. Josh Marshall writes that “Through this prism the crisis is overwhelmingly concentrated in three contiguous states along the Mississippi River: Missouri, Arkansas and Louisiana. Plus Florida.” Those four states are in a category of their own, he writes. Low vaccination rates are a big factor in these spikes but not the only factor.

The case rates track broadly with levels of vaccination. The Deep South has some of the lowest rates of vaccination and they’re getting hit the hardest. Meanwhile rates in the Northeast are about 1/10th what they are in Florida and those three Mississippi River states. But this shouldn’t prompt either a sense of superiority or relative safety. California is only a bit behind New York on vaccinations but their case rates are much higher. Florida’s rate of vaccination isn’t as low as you might think, certainly not so low as to explain the high case load on its own. Clearly there’s an interplay of vaccination density, mitigation and regionality. 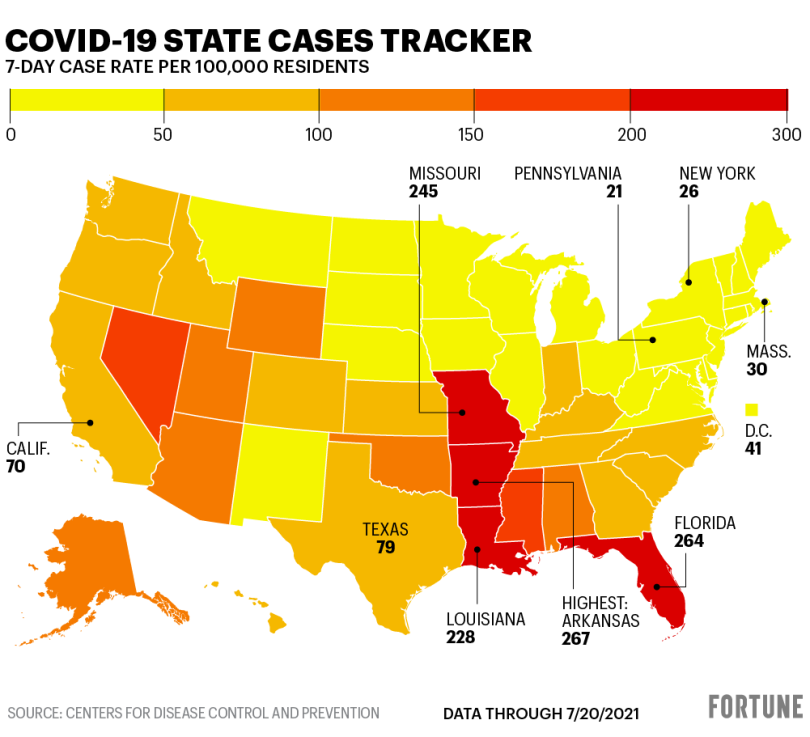 I can’t speak to the situation in Florida or elsewhere, but I have no doubt that a combination of low vaccination rates and the complete abandonment of any other mitigation factors — masks, social distancing — are the sources of the problem in Missouri.

Here in St. Francois County, as soon as it was announced by the CDC that people who’d been vaccinated could stop wearing masks, every mask disappeared from public view in spite of the vaccination rate being only around 30 percent. Maybe only us vaccinated people were wearing masks before the announcement. There was never any statewide mask mandate, and Gov. Mike Parson has written orders limiting the ability of county health departments to independently enact any sort of emergency pandemic restrictions.

And as I wrote a few days ago, I strongly suspect the Missouri spike was being generated in the popular vacation spots Branson and Lake of the Ozarks, where people get together and party like it’s 2019. But Delta is spreading far beyond those spots now.

(Lake of the Ozarks is a man-made late created as part of a hydroelectric project, completed in 1931, which has its own weird history.)

It doesn’t help that our utterly ineffectual governor has responded to this mess by blaming George Soros and the news media. (The link goes to a St. Louis Post-Dispatch editorial that I cannot access online, but maybe you’ll have better luck. I’m reading the print version.) These news agencies engage in “propaganda,” he said, pretty much ignoring that none have reported data that wasn’t generated by state agencies. The Soros claim was aimed at a news organization called The Missouri Independent, which has no connection to George Soros except in the minds of Missouri fever swamp creatures.

A few days ago the hospitals in Springfield begged the state to open off-site hospital space to take the overflow of cases. Gov. Parson responded, eventually, that the state would “probably” do it. But no action has been taken, as far as I can tell. I swear, the state would be better off if we’d elected a can of soup.

Speaking of the Missouri Independent, here is an interesting article on it today:

Amid the current surge in COVID-19 cases in Missouri, a recent Facebook conversation between two Republican state lawmakers is telling.

Around Independence Day, State Rep. Bill Kidd, from the Kansas City suburbs, revealed that he has been infected by the coronavirus.

“And no, we didn’t get the vaccine,” he wrote in a post that has since been deleted. “We’re Republicans ?”

State Rep. Brian Seitz, a Republican from Taney County, home to the tourist destination of Branson, commented on the post by falsely claiming that the virus had been developed by top government scientist Anthony Fauci and billionaire Microsoft founder Bill Gates. They “knew what was coming,” Seitz wrote.

“The jury is still out on the ‘vaccine’ (who knows what’s in that),” he wrote.

Not getting a vaccine is proof of partisan loyalty. There’s no hope.

And from here let’s go to David Frum, former Republican, who is pretty much disgusted with all this.

As cases uptick again, as people who have done the right thing face the consequences of other people doing the wrong thing, the question occurs: Does Biden’s America have a breaking point? Biden’s America produces 70 percent of the country’s wealth—and then sees that wealth transferred to support Trump’s America. Which is fine; that’s what citizens of one nation do for one another. Something else they do for one another: take rational health-care precautions during a pandemic. That reciprocal part of the bargain is not being upheld…

… Can governments lawfully require more public-health cooperation from their populations? They regularly do, for other causes. More than a dozen conservative states have legislated drug testing for people who seek cash welfare. It is bizarre that Florida and other states would put such an onus on the poorest people in society—while allowing other people to impose a much more intimate and immediate harm on everybody else. …

… But there’s no getting around the truth that some considerable number of the unvaccinated are also behaving willfully and spitefully. Yes, they have been deceived and manipulated by garbage TV, toxic Facebook content, and craven or crazy politicians. But these are the same people who keep talking about “personal responsibility.” In the end, the unvaccinated person himself or herself has decided to inflict a preventable and unjustifiable harm upon family, friends, neighbors, community, country, and planet.

I’ve been fed up for a long time. In my ideal universe there would be a new version of Reconstruction, in which the states with low vaccination and mitigation rates and which are trying to limit voting access revert to the status of territories. Then they can only be readmitted to the Union when they get their act together and commit to behaving responsibily. Well, I can dream.

In other news: Yesterday the Missouri Supreme Court decided the state government could not ignore the referendum passed by a majority of voters in 2020 to expand Medicaid per the Affordable Care Act. I’m surprised, considering this is the same court that decided innocence is no good reason to let someone out of jail. I’m betting the state government will still try to screw the voters, but we’ll see.

11 thoughts on “Irresponsible States Are Threatening All of Us”