Although I can’t find exactly when he said it, I clearly remember George W. Bush chirping that no free people ever chose to live under a dictatorship. And, of course, that was a stupid thing to say. History shows us lots of people living in a reasonably functional democracy who gave it up  — or took no steps to save it — in favor of an authoritative dictator. The rise of Hitler is the classic example, but not the only one.

With that in mind, do read The Fascist-Curious Right by Charlie Sykes at The Bulwark. Here’s just a bit.

Ideas that would have been unthinkable just moments ago are now being normalized and, if anything, the drift toward authoritarianism seems to be accelerating. This includes the explicit embrace of the idea of an American dictator — an American Caesar. Literally and seriously. (This is not a parody.) …

… But now its fetish for coups has morphed into a yearning for even more robust measures. “To survive today’s leftist threat,” argues author Christopher Roach, “we need to be committed to acquiring and using power in the service of a counterrevolution.”

This new “Great America” agenda means that we should be more like Portugal.

Here Sykes describes an article at the right-wing webzine American Greatness that celebrated Portugal’s “fascist-adjacent dictator” António de Oliveira Salazar, who was Prime Minister from 1932 to 1968. His government is most commonly described as “corporatist authoritarian.” “Soft fascism” might work also. He stayed in power by use of censorship and secret police. There certainly have been much worse dictators than Salazar, but he was still a dictator.

Yet, there’s more. Tucker Carlson recently has been promoting Hungary’s Viktor Orban as the kind of guy we need now. Jonathan Chait:

He is laying down a marker in the highest profile way he can that Orban’s iron fist is the future the Republican Party should want. The splashy imprimatur of a Fox News prime-time personality, who is probably the right’s most influential media figure, is an important milestone in the Republican Party’s long evolution into authoritarianism.

Do read It Happened There: How Democracy Died in Hungary by Zack Beauchamp at Vox, from 2018. A bit:

One of the most disconcerting parts of observing Hungarian soft fascism up close is that it’s easy to imagine the model being exported. While the Orbán regime grew out of Hungary’s unique history and political culture, its playbook for subtle repression could in theory be run in any democratic country whose leaders have had enough of the political opposition.

It’s not for nothing that Steve Bannon, who has called Orbán “the most significant guy on the scene right now,” is currently in Europe building an organization — called “the Movement” — aimed at spreading Orbán’s populist politics across the continent. …

…Hungary is a warning of what could happen when a ruthless, anti-minority populist backed by a major political party is allowed to govern unchecked. Americans need to pay attention.

So, yeah, the American Right is authoritarian and not democratic. What else is new? But why?

The Right claims to be all about freedom. I’ve been writing for a while (example) that they’ve fetishized the word freedom so much that it’s stripped of all meaning. Now it’s just a tribal symbol that has nothing to do with, you know, freedom. To a rightie, the word means something closer to privilege, or maybe license. Or power.

Ultimately, this is all very childish. The Right in many democratic countries around the world are engaged in some kind of massive temper tantrum. They don’t want to share their countries with nonwhite people, for example. They don’t want to be inconvenienced by things like covid or global climate change, and they want those problems to just go away. Maybe if we pretend they don’t exist, they will.

Edward Luce writes at the Financial Times that Covid has shown up western democracy’s childish tendencies that I recommend. The childishness is not limited to the Right. However, IMO this rush to authoritarianism is the Right’s longing for a daddy figure to take care of them. That’s Trump’s basic appeal; they see him as the tough guy who will beat up the father of that other kid they don’t like.  Seriously, look at the fan art. “The common thread here is that Trump is depicted as physically ripped, athletic and heroic – not unlike totalitarian posters of fascist regimes past.” Il Duce had better artists, though. 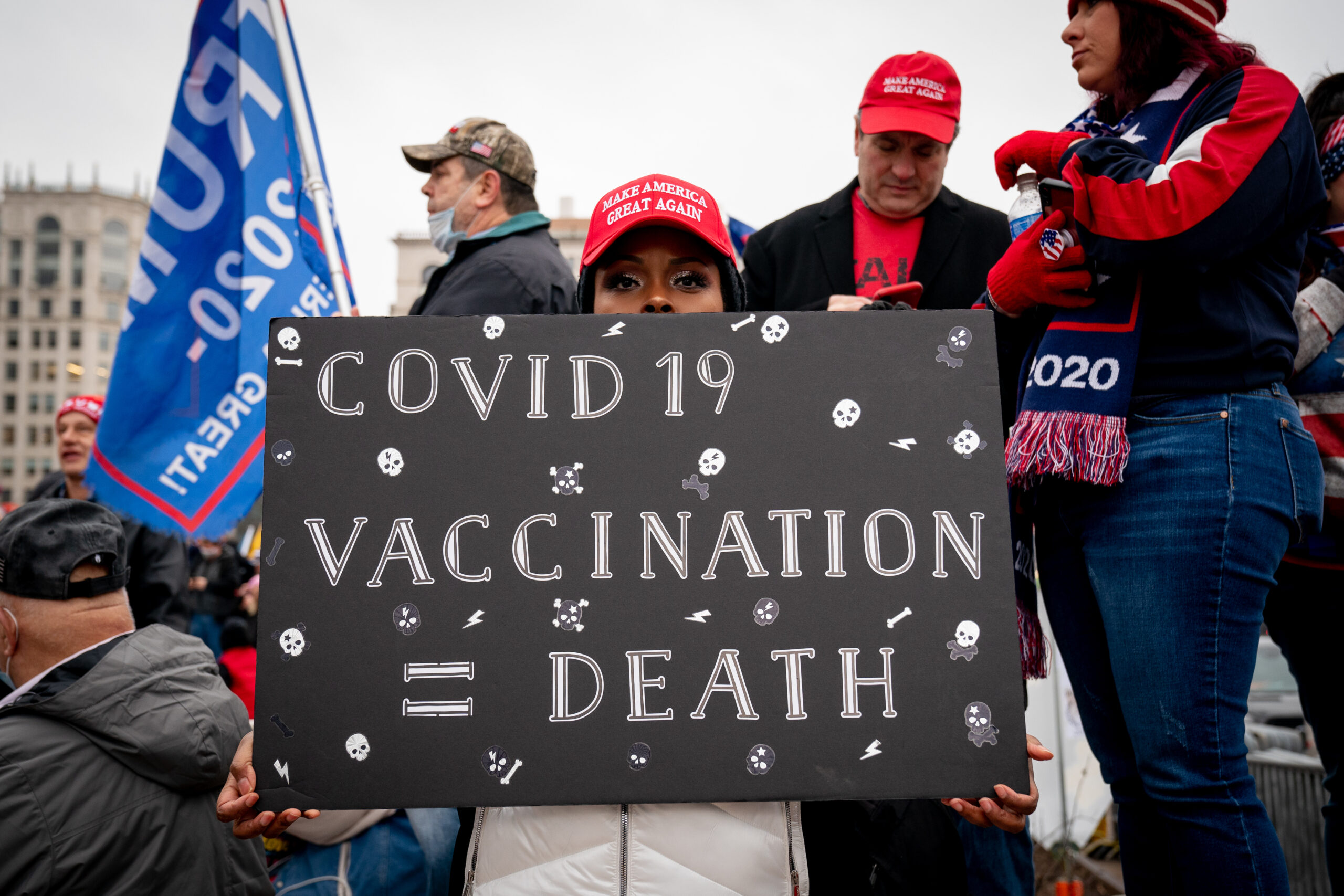 A supporter of U.S. President Donald Trump holds an anti-vaccine sign while protesting at Freedom Plaza in Washington, D.C., U.S., on Tuesday, Jan. 5, 2021. Washington’s mayor, Muriel Bowser, urged residents not to engage with any protesters “seeking confrontation” and requested National Guard help in anticipation of potential violence in tied to protests as Congress meets to certify Joe Biden as the next U.S. president. Photographer: Erin Scott/Bloomberg via Getty Images

11 thoughts on “Why the Right Wants an Authoritarian Big Daddy”