Take Chris Cillizza at CNN. Please. Today he parses something Rep. Cori Bush (D-Missouri) said and called her out for handing a “gift to Republicans.” The gift? Rep. Bush told an interviewer that she is paying for private security because of threats to her life (among other things, she was singled out and stalked by Marjorie Taylor Greene, which put a target on her back), and she also called for defunding the police and putting the money into more social services.

Yes, Missouri is a very Red state. But Bush’s district (all of the city of St. Louis and most of northern St. Louis County, which includes Ferguson) has been a safe Democratic House district for years. In fact, Missouri’s 1st Congressional District hasn’t elected a Republican since 1946. Bush won in 2020 with 78.7 percent of the vote. She won the primary against a long-serving and generally well liked Black male incumbent (Lacy Clay, in the House from 2001 to 2021) because she associated herself with Black Lives Matter as well as “defund the police,” and he didn’t. So, first off, that district is no more going to elect some Trumpy Republican next year than it’s going to fly off to Australia.

Even if Bush’s seat is safe, Cillizza says, next year Republicans might try to use some of Bush’s words to bash other Democratic candidates. But Missouri Republicans don’t need Cori Bush for that. They can just make shit up or go through the corrupt secretary of state or attorney general to initiate phoney investigations into Democratic candidates and use that to smear them.

Rep. Cori Bush — Don’t listen to Cillizza. You be you. It’s what your constituents want. And see also With Capitol Sit-In, Cori Bush Galvanized a Progressive Revolt Over Evictions. In brief, Rep. Bush played a big role in nudging the Biden Administration to extend the eviction moratorium this week.

Also this week, progressive and Bernie Sanders associate Nina Turner lost a congressional primary in Cleveland to Shontel Brown, who’d been endorsed by Hillary Clinton. The race was labeled a “proxy war” between the progressive and establishment wings of the Democratic Party. As soon as Turner conceded all manner of pundits celebrated the comeuppance of Turner.  Nina Turner’s loss in Ohio means Biden doesn’t need to keep caving to the left, raved James Hohmann, for example.

People closer to the 11th congressional district said that the locals didn’t see it as a “proxy” war about anything.  Remarks Turner had made about Joe Biden during the general election campaign in 2020 didn’t sit well with a lot of people, probably including many who lean progressive. Bernie Sanders hmself was wholeheartedly supporting Biden at the time. 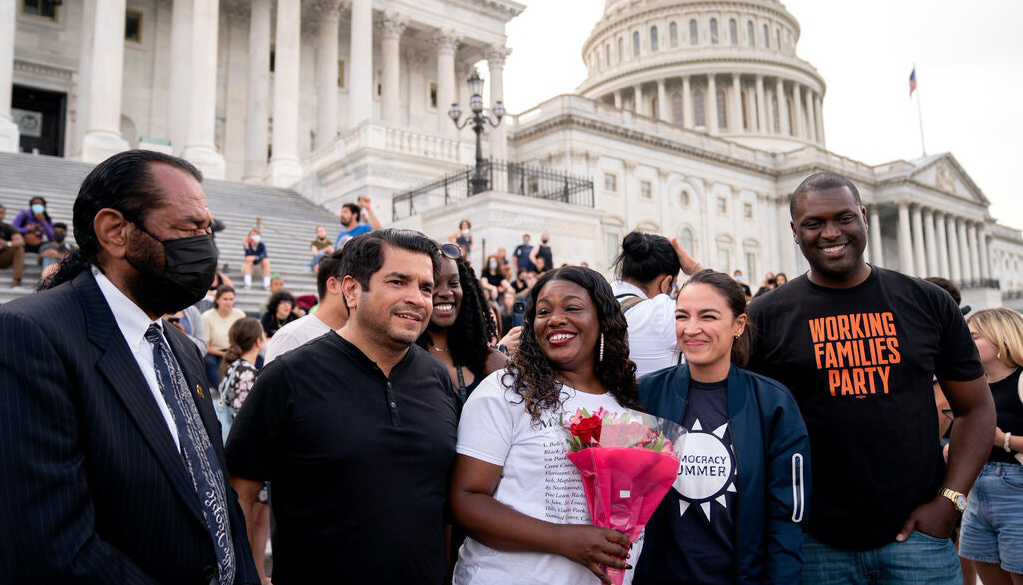