I am not hearing about polls in the race for the Republican U.S. Senate nomination in Missouri, which is an open seat since Sen. Roy Blunt is retiring. I don’t believe there has been any public polling. But I take it from articles in Politico today that former governor Eric Greitens is ahead, according to internal polling.

This surprises me, because I never hear about Eric Greitens. On the other hand, another candidate, Attorney General Eric Schmitt, is in the news every day. He has been vigorously grandstanding over “tyrannical” covid restrictions and suing school districts that won’t drop mask mandates. He likes to file attention-grabbing lawsuits, such as a recent one about the admission and parole of refugees at the southern border,who are minor children. (Last I heard, Missouri does not border Mexico.) One could argue he’s using his office and the taxpayers’ dime to campaign. But one hears his name so much I would have assumed he was the front runner.

The other current candidates of note include Mark McCloskey, who has been blessedly invisible lately, and U.S. Representative Vicky Hartzler, who has a long history of campaiging against same-sex marriage and Planned Parenthood. I had never heard of her until recently — her district is in another part of the state — but she may become a contender, as I will explain in a bit.

The state Republican party does not want Greitens to be the nominee, because they believe he would be vulnerable in a general election. A recent head-to-head poll found him only 4 points ahead of the current Democratic front runner, Lucas Kunce.  The article doesn’t say if there has been head-to-head polling with Schmitt or McCloskey against Kunce. I had never heard of Kunce before last year, but from what I’ve seen so far, he’d be an excellent senator. Barring some unfortunate turn of events, he’s got my vote in the primary.

Greitens is a slimebag, no question. But it also makes me crazy that news media keep saying he resigned because of a sex scandal. No, he did not. Conventional wisdom in these here parts was that he could have survived the sex scandal. I say he resigned because the Missouri House was investigating him for possible campaign finance violations, and when a judge ordered him to turn over documents from his dark money fundraising group, he resigned almost immediately. Like, later that same day. He had also been charged with computer tampering to hide the dark money donations, and when he resigned the charge was dropped. This suggests a more compelling reason for the resignation than the lady who complained about being tied up to exercise equipment in his basement and molested. She wasn’t planning on pressing charges, as I recall, and without a trial the episode would have faded from the news. See Bad Coverage of the Greitens Resignation from May 2018.

The Greitens issue has put our other senator, Josh “Fist Pump” Hawley, into an awkward position. Hawley was the state attorney general in 2018, and he investigated Greitens for campaign finance violations. I understand that the Hawley investigation brought about the computer tampering charge. Hawley was staying away from endorsing anybody, but over the weekend he endorsed Vicky Hartzler. Why Hartzler and not Schmitt or even McCloskey I do not know.

But then as soon as Hawley announced his endorsement, he was slammed by another candidate for Roy Blunt’s seat, U.S. Rep. Billy Long of the 7th district, which includes Branson. Long is a loyal Trump factotum who supports whatever Trump supports and opposes whatever Trump opposes. The Springfield News-Leader reported,

A frequent user of Twitter, Long has posted several times in recent days about Hawley and Hartzler. He criticized both of their camps for selling merchandise not made in the United States, and pointed to Hartzler’s previous vote on “The Great American Outdoors Act.”

“PS I voted for it if you’re taking notes,” Long wrote.

Whatever. It must be that Hartzler is polling better than Long. 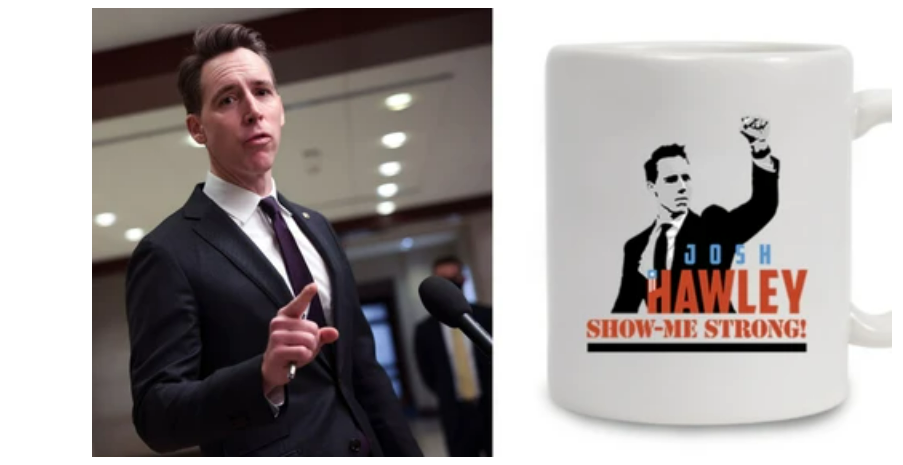 I can’t even. And I don’t know where he gets his merch made.

The other factor is, of course, the Trump endorsement. Politico reports that Republicans want Trump to endorse Hertzler (why not Eric Schmitt? His polling must be terrible). The consenses is that if Trump does endorse Hertzler, she wins the primary.

“But Trump feels burned by some of his previously endorsed candidates who’ve fizzled out, and has been reluctant to wade in unless he’s sure he’s backing a winner,” says Politico. This doesn’t exactly speak well to the power of Trump’s endorsement.

In another Politico article, I learn why I haven’t seen any campaign ads on television yet.

Unlike other crowded Republican races where Senate candidates and their super PACs have already spent tens of millions of dollars on ads, the airwaves in Missouri are quiet. Instead, the campaigns have been battling it out at grassroots events and on their own social media platforms, with no one emerging yet as a clear front-runner.

I hope that continues for a while.

In other Missouri news: Glenn Thrush writes for the New York Times that the Justice Department yesterday sued the state for attempting to nullify federal firearm law.

The Second Amendment Preservation Act, enacted last year, provides for penalizing law enforcement agencies that knowingly enforce federal gun laws within the state with a fine of about $50,000 per violating officer. The blatantly unconstitutional Act explicitly states that any federal laws, executive orders or other federal regulations used to track or take away firearms from law-abiding citizens will be considered void in Missouri. This is nullification on its face, even as Gov. Parson and A.G. Schmitt insist it isn’t. Right; and this is not a duck.

St. Louis filed suit against the state over the law last June, and in December the U.S. DOJ filed a brief in support of the St. Louis suit. Glenn Thrush writes that the state Supreme Court was hearing arguments on the St. Louis suit, and the lawyers were nearing the end of their presentations.

The suit came two days after lawyers in the Missouri case began wrapping up their closing arguments before the state Supreme Court, and Republicans were quick to suggest the Justice Department’s suit was intended to pre-empt a possible loss in the state court.

This is the same state supreme court that thinks “actual innocence” is not a valid reason to let someone out of prison. I wouldn’t trust them to know the supremacy clause from a toaster.

On the other hand, I am pleased to report that the “Make Murder Legal” act I wrote about a few days ago has died in committee. Maybe it won’t come back.